A recent survey finds utility regulators contradicting themselves on the touchy subject of nuclear power. They say they like new nukes, but their actions belie their stated beliefs. 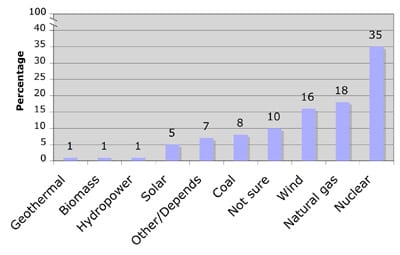 Earlier this year the San Antonio City Council, acting in its capacity as the regulator for municipal utility CPS Energy, approved a deal terminating the utility’s participation in the planned two-unit, 2,700-MW expansion of the South Texas Project (STP).

The reason: Project costs for STP’s Units 3 and 4 had reportedly soared to an estimated $10 billion. Of course, costs continue to be nuclear power’s Achilles heel. After all, it was soaring costs, not the Three Mile Island (TMI) meltdown, that killed the nuclear industry back in the 1970s. The TMI accident took place in 1979, eight years after the last order had been placed for a new nuclear power plant. Inability to deliver projects on time and on budget mortally wounded the nuclear industry; TMI was just the final blow that put the patient into the proverbial coffin.

Will soaring costs once again kill the nuclear industry? Are STP Units 3 and 4 a harbinger of the much-discussed "nuclear renaissance"? Sought by some and fought by others, the "nuclear renaissance" carries with it the prospect of tens of billions of dollars of equipment purchases, construction, and after-market services work. But the much-discussed nuclear renaissance has proceeded at a far slower pace than its supporters had hoped. Not even well-publicized and hotly debated concerns over climate change have produced the widespread U.S. nuclear renaissance talked about since the 1990s. There are major industry plans afoot for new nukes, applications for licenses at the Nuclear Regulatory Commission (NRC) to build and operate more than a score of new plants, pending requests for approval of new reactor designs, and new federal subsidies worth billions of dollars. No new plants have actually been licensed and started construction. Nuclear power remains a bet-the-company proposition, stubbornly resistant to efforts to manage its costs, risks, and delays.

In 2007, when STP’s owners applied to the NRC for a license to build Units 3 and 4 at the existing site of Units 1 and 2, the new units were projected to be online in 2014 and 2015. Now the estimate is that those units will be online in 2016 and 2017. The NRC has yet to issue a license for the new units, which propose to use two 1,350 Toshiba advanced boiling water reactors.

So when RKS asked public utility commission regulators and their staffs which types of future electric power generation most effectively balanced consumers’ need for low-cost energy with minimal environmental impact, there was a clear preference for nuclear power over natural gas, wind, and coal.

Given all that support from regulators, it would be reasonable to suppose that lots of nuclear projects would be under construction, right? Wrong. Instead, construction of gas and wind projects continues to dominate the electric power generation business. More than 6,700 MW of new wind projects came online in the U.S. over the past 12 months, according to data from Industrial Info Resources (IIR). IIR also notes that gas generation surged in the past year, when more than 10,400 MW of new generation came online in the U.S.

Yet regulators say they prefer nuclear over both wind power and gas-fired electric generation. Why did the 107 respondents in the RKS survey vote the way they did? Concerns over climate change were approaching a fever pitch in late 2009, when RKS fielded its survey. It would be reasonable to assume that some of those concerns were reflected in the regulators’ responses.

That would be known as giving a socially conditioned response, where a respondent answers a question in ways that are felt to be consistent with the dominant values and norms of a particular society. For example, if asked, "Do you pay your fair share of taxes?" most people would answer "Yes" because our society values fairness, however "fairness" is defined.

I certainly don’t think regulators were willfully misleading the surveyors when they expressed support for nuclear power. More likely it was another example of how easy it is to express support for something that is far away and largely hypothetical. Building nuclear generators might be akin to balancing the federal budget: a long-term proposition that sounds reasonable—until it comes time to make hard decisions. Balancing the federal budget would require a combination of tax increases and program cuts—who wants that? Building nuclear generators will cause utility prices to increase, perhaps quite dramatically—what regulator wants that?

The stalled nuclear renaissance calls to mind an old saying: Everyone wants to go to heaven, but no one wants to die. Although metaphors invoking death tend to be unpopular, that doesn’t mean they’re not right. If we want to get to the nuclear promised land, we may have to experience some discomfort along the way.

—John Egan (720-949-4906) is founder and principal of Egan Energy Communications, which works with utilities and energy-information firms to improve the impact and lower the cost of their stakeholder communications. He is a former research director at E Source, media relations supervisor at Salt River Project, and reporter at Energy Daily.