Nothing better illustrates the way the legislative sausage machine works in Washington than the so-called "emergency war supplemental" appropriation bill that Congress was considering at this writing. The most notable aspect of the $59 billion appropriation—which easily passed the Senate, 67-28 in late May—is how much it contains that has nothing to do with our troops in Afghanistan and Iraq, its ostensible purpose.

For MANAGING POWER readers, what best makes this point is that the measure includes $9 billion each for new loan guarantees for nuclear power and renewable energy projects. President Obama surely will sign the bill, once it passes the House, and the House and Senate versions are reconciled, despite the administration’s saber-rattling objections to funds for a second engine for the F35 joint service fighter jet.

The jet engine is a classic example of the power of pork. The plane already has an engine, the Pentagon doesn’t want a competing power plant, and neither does the White House. The military says the current Pratt & Whitney engine is just fine, but GE and Rolls Royce want continued development of their offering, which the administration says would add $465 million to a project where costs are already spiraling out of control. The money for the second engine has absolutely nothing to do with the current fighting in Afghanistan and Iraq.

And that brings us to the nuclear and renewables loan guarantees, largely a product of Texas legislators seeking to get federal government backing for NRG’s proposed two-unit addition to the existing South Texas nuclear project. More pork? Sure, but not surprising. The additional funding has White House support, despite its lack of relevance to anything remotely approaching an emergency. No troops will be in jeopardy if the loan guarantee pot is not doubled.

Now, to be fair, that loan guarantee authority doesn’t mean $18 billion in new spending, only $180 million. That’s what it will take for the Department of Energy and Secretary Steven Chu to administer the new loan guarantees, according to the Senate-passed bill (HR 4899). The new guarantees come on top of a similar amount authorized for the nukes way back in 2005.

Those earlier loan guarantee authorities have yet to produce tangible, concrete-on-the-ground results. At this writing, the first guarantee, some $8 billion to Southern Co. for a two-unit expansion of its Vogtle nuclear station (photo), was still in the negotiation stage. It isn’t clear what the hang-up is, but the administration in mid-May granted a 30-day extension to the negotiations. What’s going on appears to be what one wag has called "trading horses in a smoke-filled room." 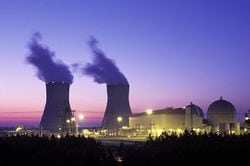 Southern Nuclear’s Plant Vogtle was selected for an $8 billion loan guarantee for construction of Units 3 and 4. The negotiations continue. Courtesy: Southern Nuclear

It’s also the case that the new energy loan guarantees in the emergency military appropriations bill represent a bit of a retreat from what nuclear power backers, including the Obama administration, were seeking. Obama budget director Peter Orszag said the new loan guarantees in the emergency bill will be subtracted from the $35 billion in new guarantees the administration was supporting in its 2011 budget proposal to Congress. Give with one hand, take with the other?

I guess I’ve been around too long to be surprised by such maneuvering. But it still troubles me that legislative procedure is something so complex and messy that average citizens have no way of grasping it, and would likely be appalled at the process and the consequences if they did.

Then there are the loan guarantees themselves. Put the process aside. The promoters and protectors of market-based approaches to government somehow don’t get that federal loan guarantees are further examples of Uncle Sam picking winners and losers in the marketplace. New nukes are so important to some solons that abandoning sound governmental principles is second nature. Can you say "hypocrisy?"

What’s more, the track record of energy loan guarantees does not inspire confidence that the bureaucrats will pick the best projects. The Carter administration’s failed synfuels program—the most significant energy initiative the administration and the Democratic Congress put together after the fall of the Shah of Iran in 1979—was built on loan guarantees aimed at creating alternatives to crude oil. They simply didn’t work. But they attracted some doozies among projects seeking support, including one to turn peat into the energy equivalent of coal.

Nor is there any guarantee that Wall Street will automatically pony up the capital to build new nukes, just because some of the debt has the Good Housekeeping seal of the federal government. Suppose that a new administration decides to reneg on a loan guarantee for a nuclear project that has gone sour. What’s the lender’s recourse?

Take a look at the government’s nuclear waste fund for a scary answer. (See "The U.S. Spent Nuclear Fuel Policy: Road to Nowhere" in POWER’s May issue.) Even a series of federal court rulings has not moved the government to live up to the promises—in contracts—it made to nuclear utilities under the ill-conceived Nuclear Waste Policy Act, another lameoid idea from the 1980s.

One of the things I learned about procurement when I worked for the government is that the federal government is sovereign. It can do what it wants, contracts to the contrary notwithstanding.