Most original equipment manufacturers (OEMs) have had decades to come to terms with the intricacies of the wind industry. As they slowly ramped up from small sub-100-kW machines to the megawatt range, they learned the necessities of fleet operations. Those fleets typically took a decade or two to move beyond a gigawatt.

Such was not the case with Clipper Windpower. Far from starting small, its first machine was the 2.5-MW Liberty turbine, which was first installed serially in 2007. Already, about 500 of these machines have been deployed to bring its total installed capacity to over 1 GW.

Moving up in scale this rapidly required an accelerated ramp-up of technical resources and the creation of a fleet services operation from scratch. Despite the challenges, and some early setbacks (see "The Return of the Clipper Liberty Wind Turbine" in POWER’s December 2008 issue), the fleet has been operating at above 95% availability over the past 12 months.

"We are on track to accomplish the corporate goal of 97% availability by the end of 2010," said Larry Willey, vice president for operations, maintenance, service and warranty (OMSW) at Clipper. "Experience has helped us identify lower O&M cost opportunities."

Staffing Up from Scratch

The next stage was building a workforce capable of manufacturing hundreds of turbines each year, an installation team to erect those machines throughout the country, and a fleet services arm large enough to keep those machines running and its customers happy (see figure). 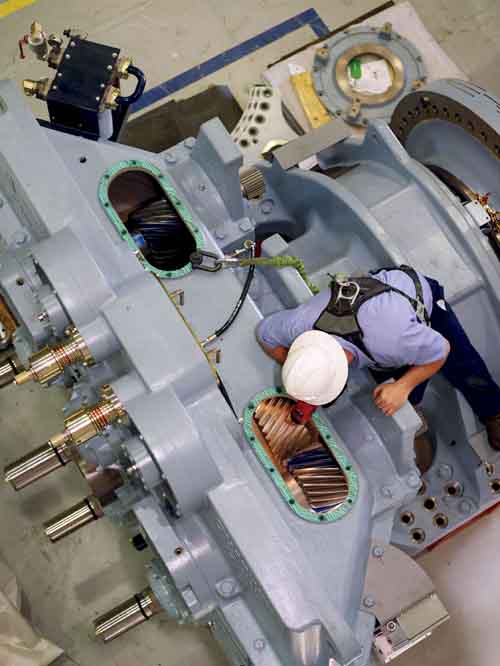 But finding a workforce with wind energy expertise isn’t that easy. Last year, the U.S. alone placed 10 GW of wind power online. With the expansion of wind in the U.S. also came a shortage of qualified wind technicians, managers, and general staff. So where do the resources come from to fulfill an ever-expanding demand? Clipper found an invaluable source: ex-military personnel.

"When faced with the daunting task of building a workforce in such a short timeframe, I turned to military recruiters," said Jeff Maurer, vice president of project management operations (PMO) at Clipper, who served in the U.S. Marine Corps for 23 years and retired as a lieutenant colonel in 1993. "Former military personnel have the leadership and hands-on skills needed within the renewable sector."

He recalls that there were seven field service employees at that time with plans to install 8 turbines in 2007, 65 in 2008, and 348 in 2009. This level of growth meant that field services would have to grow at an exponential rate in order to have the required personnel to install, commission, and operate the expanding Clipper fleet.

The company worked out an initial plan to identify 10 to15 graduates from armed services academies for mid-level management roles as well as 40 technicians to fulfill installation and commissioning positions. The Clipper team focused on West Point, Naval Academy, and Air Force Academy graduates: men and women who had led divisions aboard naval vessels; Iraq and Afghanistan veterans who had served as troop leaders; and folks with special training that could prove useful in the building of a training program or in managing the transportation and logistics side of the business.

Clipper briefed military placement organizations in detail on what the job requirements would be. Job fairs were scheduled to attract this audience and find possible hires. This program has worked very well for Clipper. The organization grew from 7 in 2006 to 220 in 2009. Its site supervisors, for example, are retired Navy chief petty officers who have worked either on nuclear submarines or aircraft carriers, along with aviation technicians and machinists mates.

With its expanded team in place, the company says it met all its installation and commissioning milestones. Fleet services moved up to 300 staff in very short order.

With an expanding fleet and growing customer needs, in early 2010, Clipper’s fleet services team organized within two specialized segments. Jeff Maurer’s PMO group deals with construction, installation, and commissioning of new projects, which involves everything up to the commercial operation date (COD). Everything post-COD is handled by Operations, Maintenance, Service and Warranty, led by Larry Willey. Maurer peeled off about one-third of the staff for his team, and Willey has the rest to service a growing fleet. Once PMO commissions a turbine, it’s turned over to OMSW to look after—typically for the next five years—on behalf of the customer.

Willey explains that there are different considerations in the early part of the process that don’t fit well within OMSW’s primary mission. With the new arrangement, the PMO organization can concentrate on what it does best: getting new sites up, commissioned on time, and running efficiently. PMO also supports other functions within the organization, including project development and commercial operations. It even includes a project controls group that creates estimates, budgets, and schedules for new prospective opportunities and coordinates requests for proposals to develop new business for Clipper. OMSW, on the other hand, with a staff of more than 200, manages the remote monitoring center, the many maintenance techs, supervision of sites, and spare parts.

After coming on board last November, Willey noted that his first order of business was to cut down on time spent on warranty issues. He created a group called "customer data analytics and warranty" with the vision of eventually taking warranty-specific staff down toward zero. How? By performing detailed analytics of each machine and every issue, he says, common problems can be isolated and wasted effort can be minimized. Willey gave the example of finding repeated trouble with particular parts and then taking that data out to the supply base to bring about better quality control and longer part lifespan.

"It is up to us to represent the customer’s interests and do all we can to improve the quality of our products," said Willey. "Customer analytics also allows us to provide our customers with a lot more data and reports to show the operation of their fleets."

Clipper has taken this a step further by partnering with another company that specializes in preventive maintenance software and sensors for gas and steam turbines. As a result, the group is developing advanced algorithms for condition monitoring of wind turbines. In the area of material control, OMSW works closely with PMO to ensure that a material control person is on site during every installation and carries through to the post-COD phase of projects.

Another major thrust for OMSW was the creation of a field data analytics and remote monitoring and diagnostics group that supports better flow of component performance and practical fix information back up into the engineering and sourcing functions. Clipper officials say this enhanced communication has resulted in a number of product improvements benefiting new turbine production. It is expected to continuously accelerate product quality going forward.

Clipper says safety has always been its number one objective. The company stresses safety, quality, timeliness, and cost—in that order. It also borrowed a best practice from other top industries concerning "safety observations and conversations" (SOCs). Employees at a local level go to another work group to observe safety matters during the performance of regular work tasks. They then discuss what they observed, gain feedback from that work group, and submit a report.

"We demand four SOCs per site per month," said Willey. "This is beneficial for all involved since it places safety at the forefront, making it less likely for anyone to drop their guard and begin taking safety for granted."

In general, OMSW is more structured when it comes to the provisioning of workers at sites. Instead of some sites being overprovisioned and some being short of technicians, the deployment of personnel is now more precisely determined using a manpower model. This takes into account a wide range of parameters, including access (compact versus dispersed, as well as ruggedness of the terrain), number of turbines, and so on.

"If you right-size the number of support technicians needed, you cut down considerably on travel costs," said Willey. "Without this model, some of our technicians were traveling the equivalent of one full-time employee annually due to excessive deployment between sites."

In addition, several sites are now designated as regional parts depots. This has cut down considerably on both the amount of time it takes for a part to arrive at a site, as well as the overall cost of parts provisioning. "The bottom line is, our level of service has risen considerably," said Willey. "Better yet, our customers are very happy with the improvements that we’ve made."

Typically, wind turbine companies create regional managers to deal with the sites in their territories. But if a customer has multiple sites around the country, it can get pretty complicated when customers have to deal with different managers, depending on the location.

Clipper has instead designated managers for each specific customer. One of Clipper’s key customers, for example, has a single point of contact for Clipper for all its sites. It has 116 turbines across three sites, which are located in New York and Utah. Two more sites are coming online by year’s end, as are an additional six turbines in New York, an additional 16 turbines in Vermont, and 12 more at a site in Hawaii. Regardless of where the customer’s sites are located, the customer works with one Clipper OMSW manager.

"Our new processes are boding well with our customers," said OMSW Customer Manager David Howard. "We’ve received kudos for our success in improving our product, which is really proving its value in the field. At the same time, we’ve really refined our operations and identified a number of best practices that can be put to use throughout the Clipper fleet."

—Drew Robb is a Los Angeles–based writer specializing in engineering and technology issues.