For the first time since it began conducting sector outlooks, Moody’s Investors Service has downgraded the regulated utility sector from stable to negative. The new outlook reflects a surge in financial risks in the sector as more individual companies in the regulated space funnel funds to debt.

Using an analysis of 42 of the largest U.S. utility and power holding companies and 102 utility operating companies with at least 10 years of financial data, Moody’s concluded in a June 18 report that the outlook clearly points to a “declining financial trend” in the sector. The trend is a function of “higher holding company debt levels incurred in the last few years” as a result of lower cash flows, and “a lower deferred tax contribution to cash flow going forward due to tax reform.”

The outlook also takes into account uncertainty about when and to which extent changes will take place for regulatory recovery provisions, authorized returns, and equity layers, or self-help options by individual companies—which are scrambling to respond to lower cash flows.

“Regulated utilities will be exposed to a higher level of financial risk for the next 12 to 18 months” said Ryan Wobbrock, vice president and senior analyst at Moody’s on June 18. “For utility holding companies, the consolidated ratio of FFO to debt has been on a steady decline, from 19% in 2013 to 17% at year-end 2017, and we expect it to decline further toward 15% through 2019.”

In its report, Moody’s notes that holding company leverage—or borrowed money used to finance assets—is at its highest level since 2008, at the height of the financial crisis.

Holding company leverage has been increasing in recent years owing to “highly [leveraged] mergers and acquisitions” along with investments in non-regulated ventures, such as boosting the share or renewables, and midstream ventures. Some companies have also used holding company debt as a source for equity infusions into operating subsidiaries, the report says. The agency suggests that roughly $600 billion of adjusted debt was held by the peer group of 42 utility holding companies at the end of 2017. Consolidated ratio of debt to earnings before interest, taxes, depreciation and amortization, or EBITDA, was five times higher at the end of 2017 compared to 2008. The sector’s consolidated debt to equity ratio is 1.5 times higher than in 2008.

Another key factor involves the December 22, 2017-enacted Tax Cuts and Jobs Act (TCJA). Since 2010, Moody’s explained, holding companies have used deferred taxes to contribute about 14% to consolidated FFO. But because the TCJA slashed the tax rate to 21% from 35%, contributions of deferred taxes to FFO could plunge to around 8% through 2019. At utility operating companies, consolidated FFO to debt metrics could shrink from 17% to 15%.

“Utilities will collect less revenue from customers (since their federal tax expense is lower) and retain less cash via deferred taxes,” the report says. “Under the TCJA, utilities can claim less in depreciation expense for tax purposes and will have higher taxable income. Notwithstanding the change in law, we still expect holding companies to pay little or no cash tax in 2018 and 2019 because most have significant accumulated net operating losses driven by past claims of bonus depreciation, production tax credits from renewable generation or other tax offsets.”

Relief Will Likely Be Slow

According to Moody’s, while regulatory commissions and utility management teams are taking important steps to address increased financial risk, between 12 to 18 months may elapse before the majority of the sector shows any material financial improvements.

Utilities typically take two approaches to mitigate rising financial risk, it noted. One approach is to seek financial relief from regulators—which most companies have done in response to tax reform.

The Florida Public Service Commission has allowed several utilities in the state—including Florida Power & Light, Duke Energy Florida, and Tampa Electric Co.—to use customer refunds from tax reform changes to offset rate increases for restoration costs associated with Hurricane Irma. It also allowed Duke Energy to use a portion of savings to accelerate depreciation of existing coal plants. In Georgia, regulators allowed Georgia Power to increase its authorized retail equity ratio from 51% to 55%, which is the utility’s actual equity capitalization percentage, until the next rate case filing in July 2019.

In Alabama, regulators approved a plan designed to improve the Alabama Power’s balance sheet and credit quality over time by gradually increasing equity ratio to 55% by 2025, as well as to allow the company up to $30 million of excess deferred tax liability deferrals to offset under-recovered fuel costs, the report says. Other states have agreed to address the return of excess deferred tax liabilities to customers at a later date, which “adds a degree of uncertainty to the ultimate timing of any cash flow impact on the sector,” it notes.

The other approach to mitigate increasing financial risk involves “self help”—or “back to basics,” as it was known in the early 2000s, when companies shed unregulated assets. Under this approach, utility management teams tweak financial policies to improve cash flow, making efforts, for example, to cut operating or capital costs, issuing equity, reducing debt, selling non-core assets, or slowing dividend growth.

Among holding companies with a negative outlook that are considering selling assets include Sempra Energy, Dominion Energy, and Southern Co. Duke Energy and Dominion, prominently, have sought incremental capex reduction. 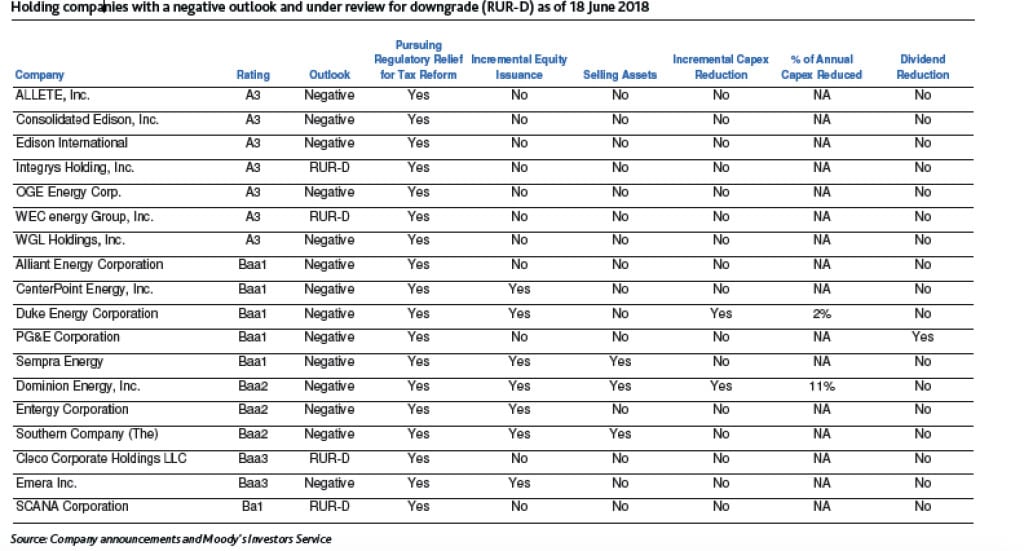 For now, utility companies will likely continue spending significant capital on their rate base to bolster investments in smart grid, system resilience, and carbon transition efforts, including a renewable expansion. “While many companies are estimating a steady decline in capital spending after 2018, our base-case projections assume that their capital spending will continue to increase, at about 5.0% each year, compared with a 2012-2017 compound annual growth rate (CAGR) of 5.7%,” the report says. Utility capital spending is often projected to decline, but it has actually grown annually since 2009, the report says.

“With respect to financial mitigation measures, we see more activity in the pursuit of regulatory cost recovery relief than we do with management teams executing material changes to financial policies,” said Wobbrock. “Thus far, there has been no discernible adjustments to dividend policies and most utilities continue to incorporate a heavy reliance on debt financing for their sizable negative free cash flow funding needs.”

However, the outlook could remain negative if key cash flow ratios continue to decline, or if there are signs that a more contentious regulatory environment is emerging. “A more contentious regulatory environment is one where litigation is the preferred path of regulatory proceeding (instead of settlements), or where the suite of authorized recovery mechanisms begins to become more limited. Lower authorized returns on equity do not, by themselves, signal a weakening regulatory relationship,” it said.

The agency noted that U.S. utilities are widely viewed as “critical infrastructure assets,” which means they have three times a lower probability of default than their non-financial corporate peers. “From a liquidity perspective, Moody’s incorporates a view that US investor owned regulated electric and gas utilities will maintain unfettered access to the capital markets,” it added.

“In addition, Moody’s continues to view regulated utilities as a defensive investment alternative in the event of a wide-spread, short-duration financial market shock. These factors provide the sector with a strong, investment grade credit profile, which continues to be the case, notwithstanding the negative sector outlook.”