The year 2008 is shaping up nicely for nuclear power in the U.S. Since September 2007, when NRG Energy and the South Texas Project Nuclear Operating Co. filed the first complete U.S. nuclear plant license application in 29 years with the Nuclear Regulatory Commission (NRC), a dozen more companies and consortia have followed suit. And with concerns about how to tackle climate change, as well as energy security playing a role in this year’s election debates, nuclear power is looking more attractive to many of those who influence generation planning decisions.

Voters, too, have shown increased support for new nuclear generation. According to an October 2008 Harris Poll, of about 2,700 Americans surveyed in mid-August, 49% favored new nuclear builds even though a 72% majority saw disposal of radioactive waste as a major problem. More significantly, only a third opposed new nuclear plant construction. This compares with 45% to 32% opposition voiced in a Harris Poll taken just after the accident at the Three Mile Island Nuclear Generating Station in Pennsylvania on March 28, 1979 — an event long considered responsible for a major setback to U.S. nuclear developments.

Industry enthusiasm has been warming up as well. In 2007, following NRG’s combined construction and operating license (COL) application, the Tennessee Valley Authority, Dominion, and Duke Energy submitted separate COL applications for five new U.S. reactors. So far, in 2008, the NRC has received 12 COL applications for 18 new reactors, the latest of which was UniStar’s October application for a reactor at its Nine Mile Point nuclear plant in New York. The regulatory agency is expecting four other applications by the end of 2009. If all are approved, the U.S. could be looking to build about 30 reactors that would provide more than 40 GW of new nuclear power within the next two decades. (Figure 1). 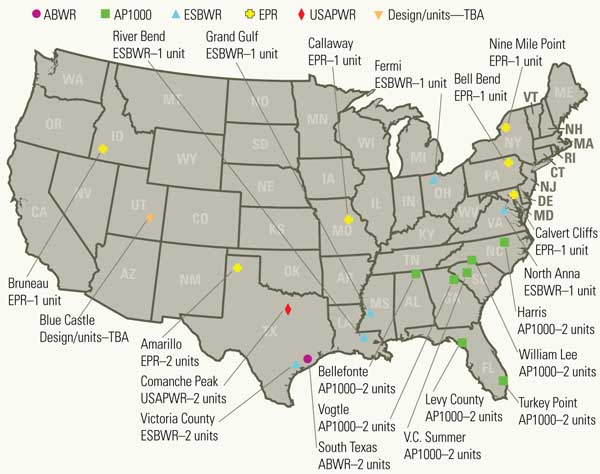 1.    Nuclear alphabet soup. Since the first complete combined construction and operating license (COL) was submitted in September 2007, the Nuclear Regulatory Commission has received 15 COL applications for 25 possible U.S. reactors. The regulatory agency expects to receive four more by the end of 2009. This map shows the proposed sites and reactor designs the companies will use. Source: NRC

The companies and consortia that have so far submitted their proposals have not committed to the new builds, and experts agree that not all proposals are likely to move forward in the short term because several challenges — including obtaining financial, technical, and human resources — remain unresolved. In late September, for example, 17 companies had responded by the close of the solicitation period for federal loan guarantees. Aggregate construction costs for the 14 proposed projects (21 reactors in all) would be $188 billion, the Department of Energy (DOE) estimated. Altogether, the companies have asked the DOE to provide $122 billion in loan guarantees — almost seven times the $18.5 billion it had originally allocated.

Industry think tanks are confident that heavy investment in nuclear energy would spur the economy. Specifically, it could create up to 350,000 jobs (Sen. McCain doubled this figure in the first presidential debate) and generate $542 billion in gross domestic product if 52 new light-water reactors are built over the next 20 years, says yet another report released this September by the American Council on Global Nuclear Competitiveness.

The number of jobs created during the reactor construction period could be 268,000, while a further 136,000 jobs could result from construction of fuel recycling and enrichment plants. Operation of the reactors and fuel plants would involve an additional 96,000 jobs.

But filling those jobs could be a problem. According to a March 2008 survey by the DOE’s Oak Ridge Institute for Science and Education, U.S. universities granted 729 undergraduate and graduate nuclear degrees last year — up from 480 in 1998. More recently, the American Physical Society found that the number of students enrolled in undergraduate nuclear engineering degree programs in the U.S. rose to more than 1,900 in 2007. However, with 35% of the current nuclear workforce reaching retirement age in the next five years, even if the number of nuclear power reactors remains the same through 2050, the industry is certain to have a labor shortage, that study concludes.