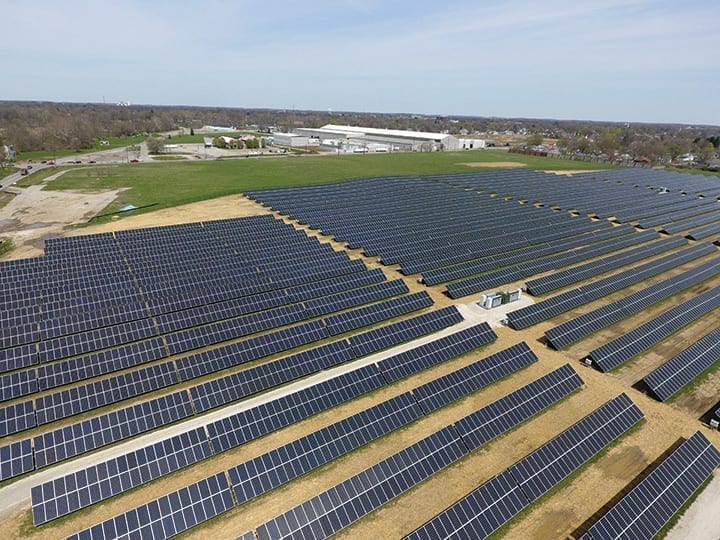 A solar array in Indiana is a model project for renewable energy development, with the site providing clean energy at what was once a U.S. Environmental Protection Agency Superfund site.

Areas of the U.S. Midwest and Northeast have been known as the Rust Belt since the 1980s, when the decline of manufacturing industries led to the shuttering of factories and other production facilities. Abandoned properties have littered the landscape, particularly in the region around the Great Lakes, which for many years was the hub of the nation’s industrial sector. States such as Ohio, Pennsylvania, Michigan, Indiana, Illinois, and Wisconsin bore the brunt of the declining iron, steel, and other industries.

The area needed to transform and diversify its economy. Much of the region’s renaissance has come as cities and states have reclaimed abandoned properties, taking brownfield sites and turning them into new businesses as part of widespread economic redevelopment. A former steel manufacturing plant in Indiana is one example, providing a model not only for an economic transformation, but also the Midwest’s move to embrace renewable energy to power its new industries.

Inovateus Solar, a solar energy provider based in South Bend, Indiana, helped redevelop a site in Kokomo, Indiana, that for years housed a manufacturing plant operated by Continental Steel Corp. The 7.2-MW Kokomo Solar 1 array is located on land where a Continental facility produced nails, rods, wire, and fencing from scrap steel, operating through the Great Depression, and providing materials for the military during World War II.

The steel plant operated for nearly 70 years. It was for a time the largest employer in Kokomo. Continental, after years of struggles, in 1985 declared bankruptcy, and then closed the plant in 1986—leaving behind a contaminated site that also impacted the area’s surface water and groundwater, polluted a stream, and left lead in the yards of nearby residents. The Environmental Protection Agency (EPA) in 1989 listed the site on the Superfund program’s National Priorities List (NPL).

Fast forward to today. Years of cleanup, part of a $40-million remediation effort led by the EPA and the Indiana Department of Environmental Management (IDEM), have turned the location into a showcase of community pride. The site includes soccer fields as part of a recreational complex; clean creeks for fishing, kayaking, and canoeing; a stormwater retention pond; wind turbines; landscaping; and road infrastructure improvements. It also features a solar array that provides power for the city’s residents, and revenue for the city’s coffers.

“It’s estimated that there are over 450,000 brownfields in the U.S.,” said Tyler Kanczuzewski, vice president of marketing and sustainability for Inovateus Solar. Kanczuzewski told POWER that solar projects are among the ways these sites can be repurposed, helping “to increase property values and the local tax base, while facilitating job growth, and many more benefits.

“As with Kokomo, cities that install solar on brownfields can be a part of the Midwest’s transition to a cleaner grid power, which will attract businesses that want to use more clean energy for operations,” he said.

Kokomo Solar 1, a $9 million project that came online in December 2016, provides a model for how brownfield sites can be reinvented. It’s a worthy recipient of a POWER Top Plant award for renewable energy.

Kokomo Solar 1 is sited on about 26 acres southwest of downtown Kokomo. The project has a 20-year power purchase agreement with Duke Energy Indiana. Inovateus built the solar farm along with Alterra Power, which was acquired by Innergex Renewable Energy in 2018. Innergex holds a 90% interest in the project, with Inovateus owning the remaining 10%.

The project includes 21,348 Suniva 335-watt DC panels, along with five Ingeteam PowerMax 1110TL inverters. The racking is a Schletter FS Uno fixed-tilt system; Schletter is a Germany-based global solar energy equipment supplier. Inovateus is responsible for Kokomo Solar’s operations and maintenance, including maintaining the brownfield cap, mowing the grass, and regularly checking the solar array for technical issues and maintenance.

Then-Kokomo Mayor Greg Goodnight in a statement after the plant came online said the city was “thrilled to partner with Alterra and Inovateus to continue the trend in Kokomo of transforming underutilized sites into assets. This project has been years in the making, and started when the area underwent a cleanup effort. From contaminated Superfund site to solar farm, the land is now producing enough clean energy to power hundreds of homes.”

The Inovateus team said there are several criteria for a potential brightfield site, the term for a brownfield location repurposed with solar power:

■ Having a community that has a high demand for energy.

■ Having a community, utility, and municipality/county “on the same page” and supportive of having the land devoted to renewable energy instead of some other purpose.

Kanczuzewski said the former Continental Steel site provided a perfect opportunity for Inovateus to embark on its first brownfield project.

“For the surrounding area, it meant repurposing and revitalizing valuable land that had been an eyesore and underutilized for decades,” he told POWER. “The city took advantage of existing infrastructure, helped transition their power generation to renewable energy, and taxpayers will benefit by receiving $36,000 a year for leasing the site for the solar project.”

The EPA and IDEM spent several years cleaning up the site that housed the steel plant after placing it on the Superfund program’s NPL in 1989. The EPA in a case study said “Improper materials handling and waste disposal practices and regular facility operations at the 183-acre site resulted in extensive contamination of soil, sediments, surface water and groundwater with volatile organic compounds (VOCs), polychlorinated biphenyls (PCBs) and several metals, including lead, arsenic, cadmium and chromium. Sampling also detected lead contamination in some nearby residential soils.” The EPA and IDEM removed and treated contaminated soils, oil, and buried drums, and also decontaminated an abandoned chemical laboratory and dredged the lagoon and creek areas.

The EPA said the $40 million cleanup was completed in 2011. The city then took control of the site, and the solar project began with a proposal to the city for the site’s redevelopment. Preliminary engineering was begun in 2014. Pre-construction activities commenced in June 2016, and the solar array was substantially completed in December 2016.

The EPA and IDEM helped the developers understand the cleanup process, to address concerns about the site’s Superfund status. The agencies laid out how Inovateus and Alterra could adapt their approach to fit with remedial constraints on the property.

Part of the site’s remedy is a 24-inch soil cap. A restrictive covenant limits operator liability as long as the cap is maintained and any work on the site is pre-approved. As part of the approval process, the developers had to ensure the solar project would not disturb a section of the soil cap with the rack’s piles. If they did, Inovateus would be required to leave the posts in the soil after decommissioning. Inovateus Solar worked with the EPA to design a fixed-tilt ballasted racking foundation (Figure 1) for the solar panels that allowed the racks to be installed above ground, minimizing their impact on the cap and avoiding permanently installing the piles at the site.

“Kokomo Solar 1 was another pioneering project for the company, the City of Kokomo, and Indiana,” said John Gulanick, director of project management for Inovateus Solar. “We all had to learn about the technical challenges of developing brightfields at a Superfund Site, complex regulations, and the national and local requirements. So, for Inovateus, Kokomo’s successful completion is an example of how we are genuinely living by our mission statement and our brand promise.”

Companies involved with the project, along with Inovateus and Alterra (now Innergex), included Indiana-based firms Heartland Solutions, which served as the engineering, procurement, and construction lead, and 1st Source Bank, which provided construction financing.

“Inovateus mission is to ‘Build a Brilliant Tomorrow,’ and our brand promise is to ‘Invest in your energy future.’ These aren’t just words,” said Kanczuzewski. “Our team is truly committed to building sustainable solar energy projects that benefit our customers and communities today and in the future.”

Gulanick said Kokomo Solar 1 is a model for other Inovateus projects, as the company continues to build solar installations benefiting residential, and commercial and industrial customers.

“Absolutely [it’s a model],” said Gulanick. “It was our first brownfield project, and we learned some valuable lessons. We now have a dedicated brownfield team that hold key OSHA [Occupational Safety and Health Administration] certifications for developing Superfund sites. Since Kokomo, we’ve been involved in the development of two more ‘brightfield’ sites—brownfields that are developed with solar farms. We also have several more potential sites that we are looking at for future development.” ■