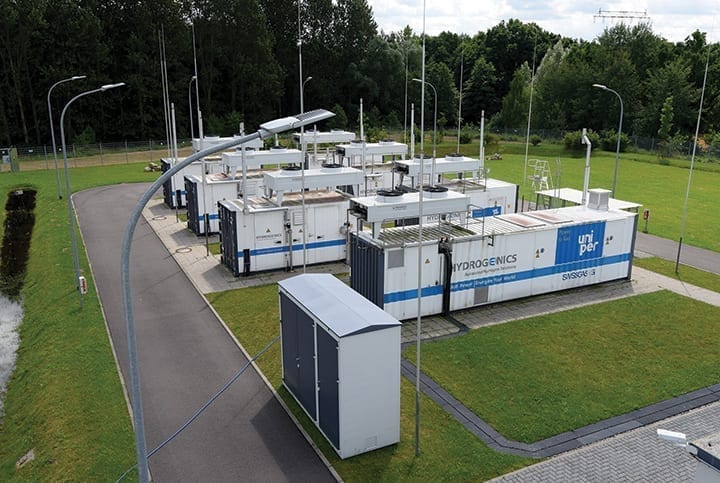 Uniper’s Falkenhagen site in Germany hosted two major pilots to produce “green” hydrogen and methane from wind power, opening up prospects for lucrative new revenue streams from decarbonized assets that could be applied to a variety of sectors, including power, heat, manufacturing, transportation, and storage.

In 2011, months after Germany’s government adopted a comprehensive legislative package laying the groundwork for Energiewende, a transition to a nuclear-free, renewables-heavy energy future by 2050, giant utility E.ON was grappling with a difficult business environment characterized by weak energy demand and steep losses from its gas wholesale business. The company had already embarked on a strategic reset to focus on its European businesses and bank heavily on a wind capacity buildout, even though it had already begun to struggle with an overabundance of intermittent power.

To address these issues, E.ON reconfigured its organizational setup and added two technology areas to its activities—energy storage and smart homes—identifying both as disruptive technologies with significant potential for changing the competitive landscape and forcing business model innovation. One concept that emerged as a result of pooling its international expertise for all storage technologies was an effort to set up its first power-to-gas (PtG) pilot project at Falkenhagen in northeastern Germany. As the company reasoned at the time, “Storage facilities, also known as thermal energy or gas storage facilities are elements designed to postpone the use of energy while networks are systems used to transport energy and to achieve the balance between surplus energy and the amounts of energy required when they’re actually needed.” PtG, essentially, “is the art of uniting these two systems,” it said.

Following a pre-planning phase in which E.ON explored several potential sites, the company settled on Falkenhagen as the most ideal site, owing to “huge grid bottlenecks” stemming from wind energy surpluses in the region. The objective, though revolutionary at the time, was straightforward: The Falkenhagen storage plant would produce up to 360 normal cubic meters per hour of hydrogen from about 2 MW of wind power through electrolysis. The hydrogen would be fed into the natural gas pipeline at about 2% by volume, at a maximum operating pressure of 55 bar (about 800 psi), effectively storing and transporting the renewable energy.

After securing a partnership with Zurich-based gas distributor Swissgas (Swissgas held 20% of the project), E.ON moved quickly in October 2011 to bring the project to fruition. Pivotal to a quick turnaround was a turnkey contract with Ontario-based hydrogen generation and fuel cell product manufacturer Hydrogenics for the supply, installation, connection, and commissioning of the novel PtG plant. The contract covered the hydrogen production facility—including a 2-MW containerized alkaline electrolyzer, as well as gas compression, master controls, and a five-year service and maintenance agreement, Hydrogenics noted.

The innovative WindGas Falkenhagen project ultimately successfully fed hydrogen sourced from 1 MW of wind power into the local ONTRAS gas grid on Aug. 28, 2013—a timeframe that spanned less than 10 months from laying the foundation stone to operation, as one official noted at the time. The PtG project was pivotal to establishing a standardization of E.ON’s new WindGas product process chain, including to procure new suppliers. One example was Hartmann Valves, which provided the 24 true metal-to-metal sealing ball valves designed to meet the excessive demands for service associated with pure hydrogen while ensuring maximum safety, because “Pure hydrogen is a challenging fluid,” as Dr. Helge Föcker, project manager of Storage Facilities & Project Management for Uniper Energy Storage GmbH, noted. But as significantly, the PtG project also helped optimize the operational concept—to essentially balance fluctuating power from wind with the changing needs of the gas feed—and it furnished the company with crucial insight into technology, costs, and permitting for the novel undertaking.

The PtG project unfolded so smoothly that E.ON moved forward in April 2013 with a second WindGas project in nearby Hamburg using a Hydrogenics 1.5-MW polymer electrolyte membrane (PEM) electrolyzer stack. That project went online in October 2015, just months after E.ON, whose conventional generation fleet continued to weigh on profits, embarked on a major split to separate its generation and distribution businesses. In January 2016, E.ON’s massive generation business was formally spun off into Uniper SE.

Uniper, which is today majority controlled by Finnish firm Fortum, has doubled down on climate neutrality initiatives, hoping to achieve them in its European generation business by 2035 and the rest of the world by 2050. That’s even though about 26% of its 34 GW fleet is coal-fired, 50% is gas-fired, and it owns several gas storage facilities with a total capacity of 7.5 billion cubic meters (m3). It told POWER in July that hydrogen will play a major future role in its asset mix. To realize its decarbonization ambitions, it plans to invest approximately €1.2 billion in green technologies and decarbonization over “the next couple of years,” it said.

Falkenhagen, notably, has remained a bedrock for Uniper’s research and development, and demonstration. In March 2016, the company embarked on a second demonstration phase at the site as part of the STORE&GO initiative. Armed with funding from the European Union’s Horizon 2020 initiative, it laid the cornerstone for a methanation plant next to the existing pure hydrogen PtG plant in July 2017, and by May 2018, it had begun first production of 57 m3/hr of synthetic natural gas (SNG)—or about 600 kWh/hr—as well as process heat for a nearby veneer plant. The plant, built in collaboration with thyssenkrupp Industrial Solutions, the German Gas and Water Industry Association (DVGW), and the Karlsruhe Institute of Technology (KIT), essentially combines 210 m3/hr of hydrogen from the PtG facility with 52.5 m3/hr of carbon dioxide sourced from a bioethanol plant in Zeitz (provided as a liquid) using the Sabatier reaction in a novel reactor designed by thyssenkrupp and KIT.

The methanation reaction is carried out in two stages. The first reaction stage occurs in a tube-type reactor whose tubes contain honeycomb-like structures coated with a catalyst, and it generates a product gas conversion rate of about 80%. After the product gas is cooled, a second polishing reactor completes the methanation reaction to achieve the SNG product quality required for the injection into the natural gas grid.

“In August 2018, it was shown that the SNG gas qualities achieved by the methanation system were extremely promising. Although there were challenges in automatically maintaining the exact CO2/H2 ratio over longer time periods, methane concentrations of more than 98% were reached and reproduced repeatedly,” said Föcker in the project’s 2019 commissioning report. Commissioning of the plant was considered finalized when the project achieved “first gas injection” into the ONTRAS grid in January 2019, he explained. By March 2019, the project was producing up to 1,400 m3 of SNG per day, comparable to about 14,500 kWh of energy, Uniper said.

Following its 24-month review, STORE&GO, too, deemed the overall Falkenhagen project a success—though it noted some limitations. “The plant reached an overall PtG efficiency of 53% based on the measurement results. The methanation unit reached an overall methanation efficiency of 85% (including heat usage and electricity demand),” it said. The relatively low overall PtG efficiency was attributed to poor performance of the existing alkaline electrolyser. As a result, STORE&GO suggested the greatest optimization potential in Falkenhagen existed in using a state-of-the-art electrolyser, which could reach a PtG efficiency of 69%. The methanation unit, meanwhile, was reportedly capable of producing high-quality SNG with a volumetric methane content greater than 99% over a wide range of loads (from 40% to 100%), it said. “Also, during load changes, the SNG quality always fulfilled the limits for injection of the gas.” 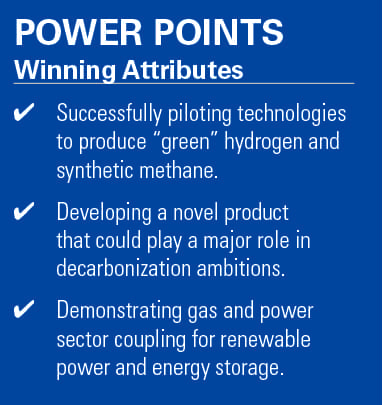 Still, for Uniper, the project’s larger success opens up new and lucrative business prospects for the use of “green” methane and hydrogen. Not only do the gases utilize excess wind and solar power, they can be used for the supply of heat and power, manufacturing, and transportation, it said. “At the same time, the unrestricted use of existing natural gas infrastructure opens up new opportunities for the transport and storage of energy generated from renewable sources. The stored energy is always available as needed, even when the sun and wind are not available to the required extent.”

Uniper now plans to follow up these projects by shaping a green hydrogen economy in Germany’s “chemical triangle,” at Reallabor Bad Lauchstädt, and then by installing hydrogen-compatible gas turbines. In tandem, notably, Uniper is exploring a concept for the use of regeneratively produced hydrogen in the refinery process in cooperation with a refinery site in Lingen. And it is also involved in “living lab” support projects “Energiepark Bad Lauchstädt” and “Norddeutsches Reallabor,” where the large-scale demonstration of sector coupling and a post-use concept for the WindGas product will be developed. ■