The 50-MW Delingha concentrated solar power tower plant located on the high-altitude Tibetan Plateau in China was developed, built, and continues to be refined by a company dedicated to solar tower technology research.

China, a country that has added more than 200 GW of solar photovoltaic capacity over the last decade, in 2016 pushed developers to jumpstart buildout of concentrated solar power (CSP) projects by officially releasing a “short list” of demonstration projects the government would help fund. But it came with a caveat: To qualify for subsidies, the “first-batch” projects—which included nine tower projects, seven parabolic trough projects, and four Fresnel projects—would need to be operational before 2019.

Among projects shortlisted was the Delingha plant, a 50-MW molten salt storage tower CSP facility proposed for construction across 800 acres of land in China’s northwestern province of Qinghai. For its developer Zhejiang Supcon Solar Technology Co., a company founded in 2010, the timeframe posed a formidable challenge.

Though Supcon Solar was one of China’s first enterprises dedicated to the research and industrialization of CSP technology, it had previously built only one other project, a 10-MW tower project at the proposed Qinghai site, which it completed in 2013 and outfitted with a molten salt system in 2016. The 10-MW Delingha tower project, it noted, was both China’s first commercial CSP plant and only the third molten salt tower CSP plant put online in the world.

And while CSP technology has evolved over 15 years from small-scale research and development projects to demonstration pilot plants to commercialization, its uptake across the world and in China has been slow, owing to costs and technology associated with economies of scale and efficiency. Also problematic was that China, determined to cultivate a burgeoning domestic CSP industry, set a 10-GW target for CSP capacity by 2020 in its 13th five-year plan, but stipulated that the majority of components would need to be sourced domestically.

As significantly, because the project was to be built on a sparsely populated plateau about 3,000 meters (m) above sea level, the 50-MW Delingha tower project was likely to pose unique challenges during construction. The region is characterized by cold temperatures, and project developers routinely consider oxygen-deficiency problems on the plateau when mapping out implementation plans.

Finally, Supcon’s plans were ambitious. It planned to install 27,135 sets of 20-square-meter (m2) heliostats around a 200-m-tall receiver. The system would also include a 7-hour molten salt storage system with 10,093 tons of molten salt. If the project met its steam parameters of 13.2 megapascals at temperatures of 540C, the designed electricity output would stand at 146 GWh/year.

According to Supcon, the plant’s construction kicked off in March 2017, and the full plant was successfully commissioned in December 2018. However, it didn’t reach full-load operation until April 2019, and Supcon officially began a 182-day (six-month) performance test period in September 2019. As of April 2020, the plant had run 158 days—the other 24 days were “too cloudy to keep running without shutdown due to equipment failure,” it said.

But on 76 of those 158 days, the plant “exceeded 100%” of the fulfillment rate on a daily basis. “The total [direct normal irradiance levels (DNI)] of the past half year was 1,055.69 kWh/m2 and the converted electricity was 74.87 GWh (67.09 GWh has been delivered to the grid) with an average fulfillment rate of 97.06%, which was the top performance among its peers,” it said. Especially notable was Supcon’s reporting of the plant’s performance for the first three months of this year, when it consistently exceeded 100% of the fulfillment rate. In the first half of February, the plant “ran continuously for 292.8 hours and generated 8.39 GWh electricity with the average achieving rate of 105.25%, which broke three records of continuous operation, electricity generation and achieving rate set in December 2019,” it said.

The plant’s achievements in the first two years of operations are notable because “it is widely accepted that tower CSP plants need three to five years [of a learning phase] to meet designed power generation due to its complexity in terms of technology itself, [a] complicated process, [and] a highly difficult operation method.” A typical engineering, procurement, and construction contract of a tower CSP project “accepts 70% to 80% fulfillment rate for the first year after completion,” it said. “According to the released operation data, up to now, no other player has accomplished the said target. The expeditious improvement of Delingha 50-MW project is a remarkable manifestation of leading technology, equipment, engineering, operation of Chinese CSP players.”

Supcon said that at the core of the plant’s good performance is technology it developed to fit the site’s conditions. For example, the molten salt receiver, which absorbs the solar energy reflected onto it by the heliostats and converts it into thermal energy via heat transfer media, must “sustain frequent and sharp temperature fluctuation and corrosive conditions.” The receiver is an external tubular/cavity tubular type made of Inconel Alloy 625 / Haynes Alloy 230 with a black Pyromark 2500 coating (Figure 1). The heliostats are also “intelligent.” Designed to be weather resistant, they feature an automatic calibration system and are self-diagnosing. Delingha, notably, also utilizes six unmanned fully automatic cleaning vehicles, which can perform in night-cleaning mode, Supcon said. Cleaning the entire mirror field takes about seven days, with the vehicles performing cleaning functions twice a day. The automated cleaners alone help slash labor costs by 1.2 million RMB ($173,000) a year, it said. 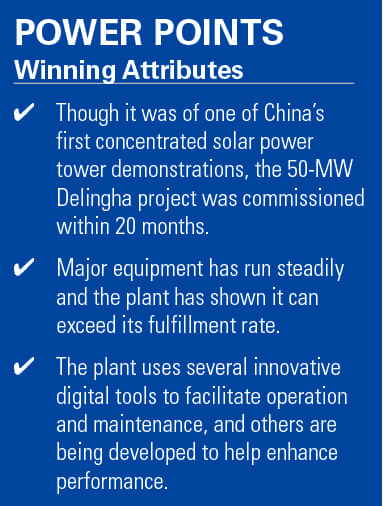 A Digital Lookout and Outlook

Supcon said its total investment in the project was 1.13 billion RMB ($162.6 million), but it isn’t done refining it. The company is now considering integrating artificial intelligence technology to reduce weather risks—particularly stemming from cloud coverage—and further enhance performance. “The plant can provide stable electricity during a short cloudy period, but sudden and unexpected clouds can impact operation and lead to system shut-down,” it explained. That imposes thermal shocks and heat fatigue on the receiver, raising safety issues and wearing down component life. A cloud forecasting system Supcon developed promises to track and accurately predict the direction of cloud movements. The solution could allow operators to “formulate corresponding operation strategies to ensure the safety and stability of the system,” it said.

Notably, Supcon also uses a “digital twin”–like platform and other digital tools to simulate and visualize the plant’s entire process, and to keep track of performance, operation, and maintenance needs. These, like much of the plant’s technology, were also developed and refined in-house, it notes. “Supcon Solar attaches great importance to technological innovation and R&D [research and development] investment, and has built a professional solar thermal power generation team of more than 100 people, of which R&D personnel account for more than 70%,” it added. The company also operates a “high-tech” R&D center, which it said is China’s “largest solar thermal technology and equipment incubation platform with the most complete functions and the most complete facilities.”

Supcon’s efforts to improve its technology, including its smart heliostats and large-scale mirror field cluster control technology, and high-temperature molten salt heat storage and exchange technology have “reached the international advanced level,” and “participated in the first international IEC [International Electrotechnical Commission] standard for tower solar thermal,” it said. That’s all part of the package of the company’s longstanding mission to provide technical research and development to produce high-quality and low-cost tower-type CSP and associated molten salt storage, it said. ■