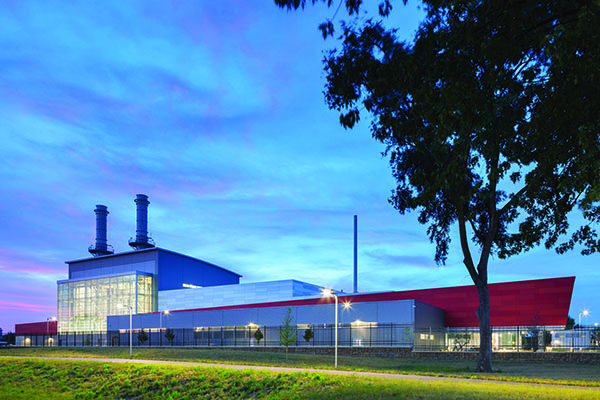 Public perceptions can make or break a project. One municipal utility found that out firsthand. When resistance grew strong against a new power plant it needed, the company rebooted and engaged with local stakeholders in a transparent decision-making process. The result was a successful new plant that truly captures the essence of the community and provides benefits beyond electricity.

All power companies perform periodic analysis of electric system demands and try to predict how things will change over time. The results are used to develop resource plans and make decisions concerning new generating plants and other assets. Often, the work is done behind the scenes and reports are reviewed in board rooms by company decision-makers. Choices may be debated internally, but for the most part, people outside of the company hierarchy are not part of the process.

The Holland Board of Public Works (HBPW)—a municipal utility that provides electric, water, wastewater, and broadband services to the City of Holland, Michigan, and the surrounding area—was going down a similar path several years ago. Its James De Young coal-fired facility had three operational units that were nearing their end-of-life. Constructed in 1953, 1960, and 1968, respectively, the units were facing significant environmental regulation changes that would have required investments in the tens of millions of dollars to keep them operational. The power was still needed, so HBPW did its due diligence and decided to pursue an 80-MW coal-fired replacement with circulating fluidized bed technology.

However, not everyone agreed with the choice. “We ended up in a four-year fight with [the Michigan Department of Environmental Quality]. We ended up with four intervention lawsuits. We ended up with a community that was split; some supported it, some did not,” Dan Nally, HBPW’s business services director at the time, said during a presentation at the 2018 ELECTRIC POWER Conference and Exhibition in Nashville, Tennessee. It seemed obvious that a reboot was needed.

So, HBPW set out on a different path. To begin, it engaged with the public. “It was very messy. It was making sausage. We had interveners at the table. We had business. We had education. We had about anybody that wanted to be there,” said Nally. Although it may not have been pretty at the start, it worked.

A 40-year community energy plan was developed through a stakeholder-driven process. That basically gave the group something to aspire to—some goals not only for energy production, but also for power utilization.

“When we started off, we did some benchmarking as a community. One of the metrics looked at was our carbon intensity,” Dave Koster, HBPW’s general manager, told POWER.

About 82% of Holland’s power, both on a kWh-sales and revenue basis, goes to commercial and industrial customers. That results in a pretty large amount of energy and carbon being distributed over a fairly small population—HBPW only has about 27,000 power customers. The net result was Holland’s carbon emissions averaged about 24 metric tons per capita. Further research found that some of the more-energy-progressive cities in the world averaged closer to 10 metric tons per capita, so Holland set a target of reaching that level by 2050.

There were a lot of other things that needed to be considered too. For example, the city has the largest snowmelt system in North America, which utilizes circulating water from its power plant as a heat source to keep downtown streets and sidewalks dry during the winter. Therefore, a thermal plant provided added value. Furthermore, the Army Corps of Engineers performed regular harbor dredging so coal boats could get to the James De Young power plant. Would that continue if coal was no longer needed for a power plant? To better understand all of the implications, a comprehensive review of costs and benefits was required, so a Sustainable Return on Investment analysis was conducted.

At the end of the day, constructing a natural gas-fired combined cycle power plant made the most sense. “The evaluation was thorough. It was transparent. It gave a very clear outcome. It really just brought everybody together in the community and brought everybody behind the effort,” Koster said.

As a result, when HBPW applied for an air permit, it was able to get one within six months. There were no public comments and no need for a public hearing.

“In this day and age of instant communication, whether it’s Snapchat, Instagram, Facebook, you name it—there is instant communication—there is instant mobilization of either support or rejection. And you have to take that into account now. And you have to engage the public early, because if you get your customer base, your owner base—we’re a municipal, our customers are our owners—if you get them engaged and have consensus—not total agreement, but consensus—the process works significantly easier,” said Nally. 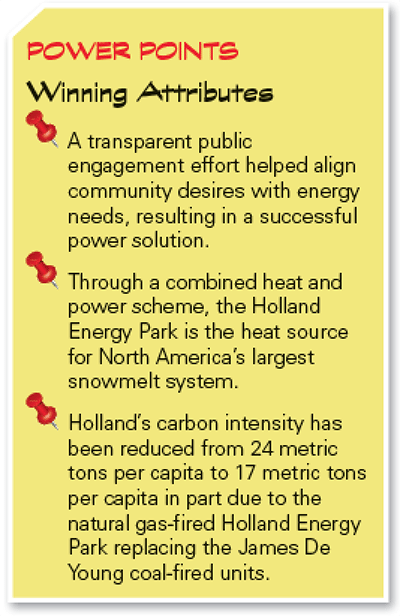 Engineered with the Public in Mind

HBPW worked with engineers, economists, and architects from HDR Inc. on a number of different aspects of the project. HDR performed preliminary feasibility studies, led the Sustainable Return on Investment process, and conducted other, more-traditional alternatives analysis. It drew insight from local stakeholders to really capture the essence of the community, and incorporated it into the architectural and site-plan design work.

“HDR was instrumental all along the way as our owner’s engineer, basically like an extension of our staff,” Koster said.

HDR took great care to create a progressive design in a natural, park-like setting complete with paths, a waterfall, and extensive natural greenery and wildflowers. As a nod to the community, the design also includes a public gallery so visitors can explore and learn about power generation.

There were a number of Holland-area businesses involved as well. “We were very careful to try to make sure that we could integrate local businesses into this process as much as possible,” said Koster. “It is nice to be able to say that over 200 businesses played a role in the actual completion of Holland Energy Park,” he added.

As previously mentioned, maintaining the functionality of Holland’s snowmelt system was an important piece of the project puzzle. The city’s snowmelt system was conceived in the late 1980s when Edgar Prince, a local businessman, visited Europe. He observed a snowmelt scheme while in Scandinavia and brought the vision for a similar system home with him.

Holland’s snowmelt system uses cross-linked polyethylene tubing (commonly known as PEX tubing) on a roughly six-inch center embedded in the streets and sidewalks (Figure 1) in the city’s shopping district. It’s designed to deliver about 90 Btus of energy per square foot. All of the heat for the system comes from the power plant’s heat-rejection cycle. Instead of sending circulating water to the cooling tower, some of the water, which exits the plant at about 95F, is diverted to the snowmelt system during the winter. An added benefit is an increased heat rate because only two of three cooling tower fans are required to run when the snowmelt system is in use.

Originally, the James De Young plant was retrofit to supply the scheme. Over the years, about 460,000 square feet of snowmelt surface was installed, but the system was effectively maxed out before Holland Energy Park was constructed. “When we said, ‘OK, you’re limited now. You cannot have any more snowmelt, but when we get this project done we can increase it fivefold,’ ” Nally said, “it was a huge driver for this project.”

“Now, we are well over 800,000 square feet of heated area, and that represents about 4.9 miles of walkable distance in the downtown area,” Koster reported. The system has revitalized the district, giving residents a thriving downtown destination, not only for shoppers, but also for walkers, joggers, and anyone else looking for a safe place to roam. In Nally’s “perfect world,” enough snowmelt surface would exist to preclude running any cooling tower fans during the winter.

Furthermore, the water returns from the snowmelt system at about 75F, which is still a very effective temperature for use in a heat pump. So, HBPW further utilizes the water to heat the administrative area of the power plant. Similarly, on the other end of town, the city is renovating its civic center and integrating the snowmelt water return line with the heating system there. When finished, it will be the primary heat source for that building too.

And the results have been very positive; Holland has cut its carbon intensity to 17 metric tons per capita, so it’s already halfway to its goal. “It’s been a good story, but it’s definitely a community story that brought us here,” Koster said. ■