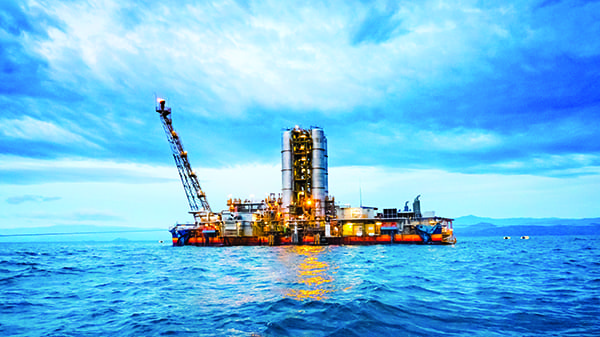 KivuWatt, a 26.2-MW power plant in Kibuye, Rwanda, was conceived to help reduce risk of an overpressure gas outburst at Lake Kivu. The first-of-its-kind integrated methane gas extraction and production facility has since become a critical regional producer of power.

Straddled between two volcanic regions in the western branch of the Great Rift Valley, over the border between Rwanda and the Democratic Republic of Congo (DRC), is a 1,040-square-mile body of shimmering water with jagged shores, whose picturesque surroundings belie the fact that it is known as a “killer lake.”

That’s because Lake Kivu, part of the East African great lakes, is a meromictic lake whose depths extend to 485 meters (m). Compared to shallow lakes, where wind-driven currents keep the water mixed all year round, in meromictic lakes, currents are no longer able to overcome the density differences that develop between the top and bottom waters, so they become stratified.

Lake Kivu’s bottom-most waters absorb high concentrations of carbon dioxide (CO2) from magma-heated springs deep underground, and microbes convert much of the CO2 to methane. These dissolved gases are held in solution by pressures in the depths of the lake: Studies suggest that as much as 250–300 cubic kilometers (km) of CO2 and 50–55 cubic km of methane is trapped in the lake’s deep waters. However, the gases can emerge if zones of high concentration move toward the surface, a process known as a limnic eruption, or “overturn.” Because the region is regularly subject to large-magnitude seismic events and volcanic discharges—and considering that methane has a high partial pressure—Lake Kivu is known to experience violent overturns. Geologists believe they occur at Lake Kivu about every 1,000 years—and that the lake is ripe for another.

The concern is founded on the recent, sudden degassing from two much smaller volcanic lakes in Cameroon. In August 1984, a CO2 burst at Lake Monoun, thought to have been caused by a landslide, asphyxiated 37 people. In August 1986, a much more catastrophic event at Lake Nyos—a gas cloud that erupted in a giant water fountain of more than 80 m in height—resulted in 1,746 casualties as well as the loss of more than 8,000 livestock, and prompted an international response, which included a conference organized by the United Nations Educational, Scientific, and Cultural Organization (UNESCO) in early 1987.

Scientists note that Lake Kivu, whose waters and dissolved gases collect along the vertical profiles of five basins, is 2,000 times larger than Lake Nyos, but that Lake Kivu is far from “critical” saturation of CO2 and methane compared to the funnel-shaped Lake Nyos, which was oversaturated when it erupted. However, concerns about an overturn of Lake Kivu ramped up after January 2002, when the Nyiragongo volcano—one of the most active volcanoes on Earth—sent a voluminous lava stream into the lake from the northern Congolese shore. That event fueled concerns that an increase of dissolved gases (particularly methane) could prompt a limnic event within 80 to 200 years, posing a treacherous hazard to its riparian population of about 3.5 million. 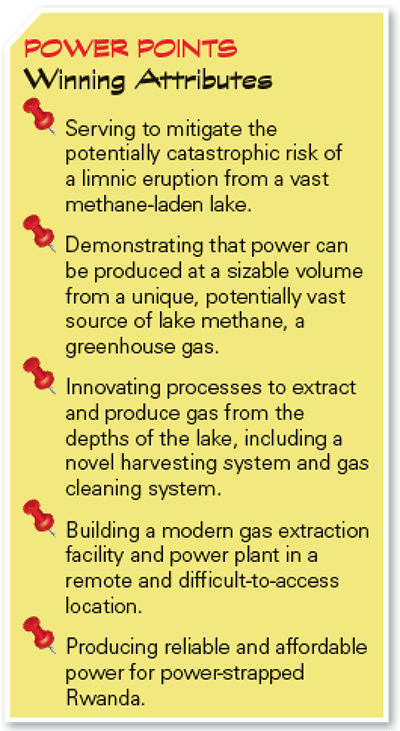 The governments in Rwanda and the DRC, backed by international efforts, moved into high gear to reduce risk of an overpressure gas outburst in the years that followed that event. To also mitigate a power crisis worsened by high technical losses within its dilapidated system, Rwanda expedited development of Lake Kivu’s methane reserves with private sector participation. Its leaders signed a memorandum of understanding with Scotland-registered Dane Associates in July 2002 for a proposed 35-MW project (and eventually, a concession to supply up to 200 MW) that would be developed on a build-own-operate basis by Kibuye Power 1 (KP1) Ltd. (a 70-30 joint venture between Dane and the Rwandan government). Finnish power equipment maker Wärtsilä Corp. was to supply that project’s equipment, and operations and maintenance. However, in 2007, even as a 3.6-MW pilot had already begun producing power on the lake’s shores, the government sought a “divorce” from Dane, alleging that the company failed to provide sufficient details of the then-$3 million “pre-project costs.”

In 2009, Rwanda turned instead to 2005-founded New York-based (now listed in London) ContourGlobal, signing a $325 million deal for a two-phase plan comprising integrated methane gas extraction and production facilities, and an associated power plant with capacities reaching 100 MW. The first $142 million (the final total was $220 million) phase of the project, “KivuWatt,” entailed a 750-ton barge that would house a gas extraction facility, and a 26-MW power plant comprising three 20-cylinder 34SG gas-powered engine sets supplied by Wärtsilä. The project was slated to be operational in 2012.

The first feat that had to be overcome was assessing technical feasibility of the project, which ContourGlobal modeled and tested “based on the most advanced computer simulation software and existing data from scientific studies and observations from [the] KP1 pilot plant,” the company told POWER in September.

It then embarked on construction in August 2011. As it built the power plant, it submerged the floating sweet gas pipeline and built the floating production platform, a task that entailed engineering, procuring, installing, and finally, commissioning gas processing equipment and the platform mooring system. “In addition, the whole supporting infrastructure including port facilities had to be designed and built,” the company noted.

The first-of-its-kind project was predictably plagued with challenges. “Apart from [the] power plant, all other structures and facilities were novel applications with no prior experience anywhere else,” it said. “No supporting infrastructure, machine, or human resources [were] locally available.” Added to that, the distance from the nearest port was more than 2,000 km.

A Sweet and Sour Process

The project’s most significant feature is perhaps its gas extraction facility, which began operations in December 2015. Located 13.5 km from shore, the facility is tethered to the bottom of the lake. It extracts methane through an auto-syphon process that is initiated when a pump draws gas-laden water from the lower resource zone of the lake (below 355 m) through large gas extraction riser pipes, until it reaches horizontally mounted gas separators, which are located 20 m beneath the platform.

As the water is transported through the riser pipes, the gas in the water—which is initially methane (CH4), then CO2 and hydrogen sulfide—bubbles upward from depths of about 240 m. The “degassed” water is then re-injected into the lake, where it safely re-stratifies with the CO2-laden waters. The separated gas—“sour gas”—is then piped through a series of wash towers along with wash water, which is extracted from the lake surface (at a depth of about 40 m). The gas flows upward and the wash water downward through a series of trays in a process designed to dissolve the unwanted CO2 and hydrogen sulfide into the wash water. The result is a sweetened gas of about 90% CH4, with the remainder comprised of CO2 and nitrogen. The gas is then compressed, dried, and transported to the power plant.

“The gas volume estimated to be available for the project was only theoretical as there was no precedent for this type of project,” ContourGlobal said. The company noted that the harvesting system and gas cleaning system are “novel and unique,” and the delivery system to shore, which uses polyethylene submerged floating pipework, is also “innovative.”

Leveraging a Threat for Power

Wärtsilä, which designed, supplied, and fine-tuned the 34SG engines at the power plant, which came online in December 2015, said the engines are optimized for a lower heating value than normal natural gas (Figure 1). “This has helped scale down the size of the extracting barge and reduce the costs of producing electricity,” it said.

The company noted that it had to rely purely on computer simulations and “a lot of guesswork” at the design stage because little technical knowledge existed about separating gas from water at Lake Kivu. Corrosion was also an issue, as the lake’s water is acidic. Another challenge was ensuring the process didn’t upset the biological balance in the lake.

When KivuWatt officially began operations—producing reliable and affordable power as envisioned for Rwanda—it was ultimately three years behind schedule and nearly $72 million over budget. But despite its lengthy development and ensuing difficulties, within the three years that KivuWatt has been in operation, the experience ContourGlobal gained has paid off substantially. “KivuWatt has learnt and gathered experience in [gas] extraction and is able to increase the capacity of the actual gas extraction facility from 26.2 MW to 34 MW with small modifications,” the company said.

KivuWatt-Rwanda from ContourGlobal on Vimeo.

For now, at least, KivuWatt appears to have opened the waters for more projects. In August 2018, independent power producer Symbion Power, which has secured the rights to deliver two projects on Lake Kivu, announced it contracted Clarke Energy as the preferred bidder for Kivu 56, a 56-MW project, and an expansion of the 3.6-MW KP1 pilot to 25 MW. Clarke will deliver GE’s J620 3-MW Jenbacher gas engines to the projects. ■