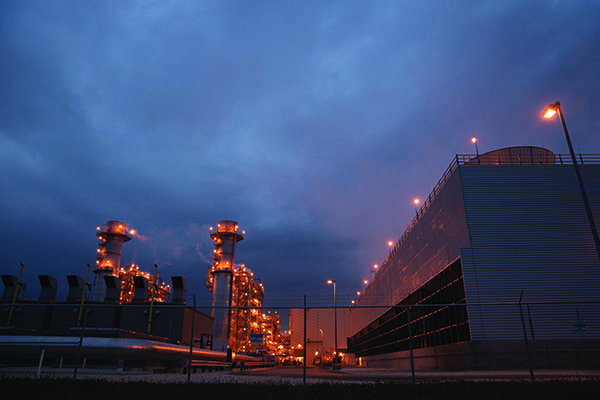 The cost of fuel is one of the most important factors affecting power plant profitability, but flexibility and efficiency are also vitally important to success. One impressive new plant in Ohio—the Lordstown Energy Center—is positioned to profit from inexpensive gas while utilizing proven technology to economically produce reliable power. The project is a notable POWER Top Plant award winner.

The power industry has changed dramatically over the past decade. One of the driving forces behind the transformation has been the growth of shale gas production. Shale gas is natural gas—primarily methane—found in shale formations, some of which were formed during the Devonian and Ordovician periods of Earth’s history.

According to the U.S. Department of Energy, the shales were deposited as fine silt and clay particles at the bottom of relatively enclosed bodies of water more than 300 million years ago. At roughly the same time, primitive plants were forming forests on land and the first amphibians were beginning to appear. Some of the methane that formed from the organic matter buried with the sediments escaped into sandy rock layers adjacent to the shales, forming conventional accumulations of natural gas, which are relatively easy to extract. But some of it remained locked in the tight, low-permeability shale layers, becoming shale gas.

Two of the more prolific natural gas-producing shale formations in the U.S. are the Marcellus and Utica plays. Both are in the Appalachian Basin and extend from the state of New York in the north to northeastern Kentucky and Tennessee in the south. Marcellus’ footprint covers about 95,000 square miles with a prospective area of about 72,000 square miles, while Utica’s footprint is even larger. However, Utica Shale can be as much as 7,000 feet below Marcellus Shale, so it is far less developed. 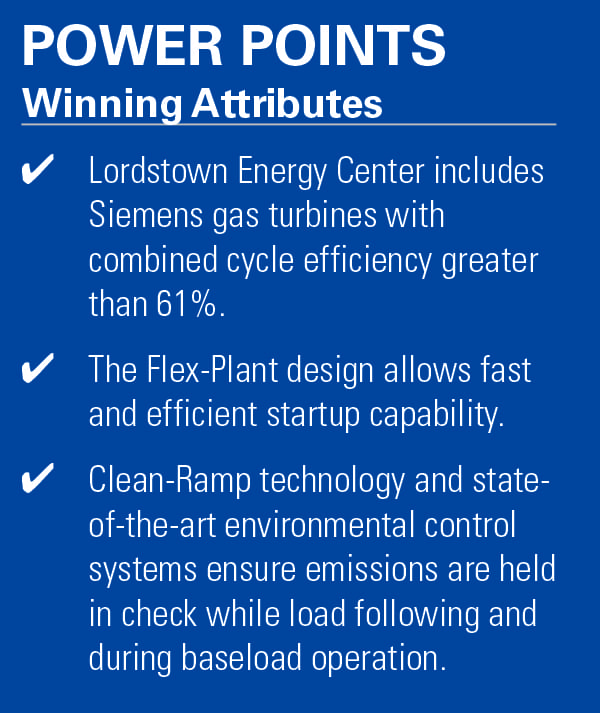 In its most-recent estimate of proved natural gas reserves, which are those volumes of shale gas that geological and engineering data demonstrate with reasonable certainty to be recoverable in future years from known reservoirs under existing economic and operating conditions, the U.S. Energy Information Administration (EIA) estimated the Marcellus play had 123.8 trillion cubic feet (Tcf) of shale gas in Pennsylvania and West Virginia alone. Utica and the underlying Point Pleasant formations were estimated to have 26.5 Tcf of proved reserves in Ohio. The two plays account for nearly 50% of all shale gas proved reserves reported by the EIA.

A Team of Experts

With all that relatively inexpensive fuel available, it’s not surprising to see new natural gas-fired power plants springing up in the Marcellus and Utica regions. One impressive power station that began commercial operation in October 2018 is the Lordstown Energy Center (LEC), located in Lordstown, Ohio. It receives its fuel via the Dominion East Ohio gas system, which allows it to produce power cheaper than many other generators. With two combined cycle units, LEC is a 940-MW electric generating facility. It provides safe, clean, efficient, and reliable power to approximately 850,000 homes and businesses served by the PJM Interconnection regional transmission network.

The plant’s operating company, known as Clean Energy Future—Lordstown LLC, is majority owned by a subsidiary of Macquarie Infrastructure Partners III and its co-investors, with Siemens Financial Services and Clean Energy Future LLC also holding stakes. The plant is operated by Worley, a global provider of professional project and asset services, which staffs the facility with 22 on-site employees.

Siemens was responsible for building the entire plant under a fully wrapped engineering, procurement, and construction (EPC) contract. Siemens utilized several subcontractors on the project, including Kokosing Industrial Inc.—the general contractor for the job.

According to LEC ownership, the project peaked at approximately 900 union labor hands. “Under the project labor agreement, the Western Reserve Building Trades did a great job supporting the project with skilled labor,” Jason Pillai, general manager for LEC, told POWER. “When labor was peaking, some trades were tight, but we worked through this with the unions.”

The Siemens H-class gas turbine has been on the market for nearly a decade. In February, Siemens announced that its H-class had achieved a significant milestone by exceeding 1,000,000 fired hours of commercial operation. With 70 turbines in operation on four continents and almost 100 machines sold, the SGT-8000H is the market leader in its class and delivers impressive performance, with improvements in efficiency to more than 61% in combined cycle operation. With ongoing updates and technology downloaded from its HL-class gas turbines, Siemens plans to continue enhancing its H-class fleet.

The SGT-8000H fleet size grew significantly as a result of the largest single order in Siemens’ history. That was placed by the Egyptian Electricity Holding Co. in 2015, when it ordered 24 H-class gas turbines. The turbines were installed in combined cycle power plants in Egypt at the Beni Suef, Burullus, and New Capital sites in just 27 months. Siemens also served as the EPC contractor on those projects, which were recognized this year as POWER’s Plant of the Year award winner (see “Egypt Megaproject: An Expedited Power Transformation” in the July issue).

“As far as [LEC’s] technology goes, there isn’t any first-of-a-kind technology on the project, but there is still cutting-edge technology such as Clean-Ramp, Steam Assist, the DASH system, and Co-Start feature,” Chris Mieckowski, director of Global Solutions Marketing with Siemens Gas and Power, told POWER.

Steam Assist enables a Flex-Plant to fast-start after an overnight shutdown, while reducing or eliminating the use of the gas-fired auxiliary boiler. The use of Steam Assist reduces fuel costs and emissions generated by the plant.

The DASH system allows for fast response from a duct-fired plant—as quickly as an unfired plant—to changing load demands (constant/fluctuating/peaking). This enables duct-fired capacity to participate in ancillary service markets.

Meanwhile, the Co-Start feature provides fast and efficient plant startup with reduced fuel costs and increases revenue generation by enabling the plant to make more power in a shorter time. This technology lowers greenhouse gas startup emissions up to 90% versus conventional startup. With Co-Start, operators get fast-moving intermediate generation and the capability of a quick-start peaker in addition to high-efficiency baseload operation. With Co-Start, Mieckowski said LEC could complete a startup in about 17.5 minutes after a 7.5-hour shutdown.

Coordinating a Safe and Efficient Project

The biggest challenge faced by the construction team resulted from space restrictions. “We had a very compact site that required a high level of coordination, planning, and flexibility of all parties,” Norman Kettenbauer, construction director for LEC, said. Still, the safety metrics for the project were laudable. Through substantial completion, the lost-time injury frequency rate was 0.11, and the total recordable-accident frequency rate was 0.64.

“There is no ‘one thing’ that results in a strong safety culture. It is a constant focus every hour of every day. It is all about asking the right questions, listening to other ideas, and doing everything possible to prevent complacency,” Drew Schneider, plant manager for LEC, explained.

The community was very supportive of the project. The Village of Lordstown Mayor’s Office, police, and fire departments were all particularly helpful. LEC ownership, led by Kettenbauer, held quarterly luncheons with the village leaders to review the status of the project and explain what residents could expect regarding changes in traffic patterns, staffing, noise, and other activities. The fire department was also brought onsite to familiarize firefighters with the site as conditions changed.

LEC provides a number of benefits for the local community. The facility is expected to provide more than $1 million annually to Lordstown schools over the next 15 years. Furthermore, employees have been active with the local United Way and in area school district activities. As a major asset to the village of about 3,240 residents, and a reliable and efficient power producer for the region, LEC is deserving of recognition as a POWER Top Plant. ■