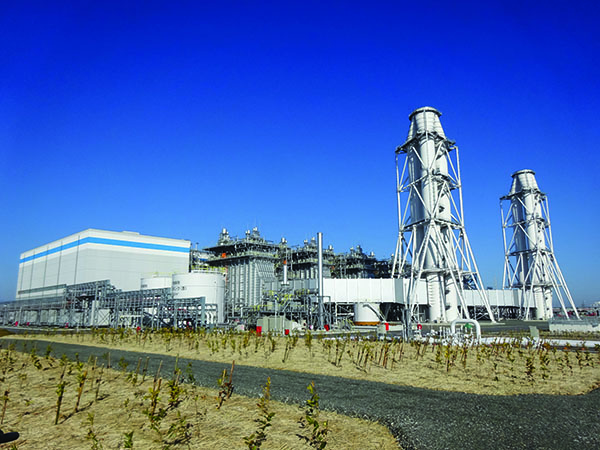 The Nishi Nagoya power plant in Japan is more than just the showcase of a successful fuel-conversion project. It’s the holder of a world record, thanks to a GE Power gas turbine that again has set the global standard for performance. Photo Courtesy: Chubu Electric Power

The Nishi Nagoya project in Japan began as the conversion of a large oil-fired power plant into a natural gas combined cycle facility. The original facility came online in 1970, and more than 40 years later the operators from Chubu Electric Power knew they needed to reduce carbon dioxide emissions along with the plant’s fuel consumption.

The project has accomplished far more. The existing 1,190-MW plant today has increased output of 2,376 MW. It has reduced CO2 emissions by about 1.4 million tons annually.

It’s also the proud holder of a world record and stands as the world’s most-efficient combined cycle power plant in operation today, having achieved 63.08% efficiency thanks to the performance of its 7HA gas turbine from GE Power.

A Top Plant award from POWER is the latest accolade for a plant that has helped Chubu enhance its competitive profile and financial profitability, even during a period of flat or falling demand for electricity across Japan. The plant’s efficiency allows for a reduction in its consumption of liquefied natural gas (LNG) for fuel. It has helped the local community by reducing the cost of electricity and cutting plant emissions, along with providing reliable power for a large part of central Japan.

A team from GE Power provided email responses to questions from POWER detailing the plant’s importance for the company and Chubu.

“This is GE’s first commercial order of 60-Hz 7HA technology, and its performance demonstrates the HA’s high level of efficiency,” the team said. “This is a very important project for GE, and we have a highly valued relationship with our customers and partners in Japan extending for decades.”

Sustaining a Record of Success

The success at Nishi Nagoya, located in the Ama District of the Aichi Prefecture in central Japan, comes on the heels of an earlier world record for efficiency for a GE HA gas turbine. The first mark was achieved with delivery of 62.22% efficiency in the 50-Hz segment at EDF’s Bouchain plant in France, which began commercial operation in 2016 and was the first plant to use a GE 9HA combustion turbine. Bouchain, a 605-MW unit that was a POWER Top Plant in 2017, comprises the first-of-its-kind GE 9HA.01 gas turbine, a D650 steam turbine, and a W86 generator working in tandem.

GE noted that its HA gas turbine “has been recognized for powering the world’s most-efficient power plants in both the 50-Hz and 60-Hz energy segments.” The 50-Hz frequency is used in much of the world, including Europe, while the U.S. and Japan are the largest users of the 60-Hz frequency.

Japan’s power generation has evolved in recent years after many of the country’s nuclear reactors were taken offline after the Fukushima disaster in 2011. As the nuclear program has been overhauled, other energy resources have undergone their own periods of change.

Said GE Power: “For context, Japan is going through a three-step energy reform to introduce more competition in Japan. Japan’s energy industry has been dominated by 10 utilities generating approximately 80% of the country’s electricity and these utilities were unable to transmit electricity beyond their designated region. To create more competition, the government established an independent institution to promote and coordinate wide-area operations to supply energy in April 2015.

“The second step was completed last April when the retail energy market was fully liberalized, allowing non-utilities to enter the market and residential power customers to choose their provider for the first time. The third step is the legal unbundling of the transmission and distribution sector, which is planned for April 2020; by this time utilities will be required to separate their transmission, distribution, and retail businesses. With more competition, traditional utility customers like Chubu are looking for more energy-efficient solutions and GE’s HA technology helps meet this need.”

Out with the Oil, In with the New

The Nishi Nagoya project was to convert an existing oil-fired, 1,190-MW plant that had operated for more than 40 years. The plant had four units and used crude oil and heavy oil as fuel. These four units were decommissioned in 2013.

The project to build a high-efficiency combined cycle plant was first discussed in 2010. Chubu signed an engineering, procurement, and construction (EPC) contract with Toshiba Energy Systems and Solutions in June 2012, with GE as one of the subcontractors. The project’s construction began in January 2014, with construction of the power plant beginning in November of that year. The commercial operation date (COD) of the first block was in September 2017. The COD of the second block was March 2018, the same month that Guinness World Records recognized Block 1 as the world’s most-efficient combined cycle plant.

In March, during the announcement of the Guinness award, Russell Stokes, president and CEO of GE Power, said of Nishi Nagoya: “We’re very proud to make history once again and to partner with Chubu and Toshiba to bring GE’s industry-leading HA turbine to Japan. Our HA technology enables the power plant of the future, delivering unprecedented levels of efficiency and reliability that can help countries everywhere meet today’s power demands and reach more aggressive emissions goals.” 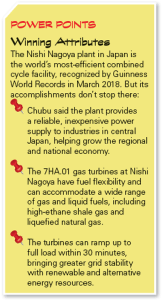 Central Japan, the area served by the Nishi Nagoya plant, is home to several major Japanese manufacturing companies that drive the country’s economy. Chubu has said that with more-efficient power generation, it can provide a reliable, inexpensive power supply to these industries, which makes them more competitive and grows Japan’s economy. If not powering industrial applications, Nishi Nagoya can supply electricity to 5.4 million households.

Satoru Katsuno, president and director of Chubu Electric Power, discussed the record efficiency achievement after it was announced in March. “To support manufacturing by providing a stable and inexpensive power supply in Chubu, Japan’s central region, we have been making unremitting efforts to construct power generation facilities that achieve the world’s highest levels of output and efficiency,” Katsuno said. “We believe that our constant quest for innovation led to this [world record] achievement.”

Satoshi Tsunakawa, then-president and CEO of Toshiba Corp., now president and COO, also acknowledged the world record for efficiency. “We are very proud to have contributed to this historic achievement,” he said in a news release. “As EPC contractor for the plant, we worked really closely with Chubu Electric Power toward reaching this goal, and to deliver excellent technologies and systems that pushed the plant’s efficiency beyond 63%. This success is an inspiration, and Toshiba ESS will continue redoubled efforts to realize a low-carbon society and stable electricity supply.”

The 7HA.01 gas turbines at Nishi Nagoya have fuel flexibility and can accommodate a wide range of gas and liquid fuels, including high-ethane shale gas and LNG. The 7HA turbine can ramp up to full load in less than 30 minutes, which allows for greater grid stability with renewable and alternative energy sources. Chubu said those efficiency gains help reduce emissions and fuel costs.

Two power plants in Texas—Exelon’s Wolf Hollow and Colorado Bend facilities—also use 7HA turbine technology, and GE said it will bring more than 30 HA units into commercial operation this year.

GE’s HA turbines for North American and other Western Hemisphere markets are made at a facility in Greenville, South Carolina. Turbines for Europe, Africa, and most of Asia are produced in Belfort, France. Though turbine manufacturers have struggled recently with fewer orders as the use of renewable energy resources grows, many industry analysts say continued efficiency improvements in turbines such as those at Nishi Nagoya mean there will continue to be a market.

The words of Bill Horie, GE Power’s country executive in Japan, may say it best. Said Horie last year as Block 1 at Nishi Nagoya entered commercial operations: “GE’s HA technology underscores our company’s commitment to powering the world with more efficient energy solutions, and we are proud to achieve this milestone with Chubu and Toshiba. The 7HA is a prime example of the important role GE can play in Asia’s energy future, and the HA’s proven operational experience in the field will provide more reliable, efficient and flexible power for years to come.” ■