With license extensions for its three units in hand, Duke Energy’s Oconee Nuclear Station began a digital controls upgrade program in 2006, and in January 2010, AREVA became the first supplier to receive Nuclear Regulatory Commission approval for a safety-related digital instrumentation and controls system. That set the stage for Oconee to become the first U.S. nuclear plant to complete digital upgrades to a commercial reactor protection system. 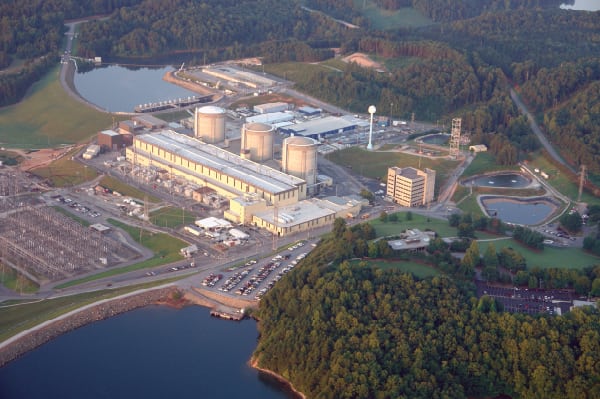 [Ed. note: Updates made 11/2/12 and 11/8/12 to this web version of the story to clarify statements regarding the scope of the digital controls upgrade.

POWER has written about partial digital upgrades at Oconee and other nuclear plants in the past. The award this year was for a specific safety-related system digital upgrade. Derek Halverson, a Nuclear Regulatory Commission spokesman, told POWER on Nov. 8 that what Oconee installed was “the first complete integrated digital reactor protection and engineered safeguards system of any U.S. commercial nuclear power plant.” Halverson further clarified: “Many NRC-licensed plants have at least partially upgraded their control systems, both safety related and non-safety related, from analog to digital technology. For example, many plants have installed digital technology in at least a small portion of their safety related I&C systems, even if only to support operator indications. However, there are still safety-related I&C systems at Oconee and the other NRC licensed nuclear power plants that remain analog.”]

The Oconee Nuclear Station near Seneca, S.C., first came online with Unit 1 in 1973; Units 2 and 3 began operation in 1974. With a total capacity over 2,500 MW, the station—now one of the oldest in the country—has been a key element of the area grid for almost four decades, having generated more than 500 million MWh over its lifetime.

Oconee’s three units have a common Babcock & Wilcox pressurized water reactor design, each with a capacity of 885 MW. In 2000, the station received a license extension from the U.S. Nuclear Regulatory Commission (NRC) that permitted operation through 2034. That, Duke recognized, meant significant replacements and upgrades would be required to continue operating Oconee in a reliable, cost-efficient manner well into the 21st century.

Like every other nuclear plant built in the U.S., the station’s original protection systems were analog. However, over Oconee’s lifetime, the original equipment manufacturers for the control and protection systems began to discontinue support for their equipment. One way or another, Duke needed to replace it. But rather than simply upgrade with newer analog systems, Duke made the decision to give Oconee the first complete integrated digital reactor protection and engineered safeguards system of any U.S. commercial nuclear power plant.

Digital instrumentation and control (I&C) systems in fossil and renewable plants are nothing new and are now largely standard because of the clear benefits they offer over analog. However, regulatory concerns over potential safety issues have slowed deployment of digital controls in nuclear plants, particularly in safety-related systems.

In 2006, as part of the overall refurbishment program, Oconee’s staff began their effort to upgrade many of the plant’s analog I&C systems. The projects were selected based on their impact on plant operation.

Duke chose AREVA as the vendor for the new I&C systems based on the success of its Teleperm XS technology. The AREVA Teleperm system was designed for use in the new AREVA EPR plants that are currently under NRC design review, but it can also be used for upgrades at existing plants.

One of the projects involved the digital upgrade of the reactor protection system (RPS) and engineering safeguards (ES) system. The digital upgrades to nonsafety systems such as the integrated control system could be performed without modifying the plant’s existing operating license, but the safety-related RPS/ES digital upgrade project required NRC review and approval. After several years of planning and design, the NRC finally gave Duke the go-ahead in January 2010, allowing the upgrade project to move forward. With that decision, AREVA also became the first supplier to receive NRC approval for a safety-related digital I&C system. The upgrades to Unit 1 were scheduled for a refueling outage in April-May 2011.

Upgrading the RPS and ES systems was not a job to undertake lightly. The RPS is the key system controlling reactor operation and safety, as it monitors inputs related to reactor core operation (core power and coolant pressure, flow, and temperature, among other parameters), and is the system that will shut down the reactor (by automatically tripping the control rods) any time safe values or combinations of values are exceeded. 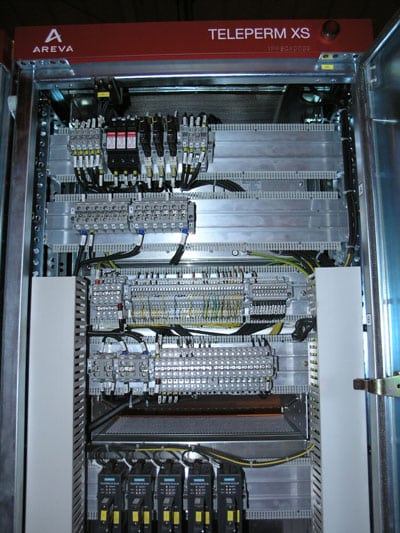 In addition to addressing the obsolescence of the existing analog equipment, the digital upgrades incorporated some significant enhancements into the design. These included an additional set of ES channels, which created a fully redundant ES system. Having two complete ES systems offers substantial operational and maintenance benefits that allow staff to perform testing and maintenance without taking reactor safety features offline.

The systems are also “smart” in the sense that they’re capable of recognizing when a sensor has failed or is malfunctioning. This means that a dodgy sensor won’t cause the reactor to trip when conditions are actually okay. That offers significant long-term bonuses for reliability and capacity factor and, thus, revenue.

Another major benefit of the digital upgrade project was the addition of online monitoring and diagnostic capabilities, which allow for the elimination of periodic operator checks of system performance. This eliminated the need for functional testing of the ES system, which had to be performed online at each unit. Elimination of online functional testing greatly reduced the potential for inadvertent actuation of the engineered safety features, something that had occurred at Oconee in the past.

In addition, reducing the need for manual online testing meant reduced expenses and man-hours that had previously been necessary with the analog controls. Oconee was thus able to eliminate quarterly functional testing and daily channel checks.

The changes brought about by the digital upgrades meant that the NRC needed to develop new regulatory guidance for safety-related digital applications, as the new features and capabilities of the digital signals were not fully addressed by existing regulations. NRC officials worked extensively with Duke and AREVA staff to update their regulatory oversight during the project review. The project team ultimately had to respond to more than 100 Requests for Additional Information from the NRC, and a total of more than 38,000 pages of documents were provided to the NRC for review.

As with any digital system, cybersecurity was a key issue. During the design and approval process, Duke and AREVA conducted thorough reviews of the system’s ability to mitigate communications faults between various subsystems and its ability to maintain reliability of the safety-related functions. The new system includes physical and software barriers as well as defense-in-depth and diversity methods to provide cybersecurity for critical assets.

The upgrades were completed and brought online in June, and Unit 1 has since been operating with no major issues. The project was completed without a single lost-time accident or near miss. The success of the upgrade led the Nuclear Energy Institute (NEI) to give Oconee its 2012 Best of the Best Top Industry Practice award in May.

Duke has set out to share the lessons learned by Oconee during the licensing process with the rest of the industry in seminars, conferences, and interim staff guide working groups. These have been used to provide enhancements to the NRC licensing process for digital upgrades.

“As the first plant in the nation to add this new equipment, Oconee is demonstrating its commitment to continuous improvement as new systems and technologies become available,” said Oconee VP Preston Gillespie. “It’s enhancements like these that have us well positioned to operate a safe, reliable, efficient plant through the duration of our license extension.”

Details matter when you’re a trailblazer in the nuclear sector. “When I look back over the decisions of leaders that I worked for 10 years ago, who had the vision of what it would take to install a safety-related digital system, I stand very much in respect of what those leaders did,” Gillespie said. “They knew it would be hard; they knew the cost would be great; they knew they had to find the right partner; they knew they had to get it through the licensing process. All of this, they knew, would result in reliable and safe operation of the plant. Because of that vision, the trail is now blazed for the rest of the industry to take advantage of the fruits of their labor.”

Upgrades to the I&C systems on Unit 3 were carried out earlier this year and are planned for Unit 2 during a refueling outage in 2013.

Innovation at Oconee has not been limited to the I&C upgrade. The NEI also honored the plant for its development, with Babcock & Wilcox, of a robotic steam generator tube inspection system. The single-pass, fully automated system incorporates a robot and analytical tools that enhance safety and reduce the time and labor needed to perform steam generator inspections. The data is so accurate that it eliminated the need for a second, confirmatory analysis of the inspection results.

“These two awards recognize the achievements of the project teams at Oconee and our corporate headquarters. Engineers, technicians and others worked diligently to install and ensure these systems functioned as designed,” said Gillespie.

A video about the digital upgrades can be viewed on the Duke Energy website at http://bit.ly/PHG4vh.