A week before the Preakness and two weeks after the Kentucky Derby, it was an atomic horse race in Baltimore. Reactor vendors trotted out their technologies at the ELECTRIC POWER Conference & Exhibition in sessions that filled the nuclear track’s 96-seat room at the Baltimore Convention Center.

The reactor makers were also soliciting help from the audience for offers of supply chain items (in short supply) and engineering talent (in even shorter supply). It was deal-making time extraordinaire.

The favorites in the race for new U.S. reactors were all the usual suspects. The Westinghouse AP1000 pressurized water reactor (a scale-up from the already-approved AP600, which attracted no buyers), with a design certificate in hand from the U.S. Nuclear Regulatory Commission (NRC), is in the starting gate against two substantial rivals.

The selling point of the Westinghouse and GE reactors is that they are departures from past designs. The new horses on the track all rely on passive features—gravity and thermal circulation—to simplify their designs and reduce pumps and valves and piping in both normal and emergency cooling nuclear plant environments.

Then there is AREVA’s evolutionary power reactor (EPR), a pressurized water reactor (PWR) based on well-understood Framatome technology. Plants using the EPR (one currently over budget and behind schedule) are under construction in Finland, and another is just beginning construction in France. This plant design, argue its proponents, is the real deal; it’s under construction today. There are no surprises. They hope.

The competing technologies, argue the AREVA advocates, are paper reactors; there’s little practical knowledge of how they will work. The AREVA plant, which has yet to win U.S. design certification, is, the sales folk aver, simply an evolutionary extension of previous PWR designs. It is the peanut butter-and-jelly reactor. Fewer pumps and pipes, but still recognizable.

Westinghouse and GE are fervent in their marketing rebuttals. Their designs, argue GE and Westinghouse, are far superior. They aren’t evolutionary, but revolutionary, and a whole lot better. They employ features known to improve safety and cut costs over conventional systems, using gravity and natural, thermal circulation. Engineered safety features are out; passive reactions to problems are in.

The next new thing

The dark horse, charging from the rear, is the pebble bed modular reactor. This is a “Generation IV” machine in the industry’s nomenclature, meaning that it’s even further from reality than the new class of reactors (see “Developing the next generation of reactors” in POWER, April 2008).

But it is promising, based as it is on high-temperature helium-cooled technology that was quite successful in Julich, West Germany, in the 1980s (at a very small scale). Unfortunately, around the same time, the technology failed at a commercial scale (300 MW) in the U.S., at the Fort St. Vrain plant in Colorado. Investors are putting hundreds of millions of dollars into a test of a 400-MW thermal reactor in South Africa. Let’s watch this experiment.

NRC: Running as fast as it can

While the vendors were running a marketing horse race, regulators and customers in Baltimore were describing a similar contest in the world of regulation.

The NRC’s Patrick Madden—a key policy official in the new licensing regime—launched the horse race metaphor. He said what’s now confronting the industry and regulators is the equivalent of a simultaneous Triple Crown: the Kentucky Derby, the Preakness, and the Belmont all run at the same time.

What faces the nuclear industry as it attempts to license and build a new generation of plants, the ELECTRIC POWER sessions demonstrated, are multiple and simultaneous challenges: reactor design certifications, site approval on environmental and economic grounds, and approval of applications under the NRC’s unproven new combined construction and operating licenses (COLAs). 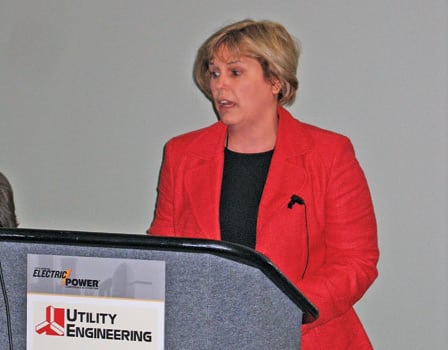 Part of the process will be a flurry of litigation from state and local governments, local and national environmental groups, and unknown other litigants. The NRC’s Madden advised the ELECTRIC POWER audience that transparency and open communications are the keys to winning support for new plants, regardless of the clarity of the engineering and economic arguments. Without support from state and local governments, and from local citizens, siting new nuclear plants will be agonizing.

The process should work as follows. First a design certification for a standardized plant is approved by the NRC. Then a COLA that references the certified design is applied for. Once the NRC awards the license for the first of the standardized plants, additional license applications will reference the first license approval. The only remaining individual plant issues should be site-specific, largely environmental questions. “Standardization, that’s the bottom line,” said Andrea Sterdis, Tennessee Valley Authority’s nuclear licensing manager (see figure). “Without standardization, the COLA process can’t happen.”

Of course, it hasn’t exactly worked that way so far, as became clear in the nuclear track sessions. Constellation Energy’s plan for a new, AREVA-based unit at the existing Calvert Cliffs plant in Maryland has resulted in a two-pronged approach. AREVA’s EPR lacks NRC design certification, although plants employing the EPR are under construction elsewhere. So the NRC is certifying AREVA’s design at the same time as it is processing a COLA for the plant.

Both NRC and Constellation Energy officials acknowledged that riding the dual track for the license is a challenge. But the other COLAs lined up at the NRC’s regulatory doors in Rockville, Md., also pose challenges.

Indeed, as the NRC’s Madden described the process, his agency is engaged in a very difficult juggling act, with more than a dozen balls in the air: design certifications, COLAs, environmental reviews, and the like. Preventing them from crashing down will be a mighty difficult act. Let’s hope the NRC succeeds.