High-voltage direct current transmission (HVDC) has come a long way since 1882 when the first of its type carried power from Miesbach in Bavaria to an electricity exhibition in Munich, 57 kilometers (km) away, at a mere 1,400 V. Last December, just before the world ushered in the new decade, Siemens Energy and grid operator China Southern Power Grid put into operation the first pole of a transmission link between the southern Chinese provinces of Yunnan and Guangdong, a 1,418-km ultra-high-voltage direct current (UHVDC) system. That line has a transmission capacity of 5 GW, and it operates at a voltage of 800 kilovolts (kV) — a world record.

The Yunnan-Guangdong line will transmit power from giant hydropower plants under construction in southwestern China to rapidly growing southeastern industrial cities like Shenzhen and Guangzhou in the Pearl River delta of Guangdong Province. Commissioning of the second pole and start-up of the entire 800-kV system is scheduled for mid-2010. Siemens, with Chinese partners, designed the HVDC system and supplied core components, including 10 enormous 800-kV and 600-kV converter transformers (Figure 5), DC filters, and 800-kV DC components. 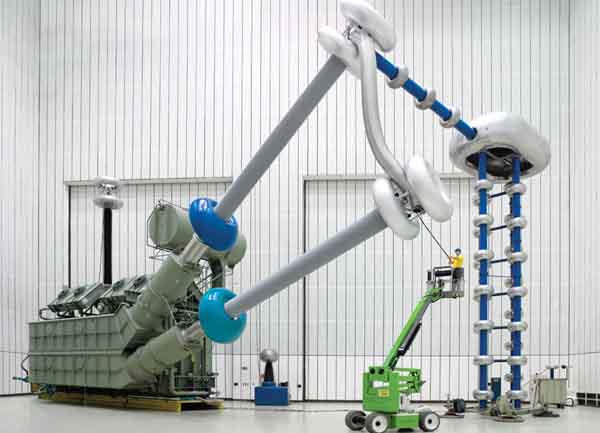 5.     Supergrid transformer. In the next three decades, China plans to build several giant hydropower plants in its southwest region, where abundant hydropower resources are located. In order to get power from these plants to rapidly growing industrial cities like Shenzhen and Guangzhou in the country’s southeast, China is building a long-distance, ultra-high-voltage direct current transmission line that operates at 800 kV—a world record. Siemens Energy will supply the 10 800-kV transformers (shown here) to that project as well as ten 600-kV transformers by May 2010. Courtesy: Siemens Energy

China chose to raise the DC voltage of its new long-distance HVDC links to 800 kV from maximum DC voltage levels of 500 kV to 600 kV currently used worldwide to pare down transmission losses over longer distances, and because it was clearly a much cheaper option. Compared to using conventional alternating current technology, overhead transmission line costs are reduced because only one bipole is needed. When compared to existing 500-kV HVDC, overall costs of the new 800-kV system had been projected to be 25% lower. Siemens says that Chinese customers requested the 800-kV solution, which was still under research and development, even though the German equipment maker had offered a 630-kV HVDC line.

Increasing the voltage rating from previously used 500 kV to 800 kV represented a 60% increase — an unequaled rise in voltage level — and it wasn’t easy, Siemens says. Developing the 800-kV UHVDC transformer was a major milestone because it meant overcoming the key challenge of controlling external and internal insulation requirements. In the UHV range, some insulation characteristics become highly nonlinear. For example, the distance in air clearance required between HV parts and ground can be approximately 4 m to 5 m for 500-kV HVDC systems. For 800-kV systems, however, the 60% increase in voltage level meant that the necessary air clearance nearly doubled.

To achieve this clearance, the most straightforward approach would have been to increase the size of components and the distance between components so as to achieve sufficient insulation strength. But this would have resulted in an extremely large design, and the equipment in many instances would no longer be feasible to produce or transport. The selected approach was therefore to redesign all main equipment exposed to the 800-kV voltage level to ensure an optimum balance between electrical fields and dimensions.

Siemens’ efforts paid off. As well as transformers for the Yunnan-Guandong line, the company is now also set to ship five 800-kV transformers for a second 800-kV project between the Xiangjiaba hydropower plant, located in the southwest of China, to Shanghai, some 2,071 km away. That line — which will possibly be the longest power transmission links in the world when operational later this year — will transmit 6,400 MW of power for owner State Grid Corp. of China.

Swiss company ABB, which also had received an order for that project (14 800-kV and 14 400-kV converter transformers), announced in January that it had successfully conducted the first open-line test for Pole 1 of the line. The test was reportedly accomplished two years after receiving the order, and a year ahead of schedule.