The Springerville Generating Station in Springerville, Ariz. (Unit 3 was POWER’s 2006 Plant of the Year), uses two lined ponds to hold water collected from its cooling towers. With the construction of Unit 4, the plant’s owner, Salt River Project (SRP), one of Arizona’s largest utilities, wanted to increase the capacity of pumps used to move effluent from one pond to another to avoid the possibility of overflow. SRP engineers wondered if using a vertical turbine pump on a floating barge would improve managing the water levels in the two ponds.

The project location was a challenge to designers of the fluid-handling systems. The generating station, located in an area known as the Gateway to the White Mountains, is at an elevation of 7,000 feet and often experiences wind speeds that gust up to 90 miles per hour. The solution also had to accommodate occasional subzero temperatures and fluctuating pond levels — the result of rainwater and snow runoff.

Originally, the specification was to supply one stainless steel pump barge capable of supporting two submersible pumps (including motors) with an associated piping manifold that would extend to the edge of the barge. The plan for the ancillary barge equipment included a discharge manifold with flanged connections, check valves, isolation valves, and an overhead trolley for servicing the two pumping units. The floating barge also would house a duplex pump control panel and a 40-foot-long floating walkway that would be used to access the shoreline.

This approach proved to be more expensive than expected but also posed an additional problem: SRP did not want any penetrations through the liner, so the pumps and pipe could not be secured in place.

Several other design iterations considered using submersible turbine pumps supported by a pipe at the edge of the pond on a 45 degree angle or self-priming pumps that would be situated on the dry bank of the pond. SRP eventually chose the latter solution.

Ultimately, two Gorman Rupp T2 series model T2A60 V-belt-driven pumps with 10-horsepower U.S. Electric motors were installed (Figure 10). These pumps were chosen for their reliability and their ability to accommodate the limited net positive suction head available. The pumps were then enclosed in a prefabricated, insulated fiberglass structure provided by Kysor Panel Systems that is equipped with space heaters and temperature controls. 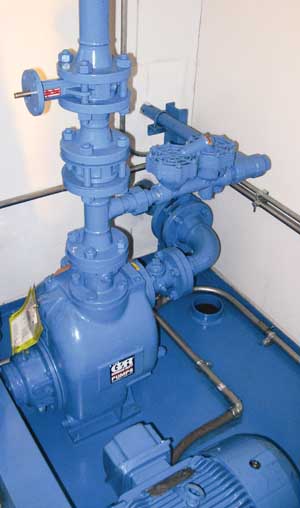 10.    Pond level controls. Salt River Project recently retrofitted its cooling tower blowdown retention ponds at Springerville Generating Station with self-priming pumps, located on the dry bank of the ponds. The new pumps, which replace vertical turbine pumps that were problematic, automatically operate when required and are enclosed in an insulated and heated enclosure to protect the fluid-handling system from freezing during the cold winters. Courtesy: Quadna Inc.