Plans to install a series of solar panel farms in the Sahara Desert to power Europe and North Africa are heating up. The idea was discussed in May as part of the newly formed Mediterranean Union, launched at a summit in Paris, and it now has the backing of both UK Prime Minister Gordon Brown and French President Nicolas Sarcozy.

More recently, Germany’s Wuppertal Institute for Climate, Environment and Energy and the Club of Rome issued a study that said the project could generate some €2 trillion worth of power through 2050. And this July it received yet another major boost, with 12 companies congregating at the request of German insurance firm Munich Re and formally agreeing to analyze and develop a multidimensional framework for the €400 billion project. The Desertec Industrial Initiative, as the 12-company coalition is now called, includes European giants Deutsche Bank, Siemens, ABB, and utilities E.ON, RWE, and Abengoa Solar.

At the heart of the ambitious Desertec project is the goal to establish 6,500 square miles of concentrated solar power plants in the vast African and Middle Eastern deserts, along with a super-grid of high-voltage transmission lines, to supply countries in Europe and Africa with electricity. The project could supply continental Europe with up to 15% of its total energy needs — producing a stunning 20 GW of power by 2020, as Guenter Gloser, Germany’s deputy foreign minister, told Reuters in June. The first possible power station would be a 2-GW solar thermal power station in Tunisia with power lines to Italy, a project that would take five years to build.

According to the Desertec Foundation, satellite studies conducted by the German Aerospace Center show that by using less than 0.3% of the entire desert of the Middle East/North Africa region, enough electricity and desalinated seawater can be produced to meet the growing needs of these countries and of Europe (Figure 7). The German Aerospace Center also assumes that in 10 to 15 years, electricity from solar power plants will be able to compete with medium-load electricity from fossil power plants. 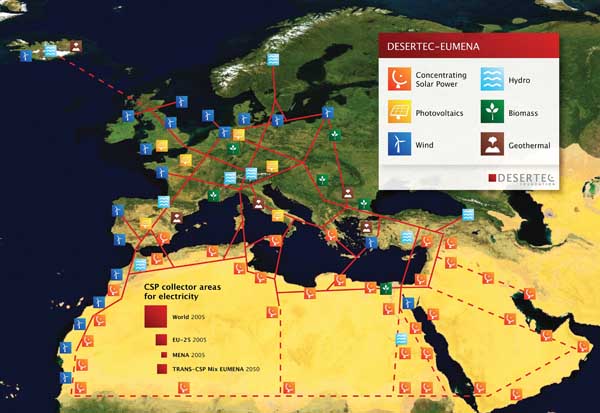 7.     Built on sand. Several European countries are backing an ambitious project that seeks to establish 6,500 square miles of concentrated solar power plants and a super-grid of high-voltage transmission lines in the vast deserts of North Africa and in the Middle East, saying that they could power 15% of Europe’s energy needs by 2050. The project got a major boost this July, when 12 major European companies agreed to study and devleop the €400 billion project. Courtesy: Desertec Foundation

But not everyone is convinced that the project is feasible. Vattenfall prefers not to support the undertaking, because "it costs too much money" and "transmission costs are too high," as the Swedish state-owned utility’s CEO Lars Josefsson told the Financial Times in June. "I don’t think it’s realistic," he said, adding that securing Europe’s future energy needs should be focused on developing carbon capture and storage technology for coal-fired power plants.

Even Munich Re — which spurred a media frenzy about the project by publicly inviting Europe’s energy giants to discuss the project — recognizes the cost obstacle. The insurer said recently in a statement that, "despite the use of known technologies, implementation of such a visionary concept will require substantial initial financing. Therefore, DESERTEC can probably only be put into practice if suitable incentivisation mechanisms are in place to make such investments worthwhile for investors."

Other critics have expressed concerns about becoming energy dependent on politically unstable North African countries in the Sahara and about the concept of centralized transmission lines, which could be vulnerable to terrorist attacks. Project proponents counter by saying that the EU already imports energy from regions and sources that are not risk free.