News has been emerging from around the world about several projects that seek to turn human sewage — arguably the dirtiest of manmade wastes — into clean energy.

This June, Atlanta start-up EnerTech Environmental unveiled the first U.S. commercial biosolids-to-energy facility in Rialto, Calif. (Figure 8). The $160 million facility employs SlurryCarb technology, using heat and pressure to transform sewage sludge — 80% of which is water — from five Southern California municipalities into fuel pellets to be burned at local cement kilns. Currently, the plant operates at 60% capacity. At full capacity, it will be able to process 270,000 wet tons of biosolids. 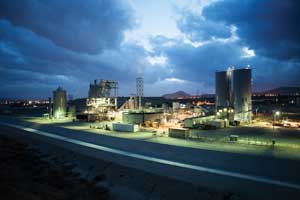 8.     Green—if not clean—energy. Atlanta start-up EnerTech Environmental this June unveiled the first U.S. commercial biosolids-to-energy facility in Rialto, Calif. The facility turns sewage sludge—80% of which is water—from five Southern California municipalities into fuel pellets that will be burned in local cement kilns. The so-called E-fuel is 95% solid and interchangeable with coal, the company said. Courtesy: EnerTech Environmental

The so-called E-fuel is 95% solid and interchangeable with coal, the company said. SlurryCarb can also treat animal manure, lumber and paper wastes, and agricultural wastes. The technology was developed from demonstration plants processing municipal solid waste in Ube City, Japan, and a demonstration plant in Atlanta, which can process 1.6 tons of sludge per day. The company is now looking at building a similar plant in New York, but it expects that — especially because some 7 million tons of biosolids are produced in the U.S. each year — municipalities across the nation will show interest in the renewable fuel.

Across the pond in the UK, meanwhile, United Utilities teamed up with grid operator National Grid to produce biogas from wastewater sludge at one of the UK’s largest wastewater treatment plants at Davyhulme in Manchester, using anaerobic digestion. The biogas is then upgraded to biomethane, compressed, and injected into the local gas pipeline network or used as fuel for a fleet of sludge tankers. The £4.3 million pilot plant — which United Utilities describes as a "poo power" project — has been in development for some time, but it only recently received funding from the country’s environment department. The plant should be operational by 2011.

Few Manchester residents are raising a stink about the government’s determination to put its money in the toilet, because the pilot project has been touted as a renewable project that will help the country meets its target of 15% renewables by 2020. United Utilities also stresses that sewage treatment is a 24-hour process that provides an endless supply of biogas. National Grid, too, is confident that there should be no fundamental technical difficulties in injecting biomethane into the gas distribution network. Several plants in Europe have already demonstrated it can be done, it said.