Reducing the minimum load at which a steam turbine can reliably operate is one way to increase revenue for marginal base-loaded units during periods of low electrical demand. For this reason, it is not unusual to see merchant plants operating at "super minimum" load levels that are well below the typical 25% rated full-load limits. However, such units are operating well outside the original equipment manufacturer (OEM) design basis, and owners may experience undesirable damage to their turbines for a number of reasons. That’s why it is important for owners to understand the trade-offs and risks that come with such operation.

The following is an overview of the main steam turbine and generator issues that must be considered before deciding to operate a steam turbine generator below OEM minimum load limits.

Units with partial arc admission, where the lower arc valves open first, are more susceptible to increased vibration at reduced minimum loads. This is due to unbalanced upward steam pressure forces that tend to lift the rotor and partially unload the high-pressure/intermediate-pressure (HP-IP) bearings.

Older units employing plain journal bearings may experience oil whip and related vibration at reduced bearing loads. Assuming that proper supervisory instrumentation exists, a load test can determine if this is a concern. The operator can perform a load test and perform bearing adjustments at the next outage to determine if minimum load can be reliably reduced. Proper bearing clearances and preloads may be sufficient to eliminate this concern.

If adjustments to the bearings alone do not address oil whip concerns, the operator has two options: change the admission sequence such that the cover valves open first and convert to full arc admission, or retrofit the unit with tilt-pad bearings. A tilt pad retrofit to maintain stability and acceptable bearing vibration level is often the best option. 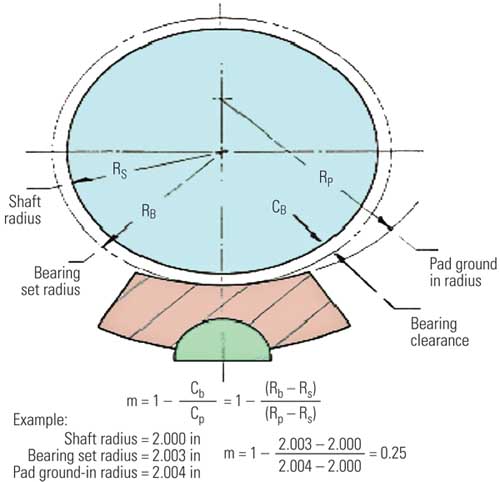 1.    Tilt pad bearing preload. Pad preload, m, is the amount of convergence and divergence that is built into the oil film through the pad geometry. If the pad surface is completely concentric with the shaft, the pad is said to have zero preload. Some shaft eccentricity is needed to create a converging oil film. By adding preload, the bearing load capacity and stiffness are usually increased, and the possibility of pad flutter is reduced because the top pads carry more load. Preload is accomplished by boring the arcs of the pads to a larger diameter than the clearance diameter. Typical preload values range from 0.0 to 0.5, with the most common being about 0.3. Source: TG Advisers Inc.

At super minimum loads, particles exfoliating from the boiler are throttled at much higher velocities through the inlet valves. As a result, the rate of erosion is accelerated on the first few stages of stationary and rotating vanes, especially on units with partial arc admission (Figures 2 and 3). Increased throttling also results in additional thermodynamic losses that affect heat rate. Treating the vanes with an erosion-resistant coating can mitigate nozzle block wear. A more permanent solution is to convert the unit to sliding pressure operation and/or redesign the nozzle block (first set of stationary vanes) to reduce impingement angles. 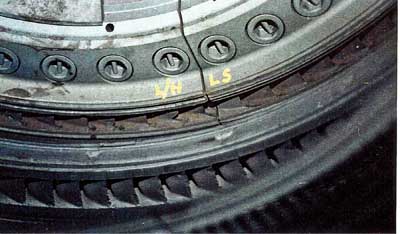 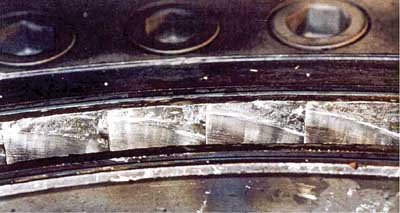 3.    Nozzle block weld repairs. The HP nozzle block vanes may also experience increased particle erosion but can, under most circumstances, be weld-repaired and returned to service. Courtesy: TG Advisers Inc.

Boiler temperature droop at lower loads typically occurs in both reheat and main steam conditions. Lower steam temperatures will increase moisture levels and also move the saturation line further upstream (near the Wilson line) of the last stages of the low-pressure (LP) turbine. At the Wilson line, the state where the first liquid droplets appear, chlorides become concentrated and stress corrosion concerns are elevated (Figure 4). 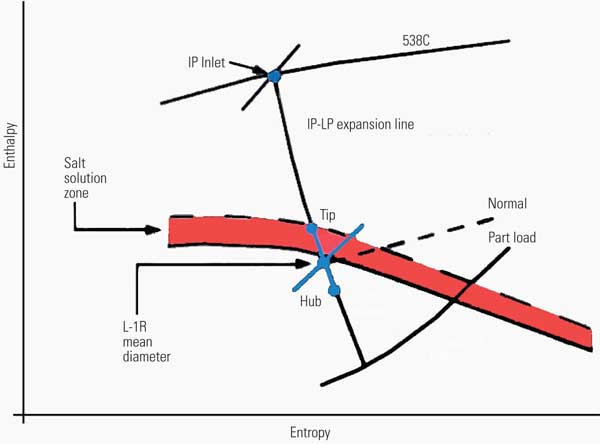 4.    LP salt solution line. The Wilson line is often the zone of first condensation in the LP steam turbine, where steam moisture is typically about 3% to 4%. Concentrated chloride solutions are often present. The salt solution zone is bordered by the saturation line (dashed line) on top and the Wilson line (the solid line) below the red area. Source: TG Advisers Inc.

Running a test to optimize boiler operation and efficiency at minimum load is also an important part of a steam turbine generator operations assessment. Moving boiler burner tilts positive, and frequent sootblowing, can increase steam temperatures at low loads, although this often occurs at the expense of increased moisture in the last turbine stage (Figure 5). Sliding pressure may also support lower moisture levels, if this capability exists. 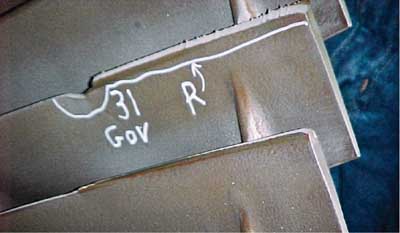 Monitor Heating of Exhaust Hood and Operation of Sprays

At low loads, significant flow losses on the last-stage blades result in increased blade heating. Hood temperatures usually are not problematic at super minimum loads, but they should be monitored, and spray capabilities should be verified before testing.

Also, conditions of high stress can occur due to stall and blade buffeting vibration. This increased stress can be measured from strain gauge data because blade vibrations are not detected by traditional bearing vibration-detection systems. In many regions of the U.S., there are plants that have load limitations during summer periods because of higher-than-acceptable backpressures caused by inadequate condenser cooling. Unless this issue is addressed, low minimum load during high backpressure conditions (typically over 4.5 inches Hg) should be avoided. Good operating practices such as frequent condenser tube and tube sheet cleaning can help provide additional margin at minimum loads.

During low-load periods, boiler droop will cause temperatures to drop from nominal design conditions. This increases the fatigue effect of load swings from minimum to full load. Typically, the effect is minor, but depending on the amount of cycling, the cumulative effect can be casing and rotor cracking. Typical locations for low-cycle fatigue cracking include diaphragm ledges, steam chest bridges, and ligaments between bolt holes. During a major outage, complete nondestructive examination should be made in these areas and any detected cracks charted for length. In subsequent outages, the same procedure should be repeated to determine the rate of propagation to support future repair decisions.

Although it is unlikely, thrust imbalances may develop with excessive thrust bearing temperatures. Temperature monitoring is a way to assess this risk.