For busy staff in the field, nothing is more frustrating than having laptop computers or smart phones crash due to lost connections when those devices lose wireless coverage. Often, important data is obliterated and workers have to waste precious time reentering the lost information.

The irony is that wireless data connections, which are increasingly being used by power plant field personnel, are intended to boost productivity.

However, many field workers find that once the novelty of wireless devices wears off, serious problems surface that cut the productivity gains those wireless devices and their data management capabilities are supposed to offer.

Nowadays, on-site and field staff at power plants use a variety of wireless devices, including laptops, smart phones, and personal digital assistants (PDAs — mobile phones that include limited computing capabilities). Wireless coverage gaps can affect workers both within and outside a power plant. Typically, the common problems related to deployment of these devices include the following:

Power plant personnel using wireless devices are likely familiar with a couple of all-too-common scenarios. In the first, the field employee logs onto a laptop computer equipped with a wireless modem card from a cellular provider that’s enabled through Wi-Fi. This assumes that the worker’s laptop has a secure connection and the computer’s data is safe from hackers. The worker then travels to another location, enters a coverage gap, and the data connection is lost. At this point, the worker must log back into a wireless network from the new connection, restart applications or devices, and reenter any lost data. These actions can be very time-consuming and impair the worker’s productivity.

In a different but equally frustrating scenario, the field worker travels over a large area where different types of wireless data networks are available to deal with a service call or respond to a power outage. In this instance, the worker is unable to seamlessly switch between cellular networks and the Wi-Fi network that is used at the power plant’s main location. At that point, the worker loses the data connection and must manually reestablish a connection and restart applications.

Until recently, the IT (information technology) departments at most power plants have lacked centralized tools to deal with complex management issues such as coping with the status of laptops and smart phones being used across different networks and handling software and anti-virus/security software updates for mobile devices.

Fortunately, such frustrations can now be avoided due to a breakthrough technology developed by NetmotionWireless. The company’s Mobility XE Mobile VPN (virtual private network) is designed to help companies maximize the security, productivity, and management of their mobile field workers who are using wireless technology.

In a recent interview with POWER in September, Pam Cory, the vice president of marketing at NetMotion Wireless, explained that with Mobility XE VPN, wireless field workers have secure, remote access to critical applications and information from virtually anywhere. Power plant personnel who use it can successfully handle the unique problems associated with mobile computing, such as wireless security, coverage gaps, roaming, performance, and handheld device support.

"Each case presents unique challenges for workers in a power facility," said Cory. "Coverage gaps, for example, can cause an application to lose data or fail altogether. The lack of roaming between networks (including different Wi-Fi networks on the same site) can force workers to focus on the device itself, instead of on their primary job. And the lack of central management capabilities makes it more difficult for IT managers to make sure that their mobile workers remain productive and secure."

According to Cory, the primary function of the mobile VPN is to provide secure connections to applications and company resources across wireless coverage gaps and across various networks. The mobile VPN itself is a client-server solution. This means that NetMotion’s software resides on a server within the power plant’s IT infrastructure, and a small application resides on a laptop, PDA, or smart phone. Together, this software package ensures that workers can securely access information despite difficult wireless coverage conditions (Figure 1). 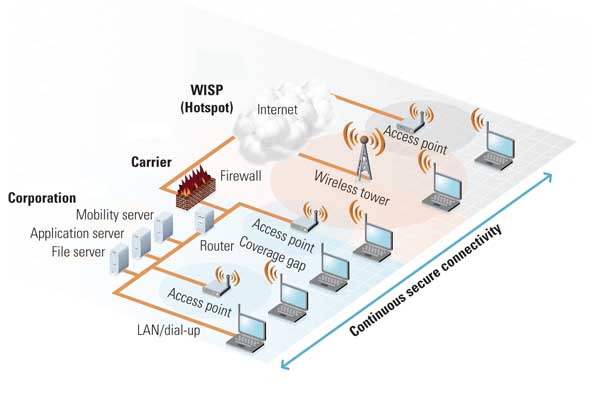 "Mobility XE insulates applications and data from a lost wireless connection," she said. "It does this by essentially ‘tricking’ the applications into thinking there is a stable wireless connection, even if there isn’t one. Wireless coverage isn’t always perfect (think dropped phone calls), so in our case, we make wireless computing more reliable by making it so that these dropped connections do not affect productivity. This is the core of NetMotion’s patented technology, which is used by more than 1,500 companies and agencies across the globe."

Cory explained that Mobility XE is typically deployed on a "ruggedized" laptop (one that has some level of protection against rough use), PDA, or smart phone, and can be used by both workers within a power plant or by field technicians who support power operations. According to Cory, the mobile VPN is more commonly used by workers who are highly mobile, spending the majority of their days addressing customer issues in the field, or repairing equipment at remote customer sites, but many corporations also use the software within a "campus setting."

According to Cory, one of the primary benefits of her company’s product is that using it requires little or no training. The software is brought into scenarios most frequently when wireless connections are presenting a productivity challenge. The challenges typically resolve themselves when Mobility XE VPN is used with the workers’ devices. She said that the company views a deployment as successful "when the worker doesn’t know our software is active, or ever interfaces with it."

JEA (formerly known as Jacksonville Electric Authority), one of the largest municipal utilities in the U.S., provides electricity, water, and sewer services to more than 750,000 accounts in northeast Florida. In the utility’s ongoing effort to improve customer service and reliability, IT staff at its plants focused recently on optimizing wireless communications for their mobile field personnel. The task is a complex one, because no single wireless communications network covers the entire 841 square miles of JEA’s service territory.

When problems such as hurricanes arise, JEA’s field workers are the utility’s first responders. They respond to power outages, fix meters, handle breaks in water and sewage mains, and turn service on and off. Even when it’s not hurricane season, these workers’ days are tightly scheduled. Communicating wirelessly makes sense for these field workers, but any wireless system has to meet JEA’s criteria:

Kent Mathis, a registered professional engineer with the state of Florida who works in JEA’s New Technologies Department as a research project consultant, led the search for a solution. JEA had tried some IPSec and SSL VPN solutions, but their performance was not what the IT staff at JEA had hoped for, as these technologies were designed with wired, not wireless, connections in mind. A more specialized solution was needed, so Mathis developed a request for proposal to which five companies responded. During evaluation and testing, NetMotion Wireless was represented by USAT Corp., a partner specializing in mobility systems integration.

Mobility XE stood out from the competition on two important fronts:

Ameren provides energy services to 2.4 million customers in Missouri and Illinois and natural gas to nearly one million customers. Recently, the utility began using Mobility XE software because its workers needed secure wireless access to customer and headquarters data when in the field on outage responses or service calls. Now when workers move in and out of wireless coverage areas, they no longer have to reconnect, or log back in to applications, or reenter lost data when connections are lost.

Cory pointed out the key benefits of the software for Ameren: