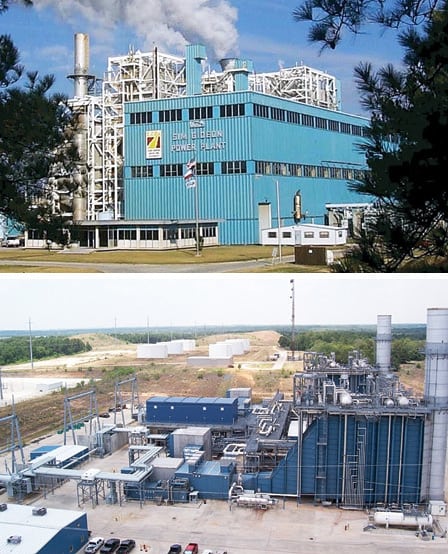 POWER, in its June 2007 issue, profiled the control system upgrades of the three SGPP units that made them among the fastest responders in ERCOT despite their advanced ages: 35, 39, and 42. LP1, a 2 x 1 plant, began generating and selling electricity in May 2001. GenTex Power Corp., an LCRA affiliate, built the Lost Pines facility in an equal partnership with Calpine Corp. in 2001. Two years later, LCRA purchased the remaining half of the facility, becoming its sole owner.

A single plant staff was formed in February 2006 by merging the employees of both plants. The first order of business: find a way to effectively manage and efficiently operate an integrated facility at which each plant is operated independently. One of the principal challenges was to bridge the gaps between the facilities’ operator and technician experience bases (steam vs. gas turbine) and ages (new vs. 40 years old).

Integration of the two facilities’ control and communications networks at a fundamental level required not just a meticulous look at their wires and pipes but also consideration of issues such as:

However ambitious these goals appear, the transition to a fully integrated O&M staff began with determining the basics of how its members were to communicate. Let’s start at the beginning.

LCRA management began looking to replace the public address (PA) systems of all facilities in its Wholesale Power Services business unit before LCRA and Calpine built LP1 six years ago. The push-to-talk hardwired PA systems that had been deployed across the entire generation fleet many years before were already showing signs of technological obsolescence.

LCRA’s telecommunications department solicited requests for proposals from various vendors for replacement PA systems. When the quotes came in, the combined cost of replacing the PA system at SGP and adding a PA system to LP1 (which was built without one) far exceeded the project budget. Most of the cost was for installing new conduit and wires throughout LP1 to accommodate a traditional hardwired system while dodging unknown underground obstacles. Sticker shock and other risk factors made the conventional approach less desirable and initiated a search for a creative solution.

In 1995, LCRA hired Invensys Process Systems (www.invensys.com) to provide IT infrastructure support under an agreement that was later renewed for another 10 years. Invensys is a leading supplier of innovative technologies to power plants. During an early meeting of the partners, the company proposed using wireless technologies to integrate communications and control of the two plants at Lost Pines Power Park.

Leveraging its partnership with Apprion Inc. (www.apprion.com), Invensys proposed that LCRA use a wireless Wi-Fi system under a WiMAX “umbrella” to provide a secure access point for interfacing any known wireless device protocol to control and corporate networks. Apprion’s vendor-neutral wireless solution also would allow continuous monitoring of system health and detect intrusions by rogue devices or cyber terrorists.

Communications system security is of paramount importance, given the new standards for power generators recently introduced by the Federal Energy Regulatory Commission and the North American Electric Reliability Corp. (see Focus on O&M). Complying with these standards and with LCRA’s internal IT standards was a major challenge, but making the effort to do so paid off: The wireless system cost 44% less than a conventional approach using wires and conduits.

Going wireless also “future-proofed” LPPP by enabling additional applications to be added at only incremental costs. LCRA says up to 75% savings have been realized by reducing engineering, drafting, installation, and materials costs and by minimizing administrative and overhead costs and implementation times.

The next step in the project was to perform a strategic assessment of LPPP’s infrastructure to determine if deploying a wireless network within and across its two power facilities was possible.

The assessment determined the optimal location of wide- and medium-bandwidth transceivers, identified where to put the logical integration terminals that provide the physical connections to SGPP’s and LP1’s existing fiber/wired IT infrastructure, and set the site-specific requirements that potential application vendors for LCRA’s plants would have to meet. This work was done by Invensys and Apprion using radio frequency spectral analysis at strategic locations.

The assessment determined that it would indeed be possible to implement a wireless broadband umbrella. It would use WiMAX to cover both plants but Wi-Fi for local-area network access and to reach their remote parts, eliminating the need to install costly Ethernet cables. The WiMAX umbrella provides wide-bandwidth wireless coverage throughout LPPP and connectivity up to 25 miles away. The WiMAX broadband connection serves as “virtual fiber” that connects LP1 to SGPP and enables the two facilities to share and communicate data using the same Voice over IP (VoIP) system. Plans are to extend the system to LCRA’s other remote sites.

Personal communications are now virtually instantaneous because all field workers wear a VoIP communications badge. When a worker needs to communicate with a colleague anywhere at LPPP, he or she voice-activates the device with a simple command, such as “find Bill.” Wireless communications make an 802.11b connection through an access point at a local mesh network. The command is sent to the VoIP server installed at LPPP’s central management control center. The server manages all users, security, data, and communication.

The following wireless network infrastructure, components, and features are now on-line at LPPP: 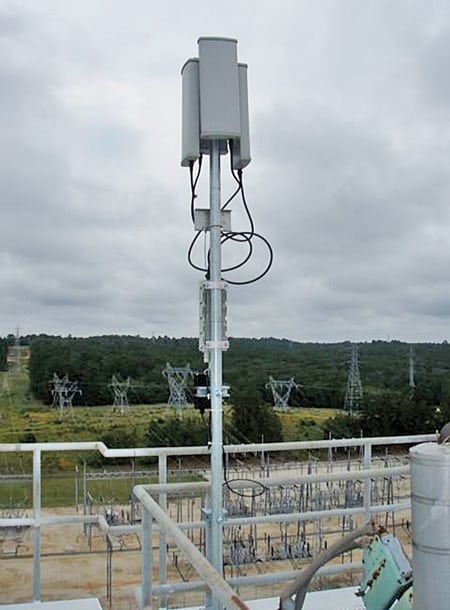 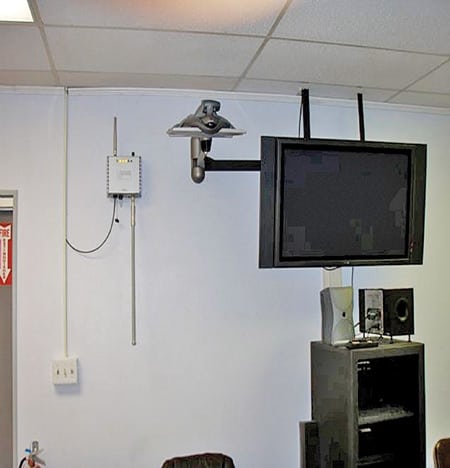 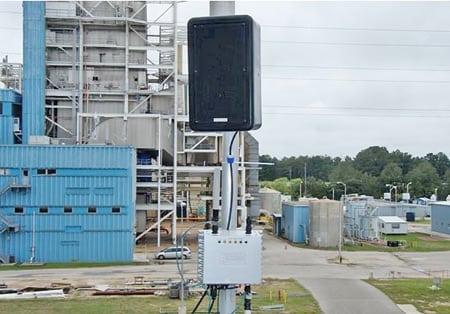 4. Shout it out. Wireless PA speakers were added to Lost Pines 1, eschewing a much more expensive approach using cables and conduits. Courtesy: LCRA

An industrial wireless application network manages the Wi-Fi/wireless infrastructure by:

The single wireless platform that LCRA deployed to meet the communications and data monitoring needs of two large plants is scalable, so software applications can be added to it in the future. The company has also used that capability to optimize and automate a number of its work processes and to reduce LPPP’s operating costs.

For example, the system includes a comprehensive wireless network support package that should be able to handle virtually all of the site’s communications and data needs well into the future. The package comprises: 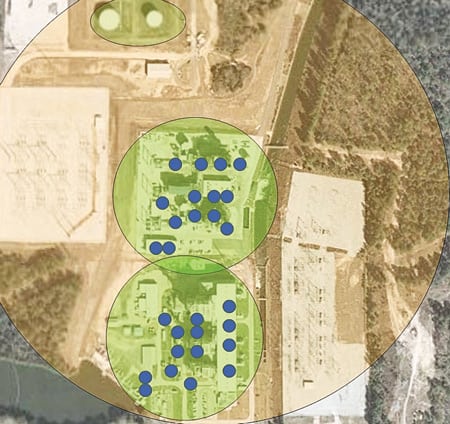 Next on LCRA’s agenda is extending the wireless infrastructure to many other areas of the two plants to leverage its communications and control capabilities. The objective is to continue increasing worker mobility and to find other ways to cut O&M costs by raising productivity. Among the wireless applications now being considered or developed are:

Now that it is reaping the benefits of wireless technologies at LPPP, LCRA is integrating them into the conceptual design of a remote, unmanned peaking plant to be built about 24 miles away. (For more on power plant controls technology, see the sidebar.) The concept is to expand connectivity through LCRA’s existing fiber network and WiMAX technology to provide the same capabilities—and then some—currently showcased at Lost Pines. The new plant, tentatively called the Winchester Power Park, will be remotely operated from the Sim Gideon plant.

POWER is privileged to be the official publication of the 51st annual Power Industry Division (POWID) Conference/18th Annual Joint POWID/EPRI Conference scheduled for June 8–13, 2008, at the Hilton Scottsdale Resort & Villas in Scottsdale, Ariz. The theme of this year’s conference is “The Pathway to Power Automation for the 2010 Decade.” Its agenda will cover topics ranging from software for fossil-fueled plants to cyber security standards compliance to advanced plant controls and wireless technologies. For more information, check out the conference program details at www.isa.org/~powid/powid_2008_%20main.htm.

Acknowledgement: Portions of this article are based on a paper by David Runkle of LCRA and Stephen Lambright of Apprion titled “Wireless Infrastructure Implementation in a Power Generation Site: Lower Colorado River Authority (LCRA), Lost Pines Power Park.” It was presented at the 17th Annual Joint ISA POWID/EPRI Controls and Instrumentation Conference.