Many companies are finding that with solar energy, the sky’s the limit. As costs fall and mandates for renewable energy rise, solar energy is becoming an increasingly competitive source of power generation. Far West Rice Mill is a forward-thinking business that is taking advantage of this economic opportunity by powering its operations with a 1-MW photovoltaic system.

Solar power is a shining example of an abundant renewable and pollution-free energy source. More important to businesses and individual consumers wanting to take advantage of it is the reality that today’s rapidly evolving technology provides flexible ways to employ both the heat and light of the sun. Another plus for this energy source is that the U.S. has some of the richest solar resources in the world, according to the Solar Energy Industries Association (SEIA).

The Far West Rice Mill, which produces organic rice, is one of a growing number of U.S. businesses turning to solar power because they seek a nonpolluting energy source that also provides predictable costs (Figure 1). 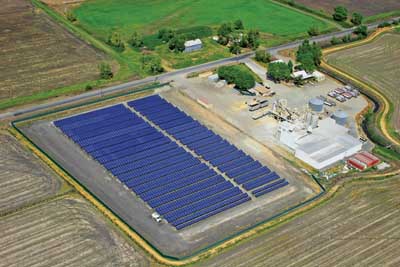 Because photovoltaic (PV) systems use solar cells to convert sunlight directly into electricity, they can be installed in close quarters to energy use, which gives this technology the ability to alter the model of how and where energy is produced.

PV modules consist of semiconducting material, such as silicon, that absorbs sunlight in a way that frees electrons from atoms. Electricity is produced as the electrons flow through the semiconducting material. Metal contacts on the top and bottom of the PV cell allow the current to be drawn off for external use. Groups of PV modules are typically combined in an array to generate electricity for a single structure. Large numbers can be combined to form a power plant.

Mark Frederick, managing partner for Pacific Power Management (PPM), said his company installed the PV panels at the Far West Rice Mill. "The U.S. uses an estimated 3,816,000,000 MWh of electricity, and the percentage of solar electricity is very small," he said. "However, the amount of electricity that is generated through solar is increasing significantly as production has been doubling every two years."

In its recent report, U.S. Solar Market Trends in 2007, the Interstate Renewable Energy Council describes how solar markets are booming in the U.S. due to rising energy prices, strong consumer demand, and financial incentives from the federal government and many states and utilities. More than 80,000 installations were completed in 2007, but the majority of market share for each solar technology is concentrated in a few states. The capacity of PV installations completed in 2007 grew by 48% compared with 2006, and the average size of PV systems is growing. The two largest U.S. installations, one in Nevada and one in Colorado, were completed in 2007.

The PV market is expanding to more states, though California remains the dominant market.

Far West Rice Inc. is a family-owned and -operated rice milling and marketing company located in the heart of northern California’s rice-growing region. The company operates its milling facility in accordance with the California Certified Organic Farmers Association and the U.S. Department of Agriculture’s organic guidelines. The decision to add the 1-MW solar electric system to the company’s milling facility shows the owners’ commitment to protect the environment and promote sustainable farming practices. Conveniently, Far West Rice Mill has a large acreage that gets direct sunlight, which makes it ideal for solar electricity.

Johnson’s father, C. William Johnson, started Far West Rice in 1985 and was actively involved in the design of the plant 15 miles south of Chico, in Nelson.

"Going solar made sense from a business standpoint," Greg Johnson said. "Our electricity bill will be lower, and the installation also means that our communities can breathe easier and enjoy California’s beauty with less air pollution. We are excited to be involved in this technology and know that it will exceed our expectations."

Sarah Modgling, marketing manager for PPM, spoke to POWER in October. "Far West Rice Mill’s is a 1-MW system," she said. "It is expected to generate 1,440,000 kWh of electricity per year. This will cover approximately 70% to 80% of the total electricity costs. The solar electric system is still connected to the Pacific Gas & Electric [PG&E] electricity grid, so any electricity that is generated that isn’t immediately needed is put back onto the grid. The solar modules are mounted on the ground next to the rice mill. When the plant is not operating, the solar system will feed electrical power back into the electrical grid." 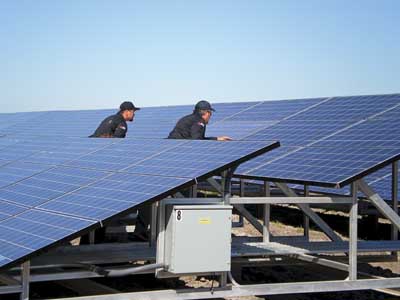 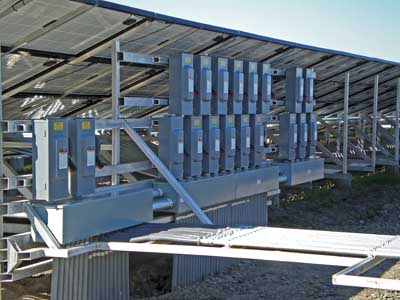 3. Neither sun nor rain . . .  The PV modules are engineered for extended use in environments with extreme temperatures and harsh weather conditions. Courtesy: Pacific Power Management

Mitsubishi Electric module frames have been designed with a slope that’s 30% lower than that of traditional modules. This innovation can enable more power generation by preventing dust from accumulating in the panel area.

One important advantage of solar electric systems is the minimal operations and maintenance time needed to keep them functioning. "A great aspect about solar electricity is that there are not any moving parts, which means that it doesn’t require much maintenance," Modgling said. "The panels just need to be washed about every six months because debris buildup can decrease their production" (Figure 4). 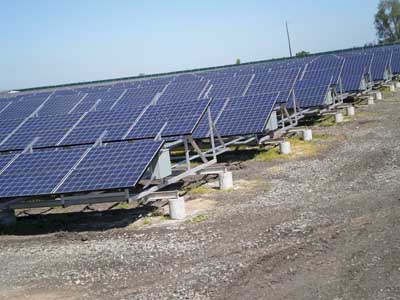 4. Design innovation. In order to improve the PV modules’ water drainage, the manufacturer added holes on the edge of the frame back. Better drainage helps to mitigate damage from water and the accumulation of moss or dirt. Courtesy: Pacific Power Management

Gina Heng, director of sales and marketing for Mitsubishi Electric’s PV division, said: "We are pleased that our technology was chosen for this major agricultural installation. Agribusiness shares our concern about the rising cost of energy, and solar can help provide predictable energy costs over the long term."

The mill’s owners did not have to pay any cash down for the system, according to Modgling. "The cost of the solar electric system was $6.5 million," Modgling said. "This cost was offset by a $1.8 million solar rebate by PG&E (Figure 5). Financing was all done through Pacific Power Management of Auburn, Calif. There was also a 30% federal tax credit." 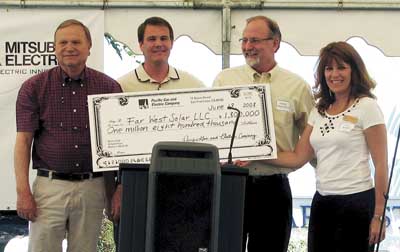 "No additional installation is planned," Modgling said. "Rebates are only given for a maximum of 1 MW, so at this time it would not make financial sense to install any additional solar panels."

Utilities are warming up to solar power

Beyond its involvement with the Far West Rice Mill, PG&E is promoting solar energy in other ways. In August, the California-based utility announced it will buy 800 MW of solar-generated electricity from two companies. It already had approximately 473 MW of grid-connected PV capacity installed throughout the country as of the end of 2007, so this announcement from a single electric utility to almost double its installed amount is a strong signal of the growing role solar energy is playing in the nation’s future energy mix. PG&E’s plans include a 550-MW PV plant with Optisolar and a 250-MW project with SunPower, both to be constructed in phases between 2010 and 2013.

The greatest challenge the U.S. solar market faces going forward, according to SEIA, is scaling up production and distribution of solar energy technology, such as PV modules, to drive the price down to be on par with that of fossil fuel sources.

The cost of photovoltaics has fallen drastically since the early 1970s — as much as 90%. Once considered prohibitively expensive compared with other energy sources, solar energy is being transformed by new innovations that are making it more competitive. For example, this year scientists at the U.S. Department of Energy’s National Renewable Energy Laboratory set a world record in solar cell efficiency with a PV device that converts 40.8% of the light that hits it into electricity. This is the highest confirmed efficiency for any PV device to date.

Additionally, the recent renewal of the federal investment tax credits for 2009 will help promote U.S. solar markets next year. By a vote of 263-171, the U.S. House of Representatives passed historic legislation this past fall that will:

Overall, solar energy is becoming an increasingly attractive option for both small- and large-scale uses. Even in light of recent economic challenges in the U.S., the future of this renewable energy source appears to be brighter than ever.