Rare earths—some 17 elements (some scarce and some abundant) found in Earth’s crust by themselves or combined with other chemicals—may be a major hurdle in the renewable energy supply chain. The metals and their compounds are used in battery technologies, windmills, catalysts, and communications technologies.

The majority of the commercially useful rare earths today come from mines in China. That’s a problem.

The rare earths occupy 57th to 71st place on the periodic chart of the elements. Discovered largely in the 19th century, the minerals have proven useful for modern technologies because of their electrochemical properties. They are crucial to advanced, high-temperature superconducting technologies, in addition to being used in windmills, electric vehicles, and new lighting technologies.

China owns the market for the most important rare earth metals, producing almost 100% of dysprosium and terbium, both crucial to the advanced performance of electric motors and lighting (see figure). Today, demand for the rare metals is booming. But China has been exploiting its dominant monopoly of rare earths to manipulate the market, according to U.S. commodities analysts. 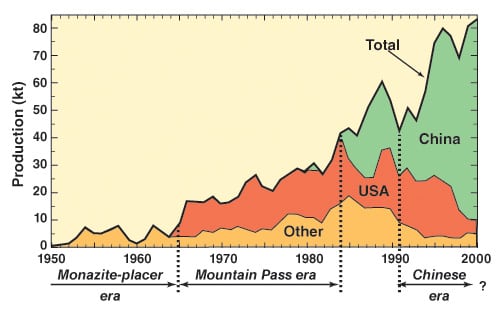 These are not internationally traded commodities on transparent markets, so sussing out market price trends is difficult. Analysts surveying the market assert that China is using its market power to control prices and benefit its domestic producers and users.

The Chinese government late last year announced it would cease exports of rare earths to favor its own manufacturing of wind turbines. Following international protests, China backed off from its threat but said it would increase its restrictions on rare earths exports by 12% annually, in order to favor domestic producers.

China’s policy has caused several U.S. and international wind turbine developers, including General Electric, to shift turbine manufacturing from the U.S. to China to ensure access to rare earth supplies. Because the military uses rare earths in a variety of military applications, such as night-vision equipment, Congress ordered the Department of Defense to review the U.S. military’s reliance on imported rare earths, with a report due April 1.

The New York Times noted, “These elements come almost entirely from China, from some of the most environmentally damaging mines in the country, in an industry dominated by criminal gangs.”

What to do? Some suggest that the U.S. should revive its domestic rare earth mines, which supplied a major portion of the world’s demand until China’s lower-cost capacity undermined U.S. production. Jack Lifton, an analyst and documentary filmmaker, recently argued that the U.S. should respond to the world supply situation by reactivating “the rare earth mines we have and by starting new ones in the United States and North America. If we don’t start producing our own critical and strategic metals and minerals, we’re going to find that our industry, and anything we want that uses those materials, will be made in other places such as China.”

Another supply-chain mineral that may give pause to U.S. green power developers is lithium, not a rare earth by chemical or physical definition, but a crucial ingredient in the batteries that are the heart of planned electric vehicles. The lithium problem is located in Bolivia, and it is political.

Today, most of the world’s lithium carbonate, the chemical compound that is the basis of the lithium component of the lithium-ion battery, comes from salt flats in Chile’s Atacama Desert, according to the U.S. Geologic Survey. But the Saudi Arabia of lithium lies across the border in Bolivia on the Uyuni Salt Flats.

Bolivia, one of the poorest countries in South America, has never developed a lithium production capacity. It hopes to benefit from what many analysts believe is a coming worldwide boom in automotive electric batteries, driven by the development of electric cars. If the boom occurs, it will require lithium far beyond the resources of the Chilean desert, according to expert analysts.

Bolivia is counting on that lithium boom for its economic health. President Evo Morales, a populist and socialist who is allied with Venezuela’s Hugo Chavez, says, “Lithium is the hope not only for Bolivia but for all the people of the planet.”

That hyperbolic hope, Morales has insisted, will be a resource developed by the Bolivian government, not by private industry. To accomplish that, Morales will need to raise nearly $1 billion in capital to develop a lithium mining infrastructure that does not yet exist. It isn’t clear who will put up those needed bucks.

Will the socialist Morales be able to convince private investors that the risks of investing in a state-owned lithium industry, combined with the market risks of electric cars, are acceptable? Not an easy sale. It will require Bolivia to offer returns commensurate with the risks.

Can Bolivia float bonds on the international market to finance the lithium play? Unlikely, according to international finance experts talking to MANAGING POWER on background. They cite the track record of many South American countries in repaying international infrastructure debt. “I’d rather burn the money for heat in my wood stove,” said one investment manager.

If Bolivia is unable to exploit its lithium resources, and the market for lithium carbonate tightens, that will drive up the costs of the already-expensive lithium-ion batteries, used extensively in laptop computers and cell phones, and the only choice today for electric vehicle propulsion. Electric cars, where the buyer’s price tag (probably in the range of $40,000 per car) is largely driven by the battery cost, may again stagnate in a consumer-driven market. Large government subsidies—maybe $10,000 per vehicle in state and federal tax breaks—could reduce the final cost to a range that meets the market demands for new cars, according to automotive analysts.

—Kennedy Maize is the executive editor of MANAGING POWER magazine.