Germany’s E.ON this August began construction of a new pilot plant in Falkenhagen in northeast Germany that will convert excess wind energy into synthetic natural gas that can then be fed into the regional gas grid, where it can be used to produce heat and power.

The technology is not new. In 2010, German researchers at the Center for Solar Energy and Hydrogen Research Baden-Württemberg, in cooperation with the Fraunhofer Institute for Wind Energy and Energy System Technology IWES, announced they had developed what they called a “power-to-gas” process, which essentially employs hydrogen-electrolysis with methanization. It involves splitting water using surplus renewable energy to create hydrogen and oxygen. A chemical reaction of hydrogen with carbon dioxide generates methane—or synthetic natural gas (Figure 3). The researchers then built a 25-kW pilot plant in Stuttgart, supported by Austrian company SolarFuel. A second 250-kW research facility is now in the works, scheduled for completion this year.

The technology seems to have made major strides since the first pilot. SolarFuel is currently working on a project that will see the construction of an industrial pilot facility in Werlte near Oldenburg for the production of renewable gas (or e-gas) for use in Audi vehicles. If all goes as planned and the facility begins operating in the third quarter of 2013, power from four 3.6-MW offshore wind turbines will be sourced to produce around 4,000 cubic meters of renewable methane for a connected load of 6.3 MW, fueling 1,500 turbo-compressed natural gas (TCNG) Audi A3 vehicles for a year. Audi plans to begin serial production of this vehicle type next year.

Meanwhile, E.ON is just one of a dozen parties interested in the technology. European firm ENERTAG has also gotten into the game, partnering with Swedish utility Vattenfall and other companies to build a 6-MW hybrid power station that transforms wind energy into hydrogen in Prenzlau. After converting excess wind energy to hydrogen, the plant uses that hydrogen and biogas to generate power and heat.

But E.ON’s project is unique in that it involves methanization and is of a larger scale, consisting of a 2-MW storage facility (over a 24-hour period, the facility will store about 30 MWh of energy). The hydrogen gas produced from the Falkenhagen plant at a rate of 360 cubic meters per hour will be injected into the regional natural gas pipeline, making the natural gas pipeline network a storage system for surplus electrical power generated from renewable resources.

The project involves a turnkey contract awarded to Canadian company Hydrogenics Corp., which means that firm will supply, install, connect, and commission most components of the hydrogen production facility, including gas compression and master controls, and ready it for operation—scheduled for 2013.

In a larger context, the technology had been lauded as showing tremendous promise—particularly in Germany, because it is well-suited to the country’s infrastructure. Germany reportedly has a natural gas storage reservoir equivalent to more than 200 TWh. Integration into the infrastructure is simple, developers say: The natural gas substitute can be stored like conventional natural gas in the supply network, pipelines, and storage systems in order to fuel natural gas cars or fire natural gas heating systems. 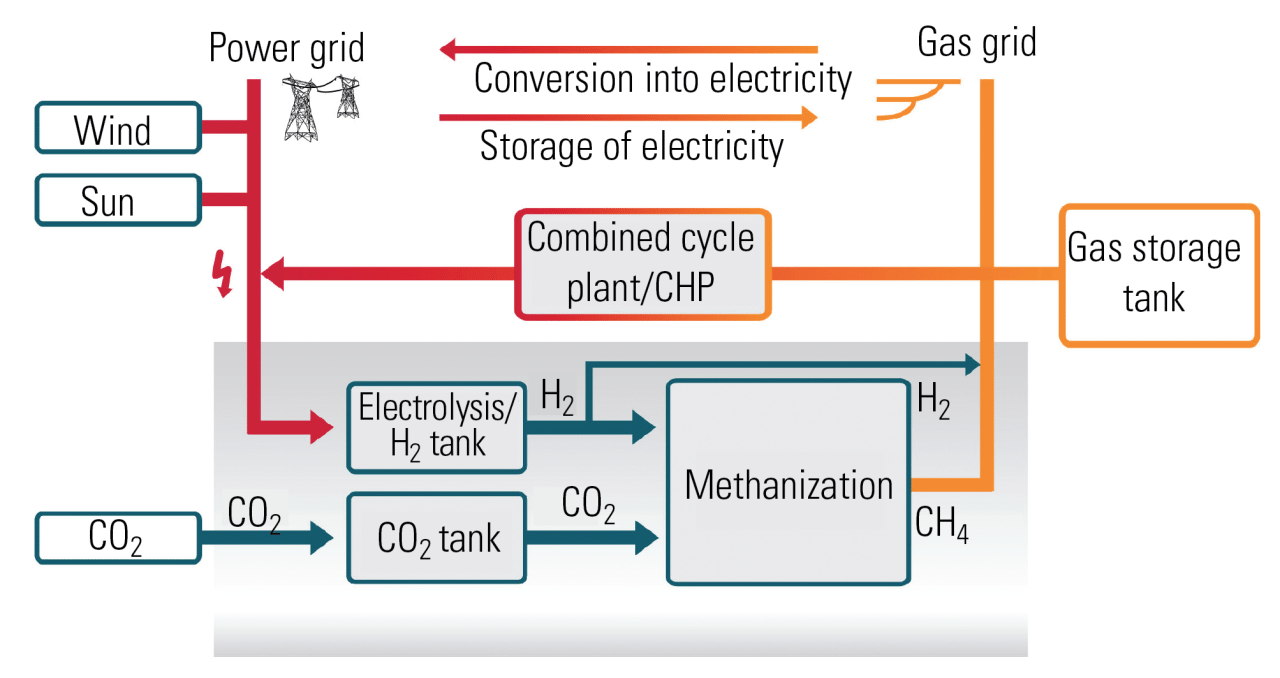 The approach, which is still relatively new and expensive, is strongly being promoted by Germany’s federal power and gas agency, the Bundesnetzagentur, which in November 2011 held a conference to discuss new developments in the field. Matthias Kurth, president of the Bundesnetzagentur, has said that it could also prove invaluable to Germany in light of the nation’s change of direction in energy policy towards a renewable future. “In addition to grid expansion and intelligent load and generation management, considerably more storage capacity will in fact be required to balance fluctuations in solar and wind power generation. Pumped-storage power stations are a good solution for short-term load balancing, but there is only limited capacity available in Germany. Long-term storage is therefore a major challenge when it comes to transforming the energy supply system,” he said.