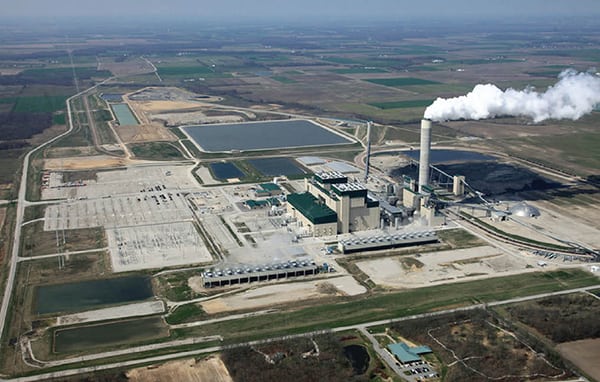 The 1,600-MW Prairie State Energy Campus uses the latest coal technology to burn Illinois coal from the Lively Grove mine, located adjacent to the plant. In planning since 2001, the second unit of the two-unit, $4.93 billion plant entered commercial service in November 2012, thus completing the largest coal-fired plant built in the U.S. in 30 years.

The Prairie State Energy Campus (PSEC) is likely the last of the multi-unit coal-fired power plants that will be built in the U.S. in the foreseeable future. The most recently commissioned coal plants (SWEPCO’s 600-MW John W. Turk, Jr. and Duke Energy’s 825-MW Cliffside Unit 6) are single-unit plants with no firm plans for future expansion. The last two-unit coal-fired plants completed as a single project were Luminant’s Oak Grove power plant (2 x 800 MW) and We Energies’ Elm Road plant (2 x 615), both completed in 2010, but that’s where the similarity ends.

Peabody Energy Corp., the world’s largest private-sector coal company, originally conceived the development plan for PSEC in the early 2000s. The plan called for strategically locating a power plant adjacent to its Illinois Basin coal reserves as a means to ensure future fuel supplies and to minimize the impact on rates caused by market price fluctuations of delivered coal, including transportation. Electricity customers benefit from steady, affordable rates for decades to come because the project also secured more than 30 years of coal reserves located adjacent to PSEC.

PSEC is located on a 1,200-acre site that includes both Prairie State’s Lively Grove underground mine and the power plant. The mine-mouth plant, located about 50 miles southeast of St. Louis, consumes ~7 million tons per year of Illinois Basin coal.

Construction of the $4.93 billion plant began in May 2007 with site preparation following several years of lawsuits and legal challenges related to the plant’s air permit that were finally resolved in favor of PSEC. Purchase contracts for the steam generators, steam turbines, and air quality control equipment were concluded in June-July 2007. The underground coal mine was operational in 2010. Unit 1 went online on June 6, 2012, followed by Unit 2 on Nov. 3, 2012.

PSEC consists of two supercritical coal-fired steam generators manufactured by The Babcock & Wilcox Co. Each steam generator delivers main steam at ~3,800 psia and 1,055F at the superheater and reheater outlets. The steam generators are sliding pressure, balanced draft units with spiral-wound furnace wall construction. The tube materials were selected to accommodate the use of high-sulfur Illinois Basin coals. The state-of-the art emissions controls were designed and furnished by Siemens Power Generation Inc. to remove 98% of SO2, 90% NOx, and more than 99% of particulate matter, the most common emissions. PSEC takes native Illinois coal that contains more than 9 pounds of SO2 per million Btu and reduces emissions to just 0.182 pounds of SO2 per million Btu. This results in emissions that are less than one-fifth the national average for existing coal-fueled plants.

Toshiba International Corp. supplied the steam turbine-generators, nominally rated at 877 MW at an exhaust pressure of 3.0 inches of mercury. Each steam turbine is a 3,600-rpm, extraction condensing, reheat type unit with eight stages of steam extraction for feedwater heating and feedwater pump supply. The electric generators are rated at 1,020 kVA and are direct-driven, two-pole, hydrogen-cooled machines with secondary water cooling.

Steam turbine exhaust steam is condensed in a two-shell, single-pressure, water-cooled surface condenser with stainless steel tubes. Cooling water is circulated through the condensers and cooled by mechanical draft cooling towers. The circulating water system for each unit uses three 33%-capacity circulating water pumps, and one auxiliary 100%-capacity cooling water pump. Makeup water is supplied from the Kaskaskia River located about 15 miles west of the plant. A storage pond has an on-site 30-day backup water supply.

Coal from the mine is conveyed to PSEC and placed on the coal storage pile at a rate of 2,600 tons per hour via conveyor system. In the normal course of business, sufficient coal to operate the plant for 24 hours is delivered to the plant in 10 hours. Coal is reclaimed from the coal pile at 2,600 tons per hour to surge hoppers located near each steam generator. The active coal pile holds approximately 10 days of fuel under normal operating conditions. Space on the plant site has also been allocated for an inactive coal pile that can store fuel for up to 60 days under full-load operation. Rail service to the plant was configured so that external supplies of coal, of a quality specified in the plant’s air permit, could be procured should there be an extended disruption in coal deliveries from the mine.

Bottom and fly ash from the boiler and air quality control systems are collected and combined with the wastes produced by the flue gas desulfurization systems and conveyed to the coal combustion residuals (CCRs) storage area. Wastewater produced by the plant, such as boiler and cooling tower blowdown, is reused in the ash-handling and flue gas desulfurization systems. Rail service is also used for delivery of limestone and disposal of CCRs. PSEC disposes its CCRs in the newly constructed Near Field, a monofill built to Illinois Environmental Protection Agency standards that sits directly adjacent to the power plant. CCRs are transported to Near Field via conveyor, further reducing the need for rail transportation. PSGC also maintains Jordan Grove, a fully lined and managed monofill 12 miles south of the campus.

PSEC, like any controversial power generation project, experienced delays caused by permitting legal challenges and construction delays. Bechtel Power Corp. and Prairie State Generating Co., LLC originally entered into a time and material engineering-procurement-construction (EPC) agreement with a targeted completion date, price, and other performance requirements. In July 2010, a revised and amended EPC agreement with a guaranteed completion schedule was reached that fixed the total cost of the project to PSEC at $3.999 billion, not including the cost of the mine development. According to Fitch, the rating agency for a majority of the ownership group, the additional project cost was mitigated by the additional protection provided by the amended construction contract.

The project cost is certainly higher than originally envisaged in the early 2000s for a coal plant of this magnitude but still much cheaper than for integrated gasification combined cycle—the only other option for combusting the available Illinois Basin coal—whose U.S. projects now under construction have experienced massive cost overruns and missed schedules.

However, now that the plant is operational, plant owners are enjoying reliable electricity with little fuel price risk for the next 30 years. In addition, ownership of the asset decreases each owner’s exposure to the unpredictable electricity spot market and to rising prices for long-term bulk power purchases.

The ownership group is taking the long view its investment—the price of natural gas, coal, and the cost to transport coal will steadily rise into the future while PSEC’s costs are under the owner’s control, unlike most plants. I expect the owners’ investment in PSEC will pay handsome dividends for many years to come.

Both units have been performance tested and each unit is now being dispatched at higher than its nameplate capability: Unit 1 at 812 MW and Unit 2 in excess of 809 MW. The tested net plant heat rate was reported by PSEC as ~1% better than guarantee. ■