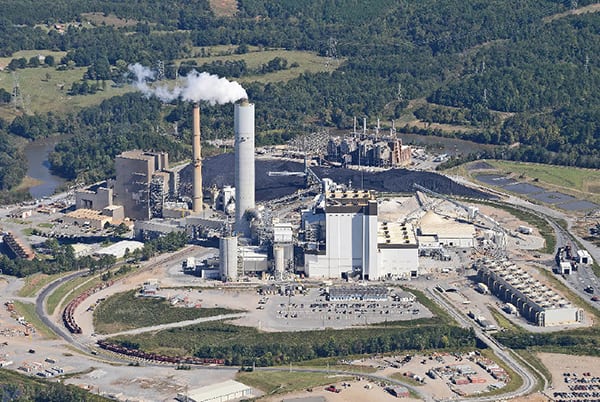 With a mandate to cut emissions, improve efficiency, and increase output, Duke set out to replace the four World War II–era units at Cliffside Steam Station with a modern, state-of-the-art supercritical plant. The result was one of the cleanest, most efficient coal plants in the country, with twice the output and half the emissions of its predecessor.

One of its first fossil fuel plants was the Cliffside Steam Station, which broke ground in January 1939. Its first 80-MW unit came online the following July. The new plant was located along the Broad River about 50 miles east of Charlotte, with the intent of taking advantage of its proximity to the Appalachian coal fields to power North Carolina’s growing textile industry. Three more units, ultimately totaling 198 MW, came online during the 1940s. Unit 5, located about half a mile from the original four-unit building, was completed in 1972 and added 556 MW to the plant’s capacity.

But by the 2000s, it had become clear that the oldest units were reaching the end of their useful life, and the Cliffside station would be unable to meet rapidly growing electricity demand in the area, while complying with increasingly stringent state and federal emissions regulations, without a major upgrade. In mid-2006, Duke filed an application with the North Carolina Utilities Commission to retire and replace Units 1 through 4. Though Duke had originally hoped to add two 800-MW supercritical units to the site, the commission ultimately approved only one of them in early 2007.

The Shaw Group was selected build the plant. Duke and Shaw created an integrated team to address design, specifications, and pricing for the project, instead of using a fixed-price engineering, procurement, and construction contract. Permission to begin construction was issued in January 2008, and ground was broken shortly afterward. The permit included an additional project installing a wet flue gas desulfurizer (WFGD) on Unit 5.

Although the air permit issued by the state included a first-of-its-kind carbon mitigation plan, the proposal to build a large new coal plant on the site sparked strenuous opposition from area environmental groups. Plant opponents were concerned primarily about mercury emissions from the new Unit 6, even though replacing the old units would result in a dramatic net reduction. Much of the dispute centered around what emissions levels were mandated under the Clean Air Act and state regulations, a determination that was complicated by the Environmental Protection Agency’s delay in finalizing Maximum Available Control Technology rules for new plants.

Opponents were unsuccessful in stopping the project despite a series of lawsuits and administrative actions, as well as sporadic episodes of civil disobedience. Duke agreed in a settlement reached in early 2012 that it would retire 1,667 MW of coal-fired capacity and tighten pollution controls at Cliffside. Although Duke had already publicly declared its intention to retire the plants, the settlement made the plans legally binding.

Workforce levels peaked in excess of 2,000 skilled workers on site, and over 15 million hours were expended to complete the overall Cliffside modernization effort. Despite its size and complexity, the five-year project was completed with no serious accidents. Shaw Group received the prestigious Building Star award from the North Carolina Department of Labor, recognizing its efforts to establish and maintain a safe work environment.

The size of the project necessitated rerouting nearby state highway 221A and constructing a new railroad bridge in order to eliminate an at-grade railroad crossing. Duke completed this phase for the state at its cost.

The new Unit 6 boiler is a spiral-wound, wall-fired, sliding pressure supercritical steam generator supplied by Hitachi Power Systems America that is capable of burning a range of coals from bituminous to a 50-50 blend of bituminous and subbituminous, and can supply up to 6 million pounds of steam per hour. The Toshiba tandem compound four-flow supercritical steam turbine generator is capable of various operating conditions (Figure 1). The cycle achieves its very high efficiency in part due to the supercritical steam conditions, with 3,992 psi/1,055F main steam and 678 psi/1,075F reheat steam. These are among the highest operating conditions in North America and make Unit 6 23% more efficient than the units it replaced.

The plant also includes advanced air quality control systems. The Alstom-supplied arrangement is an innovative combination of proven technologies that include a spray dryer absorber (SDA), fabric filter baghouse, and a wet flue gas desulfurizer. The system removes 99.9% of fly ash, 99% of SOx, and 90% of mercury to meet particulate emission limits for coals having up to 27% ash. Finally, Unit 6 was specifically built to accommodate future carbon-control technologies when they become available.

Combined with the new emissions controls on Unit 5, the modernized Cliffside Steam Station will produce over twice the electricity as compared with the original Units 1 to 5 while reducing SOx emissions by 80%, NOx by 50%, and mercury by 50%. Units 5 and 6 now share a common stack.

The new plant is efficient in other ways. Unit 6, and specifically the AQCS, was designed to reuse and recycle resources as much as is practicable. While the old plant had relied on the Broad River for cooling, the new plant utilizes closed-loop cooling towers. That change reduces withdrawals from the river by almost 90%. Cooling tower blowdown is used as makeup for the WFGD, and the WFGD purge stream is used as makeup for the SDA. Finally, the combustion and WFGD by-products are recycled for use in the construction industry.

Because of the clean, efficient design of Unit 6, Duke received a $125 million Advanced Coal Project tax credit from the Department of Energy.

The control systems for Unit 6 are as advanced as the power systems. Duke developed and implemented a digital monitoring and control strategy that integrated the operator human machine interface within an Emerson Ovation digital control system (DCS), eliminating almost all proprietary/standalone/third-party controllers. Bus technologies—in particular, Foundation Fieldbus in analog control loops—were utilized to greatly reduce the quantity of hardwired instrumentation and control cabling and terminations.

Duke partnered with Emerson and Schweitzer Engineering Laboratories to pilot a first-of-a-kind direct memory access interface between the DCS and smart protective relays in all switchgear. This allowed reliable DCS control and monitoring of digital control loops with essentially no hardwired cabling or terminations required.

The $1.8 billion project was brought in on budget, and Unit 6 entered commercial operation on Dec. 30, 2012. Emissions and performance testing were completed during the fourth quarter of 2012 and the first quarter of 2013.

“Completing this unit advances Duke Energy’s fleet modernization by allowing us to retire older, less efficient units both at this site and at other locations in North Carolina,” said Charlie Gates, Duke’s senior vice president of Power Generation Operations.

The contractual acceptance test demonstrated that Unit 6 achieved a heat rate of 8,890 Btu/kWh net, among the best in the country, while meeting the very stringent air permit emission limits. The excellent heat rate is attributed to low auxiliary loads and the extremely efficient supercritical boiler and supercritical steam turbine generator.

“Cliffside Unit 6 has one of the most stringent air quality permits in the country, and our emissions testing program has demonstrated that these sophisticated controls are performing very well,” Gates said. “This unit also has the flexibility to burn a wide range of coals with superior emissions removal, which allows us to purchase cost-effective coals and provide additional savings to customers while improving air quality.”

Going forward, Units 5 and 6 are expected to consume more than 4 million tons of coal a year. The plant can stockpile 450,000 tons on site. Units 1–4 were officially retired in October 2011. ■