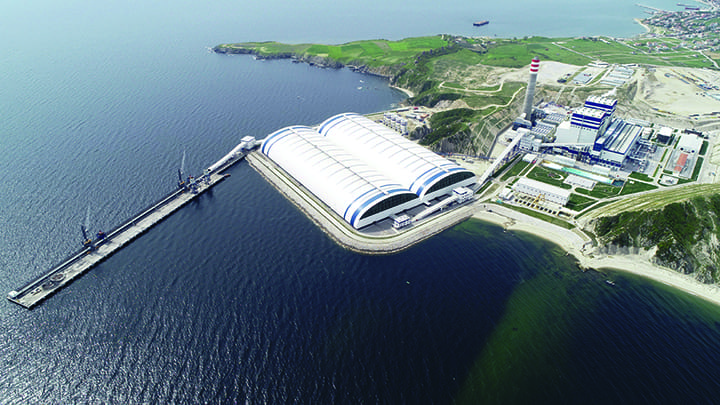 The CENAL TES, or Karabiga, power plant in Turkey is a model for the use of high-performance technology and digital software to power an ultrasupercritical coal-fired facility.

Coal continues to be the primary source of power generation in Turkey, even as renewable power increases its market share. The country considers coal a critical source of reliable baseload power, and officials recognize the need to ensure the nation’s coal plants operate with high efficiency, flexibility, and with limited environmental impact.

The two-unit, 1,320-MW plant entered commercial operation in 2017, with Unit 1 coming online in November, and Unit 2 in December. Construction began in March 2013.

Karabiga is notable for several reasons, including its state-of-the-art technology, reduced emissions profile, and status as one of the world’s most-efficient coal plants. It’s also the recipient of a POWER Top Plant award for coal-fired generation.

“Today in Turkey, around 33% of electricity is generated from coal,” Ihsan Acar, the plant manager, told POWER. “With the country’s push to increase renewable energy use, coal serves as a source of reliable baseload power to stabilize the grid. Operating with high efficiency and flexibility, Karabiga SPP offers the country a way to diversify its energy mix at a competitive cost of electricity with reduced impact on the environment.”

“As the first and most efficient ultrasupercritical coal-fired power plant in Turkey and one of the best all over the world, Karabiga is equipped with state-of-the art technology,” Acar told POWER. He said that technology includes “2 x 660-MW USC boilers, steam turbines, generators, and air quality control systems meeting high-performance guarantees from GE. This high-performance integrated power package combined with GE’s digitally enabled services enables us to operate Karabiga with high efficiency, reliability, and also increased flexibility to support the integration of more renewable energy to the grid.”

The plant’s notable technology also includes the Magaldi Ash Cooler (MAC), a system for dry extraction, air cooling, and mechanical handling of bottom ash from pulverized coal-fired boilers. According to Magaldi, “In the MAC system, ash cooling is carried out by ambient air, naturally drawn into the system by the negative pressure of the furnace. That air recovers a significant amount of energy in the form of ash sensible heat, ash chemical energy from unburnt particles, and boiler radiation flux through the throat.”

Karabiga was designed to accommodate a diverse range of imported coal from various sources, specifically high-quality-calorific, low-ash, and low-sulfur coal. The plant has to meet not only local Turkish and international pollution rules, but also stringent European Union emission standards.

The ultrasupercritical steam generation process operates above supercritical pressures and at advanced steam temperatures to improve plant efficiency compared to conventional coal-fired power stations, helping reduce feedstock costs and carbon emissions. The plant utilizes its coastal location for seawater cooling. Hatch, a global company that works with the energy industry on environmental solutions, and served as the plant owner’s engineer at Karabiga, said the efficiency of the plant’s ultrasupercritical boilers saves 200,000 tons of coal each year compared to subcritical coal plants.

Parneix told POWER that GE in December 2019 signed a 12-year services agreement with CENAL for the Karabiga plant. “Under this multi-year service agreement, GE will plan and manage scheduled inspections of the boilers, steam turbines, generators, and turbine automation and controls, as well as provide parts and repairs as required,” Parneix said. “These services will be complemented and enhanced by GE’s digital applications to help CENAL operate the plant more reliably through proactive maintenance and achieve better operational flexibility and performance at a sustainable environmental footprint.”

He continued: “By monitoring and analyzing data from more than 10,000 sensor inputs across a typical steam power plant, GE’s digital steam offerings can help plant operators make smarter decisions about how to optimally run their power plants for better performance and increased operating flexibility at lower cost and a sustainable environmental footprint. Coupled with the expertise of the operator and GE Steam Power’s extended experience in servicing steam power plants worldwide, these digital solutions can help increase plant efficiency and flexibility, reduce stack-emissions and achieve less unplanned downtime over the plant’s lifetime.”

GE’s digital power plant software in use at Karabiga includes Risk Based Inspection (RBI), and Remote Monitoring and Diagnostics (M&D). RBI uses the mega dataset generated by the plant’s sensors to identify and understand risk, risk drivers, and the lifecycle stage of the most critical assets. It provides prognostic information that supports an optimized scheduling of outages, upgrades, and inspections under various operating scenarios by using digital twins of the monitored equipment. By predicting the behavior and integrity of the monitored equipment, and evaluating risk, the plant can proactively prevent forced outages, and also reduce unnecessary maintenance and downtime. 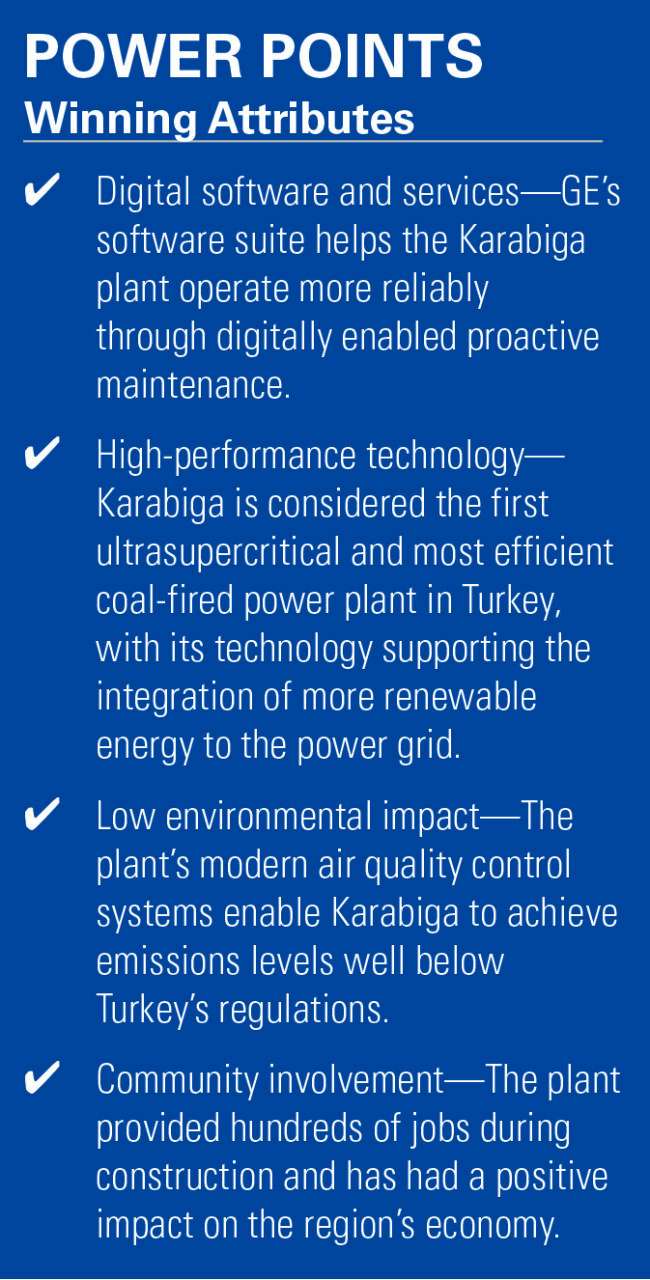 The plant also utilizes GE’s Generator Health Monitoring (GHM), an integrated modular online monitoring suite. The GHM allows continuous monitoring and condition assessment of critical components of the turbo-generator for early identification of any issue that has a potential to cause plant shutdowns. The data flows to the local user interface and the GE M&D center, where that data is analyzed, to provide early detection and identification of potential problems related to faults in the windings, shafts, and bearings.

The Valve and Actuator Monitoring System in use at the plant provides real-time monitoring of the major failure modes of steam turbine inlet valves and actuators for early fault detection. This system supports changes in the operation of steam power plants, which today are used more and more at a varying load to compensate for the intermittency of renewable power on the grid. Because of that, steam valves have a higher risk of failure as they are now continuously controlled, whereas formerly they would be periodically changed between fully closed and full-open positions only.

The Boiler Optimizer, or BoilerOpt, software provides operators with enhanced guidance and supervisory control on how to adapt to the changing characteristics of the various coals used at the plant, while keeping an efficient operation of the boiler across the load range. It increases the boiler efficiency and can reduce NOx emissions over time, and achieves better control over steam temperatures, reducing the occurrence of tube failures.

As part of BoilerOpt, the Combustion Optimizer module continuously monitors the level of excess air in the furnace, and adjusts dampers, burner tilts, over-fire air, and other controllable parameters to minimize it. It can learn complex process relationships, dynamically determine the optimal fuel and air setpoints for the units’ goals and constraints, and direct the control system to make the necessary adjustments in real-time.

The Soot Cleaning Optimizer (SCO), also part of BoilerOpt, monitors the cleanliness of the surfaces in the various zones of the boiler. When it determines an area is not optimally clean, it activates the best soot-cleaning device when and where it is needed. This SCO balances boiler cleaning actions to reduce boiler tube erosion and excessive thermal shocking, while improving steam temperatures and sprays, and minimizing fouling, plugging, and slagging events.

Muzaffer Karatas, the mayor of Karabiga, in a 2019 interview with news channel NTV Kenya, acknowledged there was opposition to the plant from some in the local community both prior to and during its construction, but noted the facility’s positive economic impact on the region.

“Before the construction of the power plant, people were leaving Karabiga because there was not much to do in the town,” Karatas said. “But since the construction, the town is developing and a lot of new houses are being built. We cannot convince everybody, there are always people who are against this, but for the sake of the larger community in Karabiga we believe it was in the interest of the town and the community.” ■