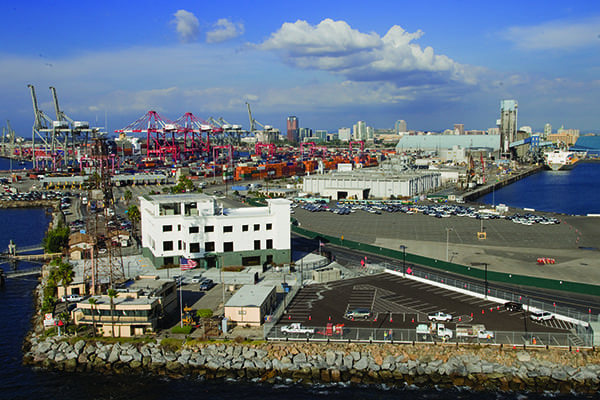 A new microgrid in California, at the nation’s second-busiest seaport, takes an innovative approach to providing reliable, resilient, and sustainable power, providing a glimpse at the future of such installations at commercial and industrial sites.

The Port of Long Beach (POLB) is among the busiest seaports in the U.S. It’s among the top 10 in terms of annual cargo volume in North America, and the second-busiest container seaport in the nation, handling more than 8 million container units in 2018, the most-active year in its history.

The port is an organization that considers itself “a trailblazer in innovative goods movement, safety, environmental stewardship and sustainability.” That’s no small task. The port sits on 3,200 acres, with 31 miles of waterfront. It has 10 piers, 62 berths, and 68 post-Panamax gantry cranes. Its annual trade is valued at more than $200 billion, and it supports more than 575,000 jobs in Southern California. 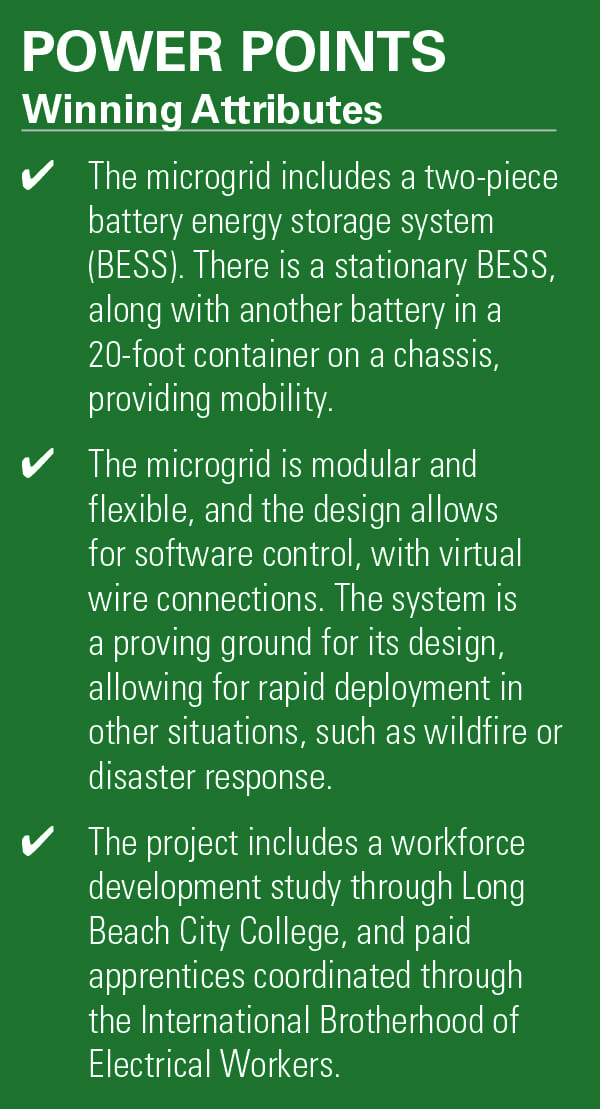 The port’s five-member Board of Harbor Commissioners, along with executive director Mario Cordero, is pushing Long Beach toward a cleaner energy future. This decade, the Port has pursued a $4 billion capital improvement program to accommodate larger ships, create more jobs, and make the site one of the world’s most-sustainable marine facilities.

All those goals require a stable supply of energy. “Marine terminals make money by moving cargo off ships and to customers as quickly as possible. They run two shifts and labor is paid whether they are working or not,” said Christine Houston, manager of sustainable practices for the port, in a recent interview with POWER, noting that downtime can mean millions of lost dollars. Houston said a steady supply of power is critical for the POLB. The port’s terminals are increasingly using equipment powered by electricity to move cargo, putting reliability and resiliency of the power supply top of mind.

“Ensuring a stable supply of energy is crucial to the zero-emissions future the Harbor Commission envisions for the Port of Long Beach,” said Tracy Egoscue, president of the Long Beach Board of Harbor Commissioners, in a statement last year when the design, engineering, and construction contract for the new microgrid project was awarded to Schneider Electric.

When the California Energy Commission (CEC) provided a $5 million grant to POLB, Houston and the City of Long Beach Harbor Department wanted to ensure it was well-spent. The new microgrid is designed to increase energy resilience through islanding and distributed energy resource (DER) integration, a system that will allow the port’s critical safety and security facility to operate without interruption.

The goal of the CEC’s grant, which comes from California’s Electric Program Investment Charge (EPIC) fund, was to accelerate development and commercialization of microgrids, as a way to isolate from the power grid and improve participation in utility demand response programs, helping balance energy demand during peak periods.

Schneider Electric’s $5.2 million contract with POLB is part of a $7.2 million project partly funded by the CEC grant. It includes a solar carport, energy storage systems, and advanced system management controls at the port’s security headquarters, the Joint Command and Control Center, a site that is used for all critical safety and surveillance functions, as well as the incident command center during emergencies and natural disasters. It’s a complex project worthy of POWER’s Commercial & Industrial Generation award.

“We are spending $5 million of someone else’s money,” said Houston, noting the EPIC fund is supported by a charge on California power customers’ bills, “so we have to demonstrate that it goes to the benefit of California ratepayers.”

Houston said partnering with Schneider Electric to design the microgrid was a natural fit. “Everywhere you go in the Port of Long Beach, you see Square D labels,” she said, noting the products that are part of Schneider’s line of power solutions. “Our electrical engineer had a relationship with Square D and we knew that the six-week grant application phase was going to be incredibly challenging. It started with me going to the [POLB] board to get permission to apply for the [CEC] grant. We won the award, and then it was a matter of going to the board to get a signed contract. Part of that was a commitment to using all union labor, and paying for apprentices.”

Mark Feasel, vice president for the electric utility segment and smart grid for Schneider Electric, told POWER, “We’ve certainly done a lot of work at seaports around the world. Most of it is ship-to-shore power, facilitating the shutdown of the ship’s auxiliary engines so they’re not coming in and burning fuels at berth.”

Feasel said the project presented an opportunity to design a complex microgrid offering modularity and flexibility. The project includes using students from the University of California, Irvine’s Advanced Power and Energy Program to compile and analyze 12 months of performance data, making it available to other seaports in the state.

Feasel also said “working with a sophisticated partner in the project” was key to its success. “The port is very much an organization with a deep competence in complicated systems and projects. It was a no-brainer for us to take it on,” he said. “We were investing a lot of resources, they were investing a lot of resources. It was never a question about working with them.”

As for the project’s complexity? Just another challenge.

“There are a lot of things at risk, but when you’re working with the right people you can go out on that ledge. We felt good about that process,” Feasel said.

An important element of the POLB microgrid is its inclusion of both stationary and mobile battery storage.

“We had this idea to split the BESS into two pieces,” said Feasel. “We have a DC BESS that is stationary, and we mounted another battery in a 20-foot container on a chassis. The BESS is connected to our whole power system to provide peak shaving. And it allows for a whole array of connections. It can serve refrigerated containers that might be stranded on a marine terminal without power. It can serve a sewer pump station. And it’s also something that could be used in wildfire response, potentially providing clean, quiet power to a community shelter or even gasoline dispensers during an outage.”

The modular design is a concept being used more often in power installations to provide scalability and simplify installation.

“The modularity and flexibility are key,” said Feasel. “Most microgrids are stationary in nature, not designed to be modular or flexible. [The POLB microgrid’s] design allows you to take that physical layer and make it more modular. We’re able to virtually connect the wires instead of physically. It’s like keeping a heartbeat, or pulse, of everything. The controls in place on the software provide a cyber-approved version of what you’re running. You can authentically verify I’m talking to you… it provides a higher degree of certainty.”

As noted earlier, Feasel said the microgrid’s design was in part done with an eye toward disaster response situations—in the case of California, perhaps restoring power to areas hit by wildfires. “We don’t have to redo quality controls,” he said, thanks to the testing at Long Beach. “We already have the testing done, so we can go in with a higher degree of security and accuracy” about what the system can do.

Performance data will be available to other seaports in the state, as well as other organizations or institutions that might have a similar need for resilience, cost savings, and grid services. Houston noted the excitement at Long Beach surrounding the project.

“It’s really the whole thing,” she said. “We haven’t made a microgrid before.” She said winning the grant money from the state was particularly gratifying for her and her port sustainability section.

“Our engineers would never find time to write an application for grant money,” she said, “but for me, to be able to bring something that we’ve never done, that makes us a better organization for knowing something new. Something that will enable us to become the zero-emissions seaport of the future.” ■