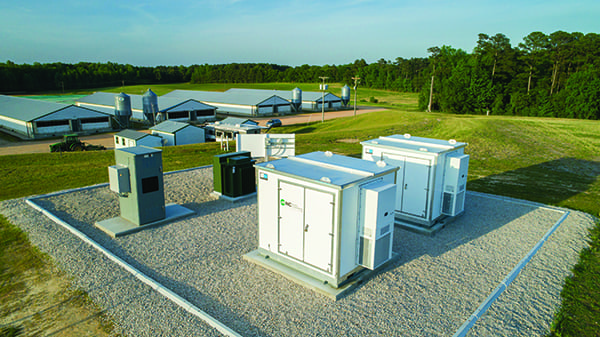 Power from pig manure is not a public relations stunt, but rather, it’s an innovative solution to several farm challenges. Installing lagoon covers not only reduces odors and eliminates rainwater ingress, but it also allows biogas to be captured and utilized as a renewable energy resource.

The power industry is frequently blasted for the amount of greenhouse gases (GHGs) it emits, but what often goes overlooked is how much CO2, nitrous oxide, and methane the agricultural sector produces. According to the U.S. Environmental Protection Agency’s Inventory of U.S. Greenhouse Gas Emissions and Sinks, the U.S. agriculture industry released 582.18 million metric tons of CO2 equivalents in 2017. That was about one-third of the total emitted by the nation’s fossil-fueled electricity generation sector that year, and U.S. farmers don’t typically burn coal, except in their barbecue grills.

So, where are all those agricultural GHGs coming from? Well, according to an article written by Eugene Takle, professor of atmospheric science and professor of agricultural meteorology at Iowa State University (ISU), and Don Hofstrand, retired ISU extension value-added agriculture specialist, a majority of ag-related GHG emissions (about 61%) come from nitrous oxide produced naturally in soils through the microbial processes of nitrification and de-nitrification. 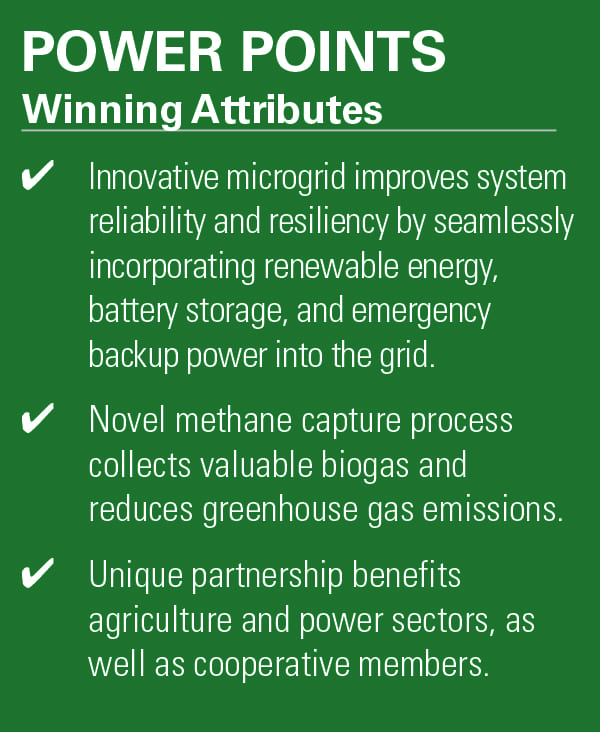 Enteric fermentation, that is, methane produced as part of the normal digestive processes in animals, especially ruminant animals such as cattle, is next on the list (18%). Those gases are exhaled or belched to the atmosphere by animals.

Coming in third on the ag list is manure management, which accounts for 9% of the total GHG emissions. “When manure is handled as a solid or deposited naturally on grassland, it decomposes aerobically (with oxygen) and creates little methane emissions. However, manure stored as a liquid or slurry in lagoons, ponds, tanks or pits, decomposes anaerobically and creates methane emissions,” the ISU authors wrote. Swine and dairy cattle are the two largest contributors to those emissions.

Butler Farms is a sustainability-focused hog farm located in rural Lillington, North Carolina. The farm is a finishing operation, which means young feeder pigs are brought in and fed for about 20 weeks until they are ready for market. Butler Farms’ 10 pig barns house a total of about 8,000 hogs during the process.

And with pigs comes manure. In fact, when the barns are full, about 10,000 gallons of manure are produced every day. The pee and poop drains through slots in the barn floors to collecting tanks below. At regular intervals, the collecting tanks are drained to a digester and two lagoons.

Desperately looking for ways to lessen the farm’s impact on neighbors and the environment, owner Tom Butler installed covers over the roughly four-acre lagoon area in 2008. “We were concerned mostly about hog farm odor, but we were slowly learning more about greenhouse gas emissions, ammonia, and air quality issues, and last but not least, the detrimental effects that could be caused by our long-term use of the spray field system we were using to utilize our liquid waste,” Butler told POWER.

The lagoon covers—made of two-inch thick material—eliminate about 85% of swine farm odors, while also preventing rainwater from entering basins, which reduces the liquid-waste burden. Another important benefit that lagoon covers offer, however, is the ability to capture anaerobically produced methane, also known as biogas, for use as a power generation fuel, rather than allowing the GHG to go directly into the atmosphere.

To accelerate and optimize the process, the 18-foot deep, 1,000,000-gallon digester is heated to about 100F. Most of the methane is released after about three weeks, and the sludge is drained into the two larger overflow lagoons.

Butler Farms has a 180-kW biogas-fueled gen-set, which generates more electricity than the farm needs. Therefore, it entered into a power purchase agreement to sell the renewable energy to South River Electric Membership Corp. (South River EMC), its power provider. Meanwhile, the farm installed a 20-kW solar panel array and sells solar power back to South River EMC. It also has a 100-kW standby diesel generator, which can supply full system backup when needed.

In 2017, Butler Farms decided to go even further down the sustainability path, and opted to blend its existing biogas and power generation systems into a new microgrid in partnership with North Carolina’s electric cooperatives. The cooperatives had already developed a microgrid on Ocracoke Island on the state’s Outer Banks and were seeking to continue developing new energy solutions for cooperative members. South River EMC saw an opportunity to expand the capabilities at Butler Farms and approached its power supplier, North Carolina Electric Membership Corp. (NCEMC), about creating a microgrid on-site. In addition to the existing equipment, NCEMC placed a 250-kW/735-kWh battery storage system and control technology to make it all work.

“The microgrid that offered battery storage was a perfect fit to our system,” Butler said.

Engineers from South River EMC and NCEMC held design discussions, and selected PowerSecure, a Southern Company subsidiary, as the engineering, procurement, and construction contractor. The engineered portion of the project involved three PowerSecure engineers, who designed the system and created the necessary drawings and schematics. PowerSecure manufactured custom enclosures, and packaged and installed the individual components into a fully functioning battery storage system and separate controller. Then a crew of qualified technicians installed and commissioned the turnkey system.

“PowerSecure has a demonstrated history of successfully executing microgrid projects so we rely heavily on these experiences to ensure that we have the appropriately trained team to execute a project,” Jonathan Tugwell, application engineer with PowerSecure, told POWER.

South River EMC provided the interconnection through a 300-kVA, 400-V/12.47-kV transformer, and fiber between the pole mount reclosers and the controller, while NCEMC provided the battery system and controller. Commissioning required collaboration between technicians and engineers at PowerSecure, South River EMC, and NCEMC to successfully meet all the operational performance targets (Figure 1).

The custom controller is a key component of the system and is used to provide backup generation during anticipated and unanticipated islanding events. The controller allows NCEMC to initiate the microgrid and automatically isolate the farm from the larger electric distribution system. There were three reclosers provided as part of the project: a recloser that isolates the farm from the utility, and two reclosers on the utility line to isolate the surrounding area between the reclosers from the utility. NCEMC is also able to dispatch the system during peak energy usage while connected to the grid to explore the potential benefits of using microgrids as a demand response resource.

Being located in North Carolina, the system had to be designed to meet the thermal conditions of a hot summer and cold winter. Batteries have a specific temperature range for operation, so NCEMC requested that PowerSecure design an enclosure that could accommodate the varying environmental conditions without causing issues inside the enclosure or prematurely reducing the life of the batteries. That took a while, but was successfully accomplished.

The project was completed safely, with no on-site incidents. PowerSecure followed the safety program it has successfully implemented across all of its project sites and further leveraged Southern Company’s number one value—Safety First.

The innovative energy system is a reliable, resilient, and clean source of power for the farm and 28 nearby homes. Chris Spears, executive vice president and CEO of South River EMC, said the microgrid will serve as “a model for the integration of member-owned power generation that benefits the entire cooperative membership” and “a case study for how agriculture and electric utilities—two of North Carolina’s most important industries—can work together to promote sustainability and improve quality of life.”

“We never had any intentions of making a lot of money on these waste management improvements. It was genuinely a desire to do the ‘Green Thing,’ ” Butler said. His example has inspired other farmers to follow suit. He knows of at least two that have made similar changes. ■