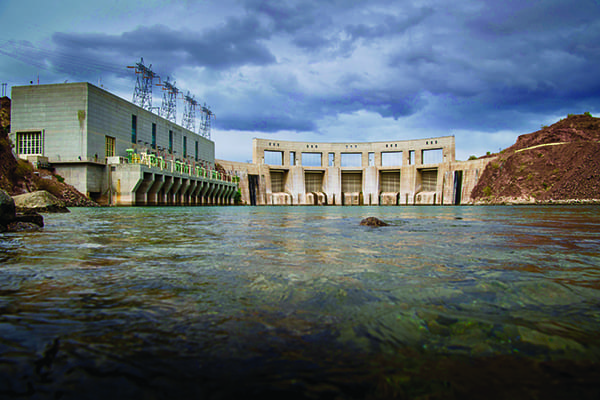 While the creamy-hued, thumbnail-sized quagga mussel may look innocuous, its menace cannot be overstated. A mature female mussel can produce more than one million eggs per year, and in warmer waters of the Western U.S., they can spawn year-round. Eggs develop into microscopic larvae known as “veligers,” which float in the water column and can be easily transported. The damage, however, is by juvenile and adult mussels, which secrete byssal threads—small, thin fibers—and attach themselves to hard surfaces, where they form clusters, in some cases, of huge colonies up to 400 feet deep. 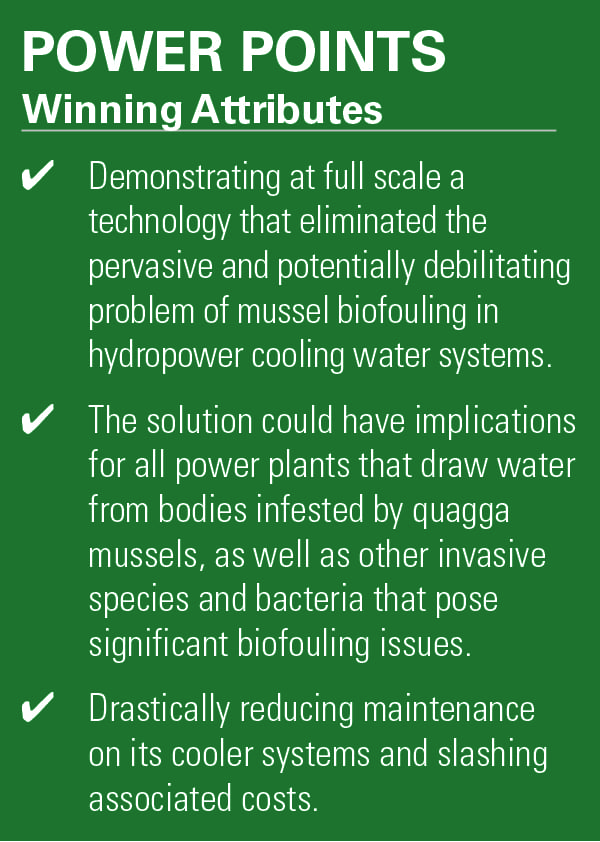 In large numbers, they pose myriad ecological risks—they can devastate aquatic biodiversity and water quality. And because they can attach to and quickly clog up water intake and delivery pipes, and foul dam intake and pipes, and the decay of dead mussels can corrode steel and cast-iron pipelines, they pose substantial economic headaches.

The trouble is that they are spreading uncontrollably, as the Department of the Interior’s (DOI’s) Bureau of Reclamation and other water body governing federal agencies have repeatedly warned over the years. Indigenous to the Ukraine, the small freshwater bivalve mollusks were first observed in New York in 1989, likely introduced by ballast waters from European ships. By 1992, the species that is highly polymorphic—it can rapidly adapt to extreme environmental conditions—had spread to the Great Lakes. And by the late 1990s, they were in major waterways in Wisconsin, Missouri, and Iowa. In 2007, despite desperate, coordinated initiatives by states and the DOI to prevent their spread west of the 100th Meridian, they began rapidly colonizing the Colorado River Basin, infesting Lake Mead, and then Lake Powell, Lake Havasu, Lake Mohave, and other substantial waterbodies that provide integral water and power supplies across Arizona, Nevada, Utah, and California.

Between 1993 and 1999, mussel infestations (both of quagga and zebra) cost the power sector in the Great Lakes region a stunning $3.1 billion. Cause for alarm in the West is more pronounced because warmer waters dramatically ramp up reproduction rates, as Leonard Willett, a water treatment specialist at aquatic invasive species control firm RNT Consulting, told POWER in May. “In the Great Lakes, it took mussels two to three years to start plugging up power plants and cooling water systems, while in the Lower Colorado River, by the end of 2007—less than 12 months after they showed up—our systems were plugged,” he said.

At Parker Dam on Arizona’s Lake Havasu—a warm and nutrient-rich water body that has the largest mussel population in the region—the infestation has quickly morphed beyond a nuisance. The concrete arch structure—the “deepest dam in the world”—is outfitted with a 120-MW plant to power a crucial water pumping plant owned by the Metropolitan Water District of Southern California, as well as other users in California, Nevada, and Arizona.

Parker’s power plant includes a penstock gate structure, four penstock tunnels, and a building that houses four 30-MW units, each which discharge up to 22,000 cubic feet/second, as Parker Dam’s Operation and Maintenance Supervisor Marcus Dickerson told POWER in May. “Each generator has a separate cooling system that draws off its own penstock, and when the unit is started up to run, a motor-operated valve—an air-operated valve in this case—opens up and draws off water from the penstock,” he explained. “When we were performing our annual maintenance and our routine maintenance, [the quagga mussels] were showing up in strainers in greater and greater numbers, and when we performed cooling maintenance, they were showing up in the air-coolers.”

The self-cleaning strainer at the head of the cooling system, which the five-man maintenance crew of hydroelectric mechanics typically cleaned annually, began requiring monthly cleanings, he said. “Also, our raw water strainer and other strainers going into cooling systems throughout the plant—for our service water—were having to be flushed weekly, and the strainer baskets dumped weekly.”

And more alarmingly, the crew began to see a more-urgent need to shut down units to remove and manually scrub unit heat exchangers because they had been rendered increasingly inefficient by mussel fouling. “Removing coolers, removing the end caps, cleaning them all out, resealing them, putting them back together, and reinstalling them is not easy,” Dickerson noted. Efforts soon grew costly. Reclamation estimates annual maintenance costs to control the mussels at the 16 coolers alone soared by $80,000.

Wary of the mussels’ potentially devastating impacts and fearing a vast infestation, the moment quaggas were detected at Lake Mead in 2007, Reclamation sprung into concerted action to control them. Among its first actions were to commission a task force to ensure the species did not affect power generation at the Lower Colorado Region’s Hoover, Davis, and Parker dams. Leading that task force was Willett in his former role as an environmental compliance manager at Hoover Dam. Solutions scrutinized over the task force’s eight-year study period included more than 100 coatings and materials to address biofouling on submerged substrates—including intake screens, trash racks, internal surfaces of large-diameter piping, and associated hydraulic equipment, he said.

In the end, Reclamation settled on ultraviolet (UV) treatment as the most viable and cost-effective solution, and in 2013, it selected the Hydro-Optic (HOD) UV system supplied by Atlantium Technologies Inc. as the preferred treatment option to supplement operational and mechanical activities already in place at the Hoover, Davis, and Parker dams. As Willett explained, UV irradiation is thought to physically prevent settlement of veligers, and it doesn’t need discharge permitting and has no detrimental environmental effects. “We chose [the technology] having done research on traditional UV,” he said. “The biggest difference was Atlantium’s HOD offered, with its proprietary properties, a much lower ability dose-wise to control the mussel larvae from settlement,” he said. “If you can lower the dose, then you have lower energy, lower maintenance, lower intensity—everything is at a lot lower cost.”

Reclamation moved quickly, first testing a full-sized medium-pressure HOD UV system in four low doses—100, 50, 40, and 20 millijoules per square centimeter (mJ/cm 2)—on a cooling water line at Davis Dam Unit 3. That unit, which is still operational, contains six medium-pressure UV lamps with a maximum power of 4.2 kW each. In the two-year-long study, all doses showed, albeit to varying degrees, they can prevent veligers before they grow to adulthood and cause blockages. In December 2015, Reclamation initiated a full-scale two-year-long study at Parker Dam, installing and commissioning HOD UV systems on each of the four main turbine cooling water lines downstream of the self-cleaning strainer. An additional system provided biofouling protection for the raw water supply of the on-site water treatment facility.

The four Parker Dam units on the cooling water lines deliver about 100 mJ/cm 2, though doses vary based on water flow rate, UV transmittance (UVT)—which is a factor of water clarity—and lamp intensity. “Installation was fairly simple,” Willett noted. “The HOD UV units were horizontally installed into the existing 14-inch piping.” The system includes an electrical cabinet and a control panel outfitted with sensors. “Each UV system accommodates a flow rate of 454 cubic meters per hour (1,600 gallons per minute) for water quality conditions with UVT as low as 85%,” he said. “The HOD UV system uses a total internal reflection-based design that—when coupled with the comprehensive monitoring of such critical parameters as flow rate, UV lamp intensity, and UVT percentage—allows the system to achieve and maintain the specified UV dose.”

As part of the cooling water improvement, however, Parker Dam also chose to replace existing raw water piping, owing to excessive corrosion. The four HOD UV systems on their own cost Parker Dam about $462,500 to install. According to Willett, with proper maintenance and operation the system is expected to last a minimum of 20 years. Atlantium performs all routine, semi-annual, and annual maintenance under a turnkey contract. Maintenance mostly involves changing out bulbs, which last roughly four to six months, and cleaning internal reflectors.

For Dickerson, the payoff has been huge. Despite needing an initial optimization phase, within the first year, biofouling-related maintenance of the coolers was reduced by 75%, and it was virtually eliminated in the second and third years. And more significantly, “We have not experienced any outages or degeneration due to quagga mussels since the installation,” he said.

Meanwhile, as a notable bonus, the HOD UV system at Parker Dam demonstrated it can also reduce settlement of native freshwater sponge, colonial hydroids, and bacteria-based micro-fouling, which have all been pervasive concerns. Dickerson also hailed the technology’s virtual elimination of most biofilm, including of a black sludge that consists primarily of cocci and rod bacterial cells.

Willett, meanwhile, lauded HOD UV technology’s vast potential across the power landscape, including at thermal and hydropower facilities that draw waters from bodies where quagga mussel infestations persist. In 2018, Hoover Dam initiated a similar full-scale installation for mussel settlement mitigation, he noted. Other utilities are also installing or considering full-scale treatments in Ontario, Arizona, and North Carolina, and several others have commissioned validations of the HOD UV technology, he said. ■