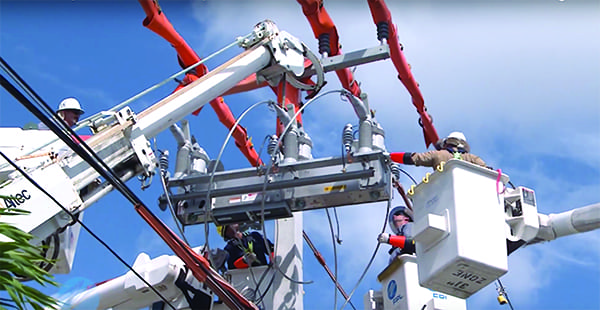 Facing Florida’s daunting weather issues, Florida Power & Light consciously set out to improve its outage restoration and grid resilience performance. The company turned to increasingly smart technologies to limit outages, improve response to outages, and reduce costs of responding to storms and everyday transformer trips. The results have paid off.

Florida Power & Light’s (FPL’s) website opens with this bold claim: “The most intelligent grid in America.” Its latest smart grid project—winner of this year’s POWER Smart Grid Award—adds muscle to that claim.

The FPL project, which it describes as “prioritizing smart grid devices to restore power and improve reliability in uncertain conditions,” also offers another way to look at the smart grid. It’s an approach that could pay off for other electric distribution companies, according to the utility. 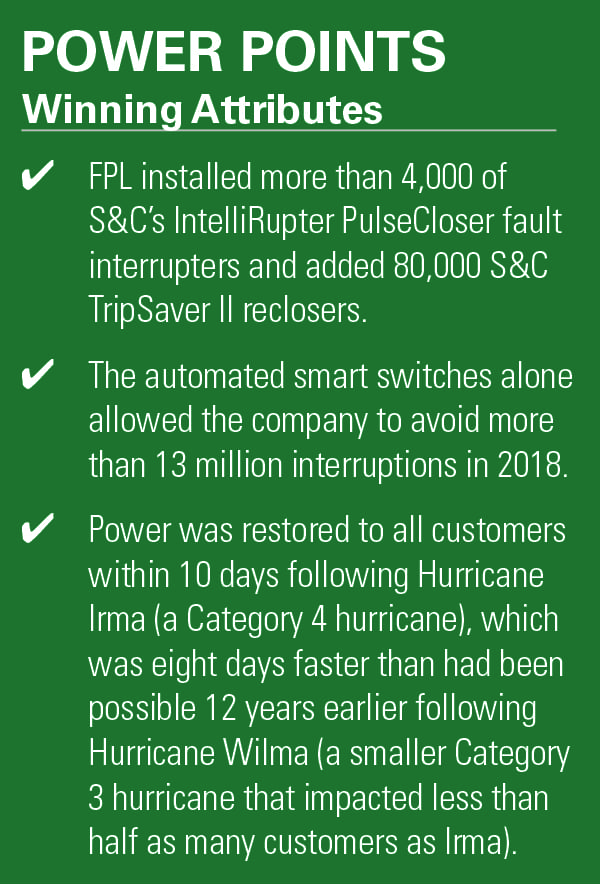 The conventional view of the smart grid rests on the notion of two-way communication between the electric customer and supplier. That’s what Electric Power Research Institute chief Kurt Yeager and former Motorola executive Robert Galvin had in mind when they began promoting the smart grid idea some 15 years ago. Wikipedia’s definition of smart grid reflects the vision of Galvin and Yeager: “A smart grid is an electrical grid which includes a variety of operation and energy measures including smart meters, smart appliances, renewable energy resources, and energy efficient resources.”

But there is another way to look at a smart grid. FPL and Chicago-based S&C Electric Co. are using high-tech equipment to produce a stronger grid, a grid that is self-aware and often self-healing. That’s smart.

William Monzon, FPL’s manager of grid reliability automation, told POWER, “We started looking at new ways to enhance grid reliability after the hurricane season of 2004–2005.” The first focus was on the traditional approaches to restoring power after storms, looking at poles, wires, and the like. In 2014, the company took a new, high-tech direction.

The company adopted “a strategic approach” to restoration and reliability, Monzon said. “We really kicked in smart grid deployment in significant numbers. We went all in on this,” starting with main lines and feeders, then laterals, and now, a focus on local distribution, and individual customers and customer transformers. The company has invested some $4 billion in the past 15 years, working closely with S&C, to use smart technology to enhance grid reliability. It has paid off.

Manny Miranda, FPL senior vice president of power delivery, said, “The smart grid technology we’ve deployed pays dividends for our customers every day. The automated smart switches alone have allowed the company to avoid more than 1.3 million interruptions just in 2018.” The company has worked closely with S&C throughout the process. “We don’t think of them as just a vendor,” said Monzon, “but as a strategic partner.”

FPL has installed more than 4,000 of S&C’s IntelliRupter PulseCloser fault interrupters, which use 95% less energy than conventional reclosers. S&C has said, “These allow FPL to isolate permanent faults and to isolate faults on an individual basis for temporary faults, allowing only customers close to the fault to see an outage.” FPL also added 80,000 S&C TripSaver II reclosers, which automatically test whether the outages are temporary or permanent.

S&C was a natural fit for FPL. The employee-owned company, founded in 1911, was built on the invention of the liquid fuse, the 1909 work of Edmund O. Schweitzer and Nicholas J. Conrad. The liquid fuse made high-voltage electric transmission and distribution practical.

“Over the last few years,” Mike Edmonds, S&C’s Chief Commercial Officer, told POWER, “we have worked with FPL to identify ways to use our technology to better serve its customers.” The companies have brought “advanced technology to areas of the grid that have never had it before and added more tools to help FPL continue to improve its service reliability.”

“The real change was in 2014,” said Edmonds, when the utility and its S&C technology supplier agreed on mass deployment of the TripSaver reclosers in the grid. “The business case was very strong,” he said, which Monzon echoed. That effort was completed at the end of 2018. FPL’s decision to go all in on the automated switches led S&C to open an assembly factory in Palm Beach County in 2015 to meet the utility’s demand.

FPL’s motivation to put major resources into its grid is a matter or geography and meteorology. The Florida peninsula is a weather catcher, with storms and hurricanes hitting the utility’s service territory from three directions—the Atlantic, the Caribbean, and the Gulf of Mexico. Corrosive salt spray hits its power lines from all directions. Windblown palm fronds can cause transformers to trip.

Florida is square in the target zone of Hurricane Alley, which the World Atlas defines as “a section of warm water within the Atlantic Ocean that spans from Northern Africa’s west coast all the way to Central America’s east coast and the Gulf Coast of the southern region of the U.S. The region is known as Hurricane Alley due to the fact that plenty of hurricanes originate from the zone.”

Florida has the highest rate of lightning strikes in the U.S., also according to the World Atlas, followed by Alabama. The majority of FPL’s 5 million customers live within 20 miles of ocean coast. The state also features lush landscape with frequent overgrown foliage brushing the power lines.

“The smart grid technology we’ve deployed pays dividends to our customers every day,” said Miranda. “The automated smart switches alone have allowed the company to avoid more than 13 million interruptions just in 2018.”

In the wake of Wilma, FPL restored power to 50% of its affected customers within five days, 75% in eight days, 95% in 15 days, and all customers in 18 days. After Irma hit the Florida Keys and passed through to expire in Tennessee, FPL had restored power to 50% of its affected customers in a day, 75% in three days, 95% in 7 days, and all within 10 days. According to FPL, its improved performance in restoring power made an $8 billion contribution to the Florida economy in the utility’s 35-county service territory. Prolonged outages not only cause residential customers grief, but cut sharply into business operations and revenues.

Building on the experience of using smart technology to build a stronger grid, what’s next? FPL and S&C are looking to a new smart grid application: eliminating what they describe as “nuisance fuse operations above overhead distribution transformers.” S&C noted, “Virtually every utility has faced the frustration of a distribution fuse link on a utility feeder blowing for no apparent reason. The resulting outage is both time-consuming and expensive to repair, and it can lead to unhappy customers.”

Nuisance transformer faults are generally temporary, with 70% to 80% of all transformer trips caused by squirrels, lightning strikes, or vegetation by S&C’s reckoning. They typically require utilities to rollout a truck and a repair crew to investigate the outage and change the fuse. According to S&C, “Every 100,000 transformers can require 3,300 unnecessary truck rolls to replace fuses” or $3.3 million in operations and maintenance expenses.

In a test of the S&C technology, FPL installed 1,000 of the resetting fuses on 50–75 kVa overhead distribution transformers. The results were positive and the utility now plans to deploy 50,000 across its distribution system.

“The investments we’ve made throughout the last 13 years to build a stronger, smarter energy grid continue to provide tangible benefits to our customers in the form of higher day-to-day reliability and faster restoration following a major storm,” said FPL CEO Eric Silagy. “For example, the unprecedented size and scope of Hurricane Irma tested every piece of equipment across our 27,000-square-mile service area in 2017. Smart grid technology enabled us to avoid more than a half million outages during the storm and allowed us to restore service to customers even before it was safe for our trucks to roll.”

—Kennedy Maize is a long-time energy journalist and a frequent contributor to POWER.