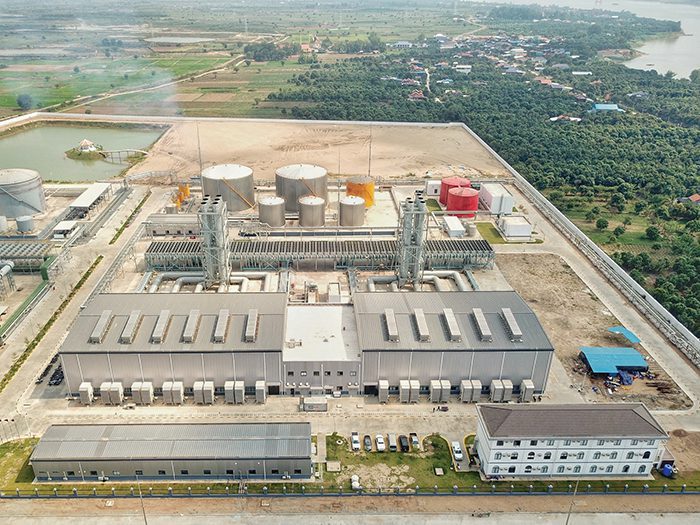 The Phnom Penh power station supports Cambodia’s decarbonization goals. The 200-MW facility’s 11 dual-fuel engines can operate on heavy fuel oil today, with a goal of using much-lower-emission natural gas when the necessary infrastructure is constructed in the future. The technology is uniquely suited for developing countries that want to reach their climate targets but also want to expand their economies.

Cambodia has undergone a significant transition during the past two decades, reaching lower-middle-income status in 2015 and aspiring to attain upper-middle-income status by 2030, according to The World Bank. The country’s economy has expanded greatly over the years, due in large part to garment exports and tourism, among other things. In fact, Cambodia sustained an average real growth rate of 7.7% between 1998 and 2019, making it one of the fastest-growing economies in the world.

Rapid economic growth, coupled with a tariff reduction policy, has caused demand for electricity to also increase dramatically in Cambodia over the past 20 years. The International Energy Agency reports Cambodia’s total electricity consumption grew exponentially from 0.4 TWh in 2000, to 8.65 TWh in 2018. Much of the growth in the electricity supply was fueled by biomass and oil, but coal generators and hydropower plants were also added to the mix during that time.

Cambodia experiences a dry season from October to April, which can adversely impact hydropower production. The 2018–2019 dry season was particularly troublesome, causing Cambodia’s national grid to face stability issues due to the inability of its hydropower plants to operate at full capacity. The situation led the Cambodian government to launch an emergency program in 2019 to stabilize the supply system through the addition of more flexible generation capacity (see sidebar).

One of the ways Cambodia’s national utility, Electricité du Cambodge (EDC), sought to increase flexibility was by adding a 200-MW power station in Phnom Penh, the nation’s capital. In August 2019, MAN Energy Solutions and China National Heavy Machinery Corp. (CHMC) were jointly awarded a contract to build the facility. CHMC took responsibility for the engineering, procurement, and construction, while MAN was tasked with delivering and commissioning dual-fuel reciprocating engines for the new plant.

“The new power plant will make a significant contribution to securing the power supply in Cambodia, regardless of weather or climatic conditions,” Wayne Jones, chief sales officer at MAN Energy Solutions, said.

To meet the project’s ambitious timetable, MAN Energy Solutions chose a standardized and modular engine setup with a proven track record. The schedule required the engines to be manufactured and delivered to the site in less than six month, which MAN Energy Solutions accomplished. A highly coordinated and elaborate project management process was also implemented to ensure the installation remained on track, the company told POWER. Among timesaving aspects employed was a method of safely commissioning certain components, even while mechanical work on related systems was still ongoing.

Meeting EDC’s ambitious construction schedule also called for a high degree of process efficiency and professionalism among the project partners. The project followed a tight timeline to successfully commission all 11 engines in less than 20 months. Ultimately, the MAN project team succeeded despite the numerous constraints posed by COVID-19.

“For three months in the spring of 2020, our supervisors were only able to monitor the assembly of the plant remotely,” said Martin Höhler, head of Power for MAN Energy Solutions’ Asia-Pacific region. “However, thanks to digital tools, a special effort by all sides, and our excellent cooperation with CHMC, we were able to make up this time and maintain the ambitious schedule.”

At the peak of the construction phase, about 500 workers were onsite. A mix of local workers, and expats from CHMC and MAN, combined their expertise to build the power plant. According to MAN, “a proper HSE [health, safety, and environment] Management System was implemented onsite” at the beginning of the construction phase. A MAN Energy Solutions spokesperson said the system “was supported by continuous training and regular follow-up on HSE issues with all onsite workers.” Furthermore, the HSE management system was monitored on a regular basis, ensuring onsite safety was constantly maintained.

MAN Energy Solutions will continue to support the project for at least the next five years through a service contract agreement. MAN PrimeServ, the company’s after-sales brand, will supply original equipment manufacturer spare parts, special services, and digital solutions for the power plant in conjunction with the deal. SchneiTec Co. Ltd., a Cambodian operations and maintenance company, is responsible for operation of the facility.

The Phnom Penh power plant will initially run on heavy fuel oil. However, it is expected that the dual-fuel engines will operate on natural gas in the future. “The plant is located directly on the banks of the Mekong River in the Lvea Aem district in Kandal Province, with the potential to add an LNG [liquefied natural gas] terminal at a later date. Our engines are designed for natural gas and can switch seamlessly from one fuel type to another during operation,” Höhler explained.