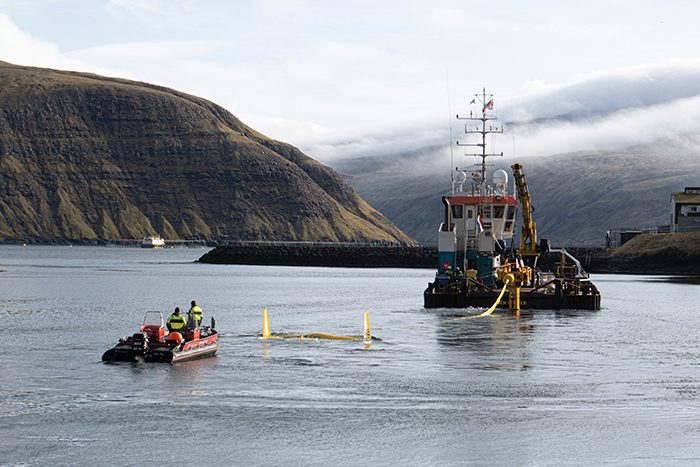 After more than a decade of development, Minesto’s novel underwater “kite” technology kicked off commercial operation with a 100-kW project in the Faroe Islands. Despite some hiccups, the pioneering marine power project is continually improving its production performance through upgrades and modifications, and it is now readying for scale-up to 1.2 MW.

Dr. Martin Edlund, CEO of Minesto, summarizes the efforts of his company—a 2007-established spinoff of Swedish aerospace manufacturer Saab—in a succinct, thought-provocative statement: “We fly a kite in the ocean.”

The technology behind Minesto’s innovative Deep Green (DG) subsea kite essentially converts kinetic energy from low-flow tidal streams and ocean current streams—with velocities between 1.2 meters per second (m/s) and 3 m/s—into power via a turbine mounted beneath a “wing” that is tethered to the seabed or surface platform. The wing is subjected to the lifting force of the underwater current, which propels the system through the water in a “figure-eight” trajectory using a control system and rudder. As the kite “flies” across the current, it pushes the turbine through the water “at a speed several times faster than the actual flow rate,” a principle that essentially multiplies the stream flow through the turbine and enables efficient energy conversion in low-velocity marine currents. Power produced in the onboard generator is then transmitted to shore via a cable in the tether that is attached to the wing.

“It’s really easy to convert [the kinetic energy] into electricity since it’s a linear, steady movement,” Edlund explained. “It’s also a way of sweeping a large area and collecting energy from a larger cross-section of the sea. That is the key to addressing the real natural resource, which exists in basically all oceans around the world, but whose flows are too low for conventional horizontal-axis turbines.”

Aside from the DG system’s out-of-box approach to power generation, “the uniqueness is associated with clear functionality that opens up the tidal and ocean current energy to a global market—not just the niche market. And it also makes us today by far the most cost-effective alternative among the ocean energy technologies—and there are quite a few today,” Edlund said. “Our claim is rather simple in that sense: When the technology matures [through] a quick learning curve duration, we will be more cost-competitive than offshore wind, which today is considered a commercial technology standing on its own legs.”

The Leap to Commercial Operation

Since Minesto rolled out its first iteration of the subsea kite—a prototype it called “QuappenKite”—in 2007, it has quickly marked new developmental milestones. In 2009, it produced the first electricity from the SeaKite I prototype in tank tests in the Netherlands, and then conducted ocean trials with the SeaKite II in 2011. In 2013, it built the first Deep Green Ocean prototype with a 3-m wing span, and ran it at full tidal cycle at Minesto’s marine energy test site Strangford Lough in Northern Ireland. Finally, in June 2018, the company commissioned the first Deep Green utility-scale project—a single 500-kW demonstrator Minesto calls “DG500”—at Holyhead Deep off the coast of Wales.

Then in February 2020, in perhaps its most pivotal milestone, Minesto secured a 2.2-MW power purchase agreement (PPA) with SEV, the main energy supplier for the Faroe Islands, an autonomous territory within the Kingdom of Denmark that comprises 18 islands in the middle of the North Atlantic Ocean (north of Scotland and halfway between Norway and Iceland). The breakthrough approach by SEV, which is owned by municipal generators that serve the territory’s different islands, was founded on its determination to phase out its oil use entirely by 2030, owing mainly to price volatility. SEV’s long-term ambitions include a large-scale build-out of tidal energy of between 30 MW and 70 MW, making it a dominant and predictable energy source for the islands.

Minesto kicked off operation of its first project for SEV in July 2020 in Vestmannasund, a strait between the islands of Vagar and Steymor, with the installation of project infrastructure, including the foundation, export cable, and onshore control station for a scaled-down 100-kW version of the Deep Green tidal kite. Commissioning began in December 2020. “The DG100 system consists of the kite, tether, and the bottom joint,” Minesto said. However, during the initial commissioning phase, a mechanical failure occurred in the power plant’s mooring interface, but operations soon resumed. Power production officially began in late 2020.

The Process of Continuous Improvement

Since that achievement, Minesto has been optimizing and upgrading the DG100 system to increase production performance in terms of both maximum and average power. “This has been made possible, among other things, by improved generator configuration and optimized rudder control,” it said. “Tides as a natural resource vary in intensity over the day. To utilize all available energy, it is of great importance to optimize the power plant’s electricity production for both high and low flows,” the company explained.

This July, Minesto announced it concluded the second stage of evaluation, reporting that key aspects of test operations and electricity production with the DG100 power plant (“most importantly the production power curve”) were third-party verified by DNV in accordance with the standard IEC 62600-200:2013 and the principles stated in DNVGL-ST-0164. “Among other things, we have reached new record levels in terms of the highest measured maximum production at 139 kW and the highest average power on a lap with 92 kW,” said Edlund. “We generate electricity to grid over full tidal cycles with satisfactory performance, which is very positive from a cost of energy perspective.”

However, Minesto declined to publicly reveal more detailed performance data from electricity production, citing work that is “underway to protect technical solutions linked to the system’s electricity production and performance.” Edlund, however, suggested that work of scaling up the systems to 1.2 MW is “in full swing, with design and technology decisions being made based on the DG100 system’s performance and production results in the past year in Vestmannasund.”

Success of Minesto’s Faroe Islands project will determine how far SEV will progress with its long-term ambition to add 30 MW to 70 MW of generating capacity from tidal streams. The next step on the Faroe Islands may be a larger installation, potentially of 10 MW, comprising 1-MW DG plants. According to some industry analysts, Minesto will likely establish a special purpose vehicle with SEV to seek project finance for the next phase.

Minesto is meanwhile also developing several other projects. At its Holyhead Deep in Wales, the company has so far validated a 500-kW system, and a long-term plan includes the construction of a production array to demonstrate the technology at utility scale, with an initial target of 10 MW, but the site is eligible for a capacity to exceed 80 MW in total.

In France, Minesto has entered into a collaboration with French energy giant EDF to evaluate opportunities on mainland France (and around the world). The companies are currently working to install a DG100 system off the coast of Brittany.

And in March, Minesto entered into a memorandum of understanding with Schneider Electric to create ocean energy farms based on Minesto’s technology. “The collaboration reaches from technical system integration and project management to sales and project finance opportunities,” Minesto said.

According to Edlund, delivery of the DG100 opens doors to vast opportunities on a microgrid scale, whereas, demonstration of the 1.2-MW power plant will enable utility-scale prospects. “This is, of course, where the big market is in volume and financial [opportunity]. But the microgrid market is an important step in markets where we can address higher electricity prices and power-to-X in remote areas that are today dependent heavily in diesel gensets.” For now, Minesto’s core technology and business model is rooted in delivering systems, hardware, including balance-of-plant components that are unique to the company, as well as conventional services, such as maintenance and spare parts supply.

Looking ahead, Minesto is actively exploring markets in Asia, including in South Korea, Japan, and Taiwan. However, the commercial rollout phase will better determine suitability. “The most important aspect of new energy technologies is that they can prove a cost reduction trajectory, and that makes them relevant and affordable on a global scale,” said Edlund. “We are there. This is based on our in-depth analysis of the existing structure, of the existing supply chain. It’s based on performance levels of the system that we have proven on a commercial scale.” ■