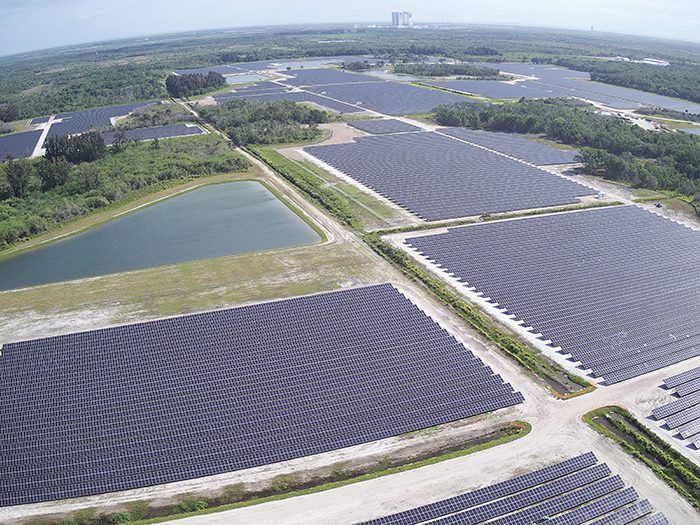 Florida provides a wealth of opportunity for utilities building a solar power portfolio, and Florida Power & Light has taken a lead role with its dozens of solar energy centers.

Power generation companies are continually looking for ways to make their operations more cost-effective, in part by seeking out investments that will bolster the bottom line while maintaining their commitment to provide customers with reliable electricity. Many of those utilities want to take advantage of renewable energy resources, making cleaner energy a larger piece of their generation portfolio.

Florida Power & Light (FPL), a subsidiary of NextEra Energy Inc. that provides power for more than 11 million Floridians, has taken a lead role in providing solar power across much of the state, building dozens of utility-scale arrays, and working with businesses and homeowners in support of rooftop solar systems. FPL in 2019 announced its “30-by-30” plan, a program in which the utility pledged to install 30 million solar panels by 2030. FPL in June of this year said the program was more than 40% complete after just two years, with 42 solar energy centers in operation, including the Discovery Solar Energy Center (shown above) at Kennedy Space Center.

Many of those solar energy centers support FPL SolarTogether, the company’s community solar initiative. “Each of our solar energy centers feeds the FPL grid, benefiting all FPL customers,” said Valle. “Twenty of our 42 operating solar energy centers are part of the FPL SolarTogether program—the largest community solar program in the country. It’s a subscription-based program that offers participants the option to meet up to 100% of their energy needs from renewables, giving everyone the opportunity to participate in solar, no matter where they live and whether they rent or own their home or business. The program launched 18 months ago and is now fully subscribed, demonstrating the desire for customers of all sizes to have renewable energy options.”

FPL has said it plans to have 11.7 GW of universal solar power generation capacity online by the end of 2030. “Nobody in the country is building more solar than FPL,” Eric Silagy, president and CEO of FPL, said in a June news release. “We’re dedicated to providing our customers with clean, affordable and reliable energy, while keeping bills among the nation’s lowest—and our rapid solar expansion helps us consistently deliver on this promise. In total, FPL customers are expected to save approximately $421 million from the cost-effective solar investments the company has made to this point.”

Valle said the 42 operating solar energy centers represent 3,015 MW of generation capacity. “Combined, our solar fleet consists of over 12 million photovoltaic [PV] solar panels and can generate enough energy to power more than 600,000 homes annually,” Valle said. “Once our ‘30-by-30’ plan is complete, solar energy is expected to make up 20% of FPL’s total energy mix.”

“Every FPL solar energy center stands out for its ability to create jobs, increase local tax revenue, and improve the natural environment,” said Valle, pointing to Babcock Ranch and other solar farms.

Valle touted the installations’ environmental benefits. “The FPL Sweetbay Solar Energy Center is an excellent example of how FPL solar projects not only provide clean, renewable energy for Floridians but also help to restore and preserve our natural resources,” he said. “As part of the project, FPL preserved 80 acres of wetlands and an additional 45 acres of upland buffer around each wetland, restored the hydrology of the wetlands by installing six water control structures, and, through the Martin County Preserve Area Management Plan, preserved four acres of upland habitat, and eradicated and removed 90 tons of invasive plant species. Additionally, through FPL’s solar stewardship program, several waterfowl nest boxes and wildlife perches were installed along with approximately 40,000 native trees, shrubs, and wetland plants to increase biodiversity within the on-site wetlands and buffers.”

DeSoto County has been at the forefront of FPL’s solar efforts for more than a decade, a collaboration that continues. “In May, FPL completed its fifth solar energy center in DeSoto County, the FPL Rodeo Solar Energy Center. FPL’s partnership with DeSoto is unique, because the county has been the innovation hub for FPL’s clean energy investments since the construction of our first large-scale solar energy center—the FPL DeSoto Next Generation Solar Energy Center. At 25 MW, it was the largest in the nation when it was commissioned by President Barack Obama in 2009,” Valle said.

“Then, in 2016, FPL started to build solar more cost-effectively with three 74.5-MW solar energy centers, including the FPL Citrus Solar Energy Center in DeSoto. Each of those three centers constructed in 2016 was three times the size of the first and cost less to build. Then, in 2018, DeSoto made history again when FPL announced the first-of-its-kind large-scale application of ‘DC-coupled’ batteries at a solar plant in the nation, also at the FPL Citrus Solar Energy Center,” he said.

Valle said FPL is proud of the utility’s 40th solar energy center, the FPL Discovery Solar Energy Center at the Kennedy Space Center. The center—named after the Discovery space shuttle—features about 250,000 solar panels, all feeding directly into FPL’s electricity grid to serve Kennedy Space Center and other areas. “FPL worked with NASA to select a plot of land that could be used for solar development,” Valle said. “Prior to the project installation, the site contained old orange groves that had become dormant and was overgrown with invasive plant species.”

Janet Petro, acting director of the Kennedy Space Center, emphasized the importance of the solar energy center during a June ceremony to mark its commissioning. “Kennedy Space Center is our nation’s gateway to the universe, but our responsibility to future generations starts right here at home. For this reason, leasing the land for the Discovery Solar Energy Center to FPL is a win-win,” said Petro. “Now, previously underutilized NASA land is generating clean, zero-emissions energy for the space center and beyond.”