The Sri Lankan government in December commissioned the first phase of the 300-MW Kerawalapitiya Thermal Power Plant, the nation’s biggest combined-cycle power plant project. The $300 million plant in the western part of the country commenced operations by generating 200 MW (Figure 7). In its second phase, it will expand to 300 MW. Per government estimates, power produced by the plant is priced at about 20 rupees or $0.18/kWh. 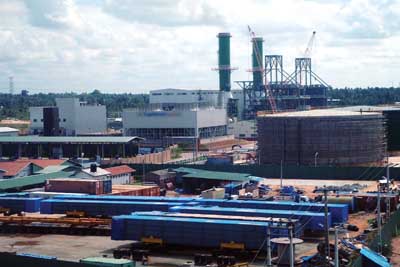 7. Island power. Sri Lanka, a country that depends largely on hydropower to meet surging demand, recently commissioned a 300-MW thermal power plant in Kerawalapitiya, a region in the island nation’s west. The “Yugadanavi” is the country’s first combined-cycle power plant. The project was reportedly completed in 10 months. Several new power plants are also in the offing. Courtesy: Sri Lanka Department of Government Information

Sri Lanka, which depends largely on hydropower, green-lighted the project in 2005 after the Ceylon Electricity Board, a governmental body, warned that power demand for the nation of 20 million would surge 8%, and at least 150 MW of new capacity was critically needed by 2008. The government awarded the plant construction tender to Sri Lankan company Lakdhanavi Ltd. According to available information, despite ballooning costs, the project was completed in just 10 months, aided by about 75 local engineers working around the clock.

Lakdhanavi expects that the second phase of the project could be completed by the end of this year and will further reduce costs. According to its agreement with Lakdhanavi, the Sri Lankan government will own the plant after 20 years. The government expects that after completion of two projects currently under construction — the 300-MW coal-fired Norochcholai power plant and the 150-MW Upper Kotmale hydroelectric power station — Sri Lanka’s power generating capacity will have exceeded 750 MW. Construction of Norochcholai, the country’s first coal power plant, is expected to be completed by 2012, while the Upper Kotmale station will begin operation sooner, by 2010.

A second coal power plant at Sampur, Trincomalee, is also in the offing. In November, the country’s power and energy ministry said the project’s deal-making hurdles had been cleared, and that the joint venture between the CEB and the National Thermal Power Corp. of India could soon be under way. Each party will have an equity stake of $75 million in the projects. Both will borrow required funds. The 500-MW plant is expected to take between three and four years to build, and the government anticipates that the plant will be expanded to 1,000 MW in the project’s later phase.