In the early morning of May 1, 2017, Block Island, Rhode Island, shut off the diesel generators that had powered the island for nearly a century. The lights on the island flickered off before turning back on, this time powered by the nation’s first offshore wind farm, located three miles off the island’s coast. 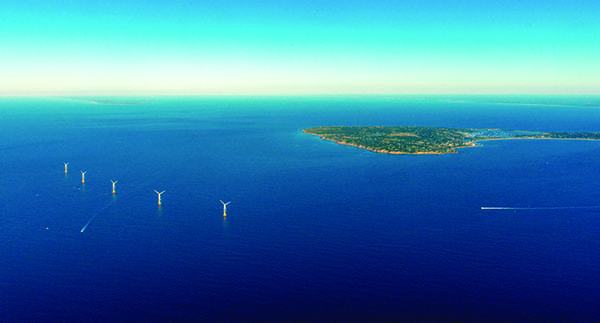 Three miles off the coast of Rhode Island’s Block Island sit five massive wind turbines, each towering 560-feet above the water below, nearly twice the height of the Statue of Liberty. The wind farm is small, but as the first offshore wind farm in the U.S, a notable achievement for owner Deepwater Wind.

Block Island is a small island of less than 10 square miles located 13 miles off the coast of mainland Rhode Island. The population of the island is just over 1,000, though during the summer months the area is a popular vacation destination, and the population can triple at times.

Until May 2017, the island was not connected to the mainland grid. To provide residents and visitors with power, diesel was shipped from the mainland and burned at a small, but loud and dirty, generating plant. The residents of the island had long desired an alternate form of energy, particularly in the late 2000s when diesel prices became unmanageable.

While the wind farm itself powered up in December 2016 and started delivering power to the mainland grid, Block Island didn’t flip the switch until May. The occasion was celebrated by Block Island officials and residents.

“The construction of the Block Island Offshore Wind Farm and the undersea cables represent a monumental engineering effort. On Block Island, where the wind once powered gristmills and filled the sails of the fishing fleet, electric power will now be generated with each rotation of the giant turbine blades. The nature of our energy supply has taken a giant step forward and in doing so sets the pace for other offshore wind development. It is gratifying to have The Town of New Shoreham be a part of and benefit from this endeavor,” Town of New Shoreham First Warden Ken Lacoste said in a Block Island Power Co. press release marking the occasion.

According to Deepwater Wind, the plant will reduce carbon emissions by 40,000 tons each year. “That’s 800,000 tons over its 20-year life,” the company’s website says.

Switching from diesel and connecting to the mainland grid will also drive down Block Island residents’ power bills. “Wholesale energy prices are at historic lows right now and to have the opportunity to secure some long-term contracts for our customers provides price stability and allows customers to budget month to month, rather than have their electric bills tied to volatile diesel fuel prices,” Block Island Power Co. President Jeffery Wright said in the May 1 release.

The Block Island Wind Farm is not just notable for its location; its turbines are the perfect illustration of the impact of GE’s 2015 acquisition of Alstom’s power and grid business. In March 2015, months before the acquisition was finalized, Deepwater had ordered five of Alstom’s massive Haliade turbines. Upon finalization of the acquisition, GE took over production of the Haliade, adding its own spin to the proven technology.

GE decided to incorporate its 6-MW gearless direct-drive permanent magnet generators into the Haliade turbines and protect them with the company’s Pure Torque design technology. According to GE, this coupling allows for the elimination of the gearbox, reducing the number of moving parts and, in turn, reducing maintenance needs.

The technology used in the turbines at Block Island had been validated in earlier demonstration projects, but the Block Island Wind Farm is the first commercial application of GE’s Pure Torque direct-drive technology.

The many components of the turbine were constructed in different parts of Europe. The turbine blades and tower sections were constructed by LM Wind Power in Denmark. The five nacelles were built in a manufacturing facility in St. Nazaire, France, and transported 3,300 miles across the Atlantic Ocean to the U.S. on Norway-based Fred. Olsen Windcarrier’s Brave Tern, an offshore wind installation vessel. Once the Brave Tern arrived at Block Island, the vessel’s four legs were lowered (Figure 1), transforming the boat into an installation platform.

Once the turbine components made it to the Block Island site, final construction took only about a month as the five steel jacket foundations had been installed during an 18-week construction period the previous year.

The First of Many?

Though the Block Island Wind Farm is the nation’s first offshore installation, it may be the first of many. “The potential of offshore wind as a renewable energy resource in the United States is enormous. A robust and sustainable U.S. offshore wind industry could decrease [greenhouse gas] emissions, diversify the nation’s energy portfolio, generate affordable power for homes and businesses, and revitalize key economic sectors,” according to the National Offshore Wind Strategy, developed by the U.S. Departments of Energy (DOE) and the Interior (DOI).

The report finds that “a technical potential of 2,058 [GW] of offshore wind resource capacity are accessible in U.S. waters using existing technology. This is equivalent to an energy output of 7,200 terawatt-hours per year—enough to provide nearly double the total electric generation of the United States in 2015.”

Not only is there clear technical potential for offshore wind in the U.S., there is also growing demand. As coastal states retire traditional power plants, alternatives will be needed. It’s also worth noting that nearly 80% of the nation’s electricity demand is located in these coastal states.

Of course, as with any emerging market, there are hurdles for U.S. offshore wind to overcome. “For example, the costs of offshore wind need to fall substantially, and the supply chain needs to be developed. The regulatory process for offshore wind could be further optimized, and data gaps associated with environmental impacts need to be addressed. The unique set of costs and benefits associated with offshore wind energy needs to be better quantified and communicated to policymakers and stakeholders to allow for their full consideration in decisions about offshore wind projects and policies,” the national strategy says.

Luckily, progress is already being made to address these challenges. Offshore wind costs are falling globally, and according to the national strategy, it is likely that the European Union will meet its goal of a levelized cost of energy of €100/MWh (approximately $112/MWh) by 2020.

“We are optimistic about the future of the offshore wind market in the U.S.,” Rieck said. “We think the key for continued momentum is for policymakers to create the scale and visibility needed to maximize the economic development benefits that can be delivered by offshore wind.”

Further, the U.S. currently has a number of offshore wind projects under development. According to DOE, as of August 9, 2017, there are 28 projects, totaling 23,735 MW of potential installed capacity in the works in the U.S.

Regardless of what the future holds for offshore wind development and how many offshore wind farms are to come, the Block Island Wind Farm will always be the first—and one of POWER’s Top Plants. ■