The U.S. Department of Energy (DOE) and Great River Energy are testing a new coal-drying technology that could dramatically reduce the emissions of lignite-burning power plants. The project was selected for funding during Round I of the DOE’s Clean Coal Power Initiative (CCPI), a series of competitions to demonstrate a range of promising clean-coal technologies. To date, the DOE has run two CCPI rounds and given financial assistance to eight projects.

Great River Energy (GRE) is conducting the $31.5 million project at its Coal Creek Station (Figure 1). The Lignite Fuel Enhancement System (LFES) project is being administered by the DOE’s Office of Fossil Energy and managed by its National Energy Technology Laboratory (NETL). The DOE is expected to provide $13.5 million for the project over its 54-month duration. (See box at end of story for project participants.) 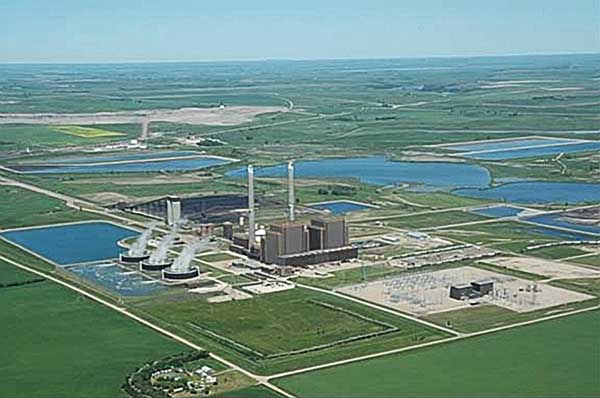 Coal Creek Station, a 1,092-MW lignite-fired power plant in Underwood, North Dakota, supplies baseload electricity wholesale to 28 GRE distribution cooperatives in Minnesota and Wisconsin. Its two identical 546-MW units are both powered by a tangentially fired subcritical boiler from Combustion Engineering and a single-reheat, tandem-compound turbine-generator from General Electric. Both units have design steam conditions of 1,005F (main and reheat steam) and 2,520 psi.

At Coal Creek, electrostatic precipitators remove more than 99.5% of particulates, while wet-lime countercurrent spray tower scrubbers remove 90% of SO2 from 60% of the plant’s flue gas. The boiler fires lignite from the nearby Falkirk mine with a heat content of 6,200 Btu/lb (HHV) and a total moisture content of 38%. Coal Creek burns 7.5 million tons of the fuel annually.

The project is demonstrating the Lignite Fuel Enhancement System, which uses waste heat to dry fuel before it is fed into the boiler. Typically, about 45% of the fuel heat put into a conventional pulverized coal-fired power plant is lost in the condenser; another 20% exits the stack. The LFES (Figure 2) exploits this heat, which otherwise has little use because of its low quality. The box lists some advantages of predrying coal. 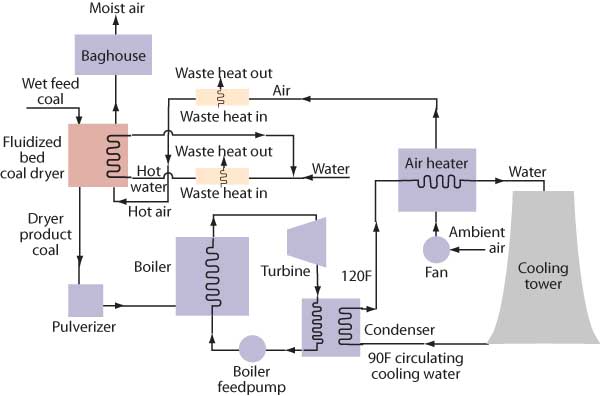 In 2001, prior to launching the CCPI project, GRE performed test burns of partially dried coals to assess handling issues and to demonstrate the benefits of using drier coals. Based on encouraging results, GRE, with the support of the Lignite Energy Council and the North Dakota Industrial Development Commission, designed and built a 2-ton/hr pilot-scale lignite dryer.

GRE tested a number of lignites in the pilot-scale dryer to evaluate the drying potential of different feedstocks. Tests confirmed the viability of lignite drying and provided a basis for a larger-scale demonstration under the CCPI.

The CCPI project is progressing in phases. In the first phase, a 115-ton/hr prototype capable of drying up to 25% of the lignite fed to Coal Creek Station’s 546-MW Unit 2 was designed, built, and tested. It was a smashing success, so Great River Energy designed four full-scale (135-ton/hr) dryers able to supply 100% of Unit 2’s fuel needs. Construction of the full-scale dryer is in progress.

The heart of the LFES is a two-stage fluidized bed inside a single vessel. Hot fluidizing air and hot water in coils heat the lignite in each stage. The first stage separates fluidizable from nonfluidizable lignite, preheats the former, and sends a uniform flow of fluidizable lignite over a weir to the second stage. The second further heats this lignite, drying it to a target moisture level.

Optimally, the full-scale dryer will use a combination of fluidized-bed mixing, segregation, and drying techniques. In the prototype dryer, the stream of dried lignite from the second stage is sent over a weir into a hopper. From the discharge hopper, the lignite is put on a conveyor by three rotary air lock feeders. The full-scale dryer will be sized so its throughput is 20% higher than that of the prototype unit, to meet 100% of Coal Creek’s fuel needs.

In the LFES, hot air fluidizes and heats the lignite to remove moisture from it. The air stream is cooled and humidified as it flows upward through the fluidized bed. The amount of moisture that can be removed is limited by air stream’s drying capacity, which is supplemented by an in-bed hot water coil. Figure 3 is an external view of the prototype dryer’s plenum area and the inlets and outlets of its hot water coils. 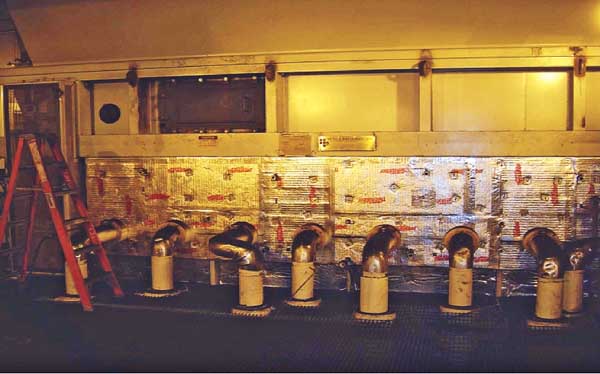 To prevent condensation in the freeboard region of the prototype dryer, its outlet was designed to have a relative humidity of less than 100%. Particulate control equipment — a dust collector (baghouse) and a discharge fan — remove elutriated fines from the moist air stream leaving the dryer. Collected particulate matter is mixed with the coal product stream, and particle-free air of 99% relative humidity is discharged to the atmosphere.

During the first phase of the project, GRE built the prototype dryer and used it for one year to process about 300,000 tons of lignite. Usually, the dryer was operated at a throughput of 75 tons/hr, but dryer capacity tests were conducted over a range of 75 to 105 tons/hr. The dryer’s optimum operating conditions and the effects of partially dried lignite on unit performance were determined by running a series of paired performance tests (with the dryer on and off) under carefully controlled conditions.

The dried lignite was directed to one of Coal Creek Station’s eight pulverizers, each of which provides about 14% of the plant’s total fuel. Although the dryer reduced the moisture content of the overall fuel feed by just 1.1%, its use provided many significant operating benefits:

Why did drying the lignite before burning it produce lower pollutant emissions and higher efficiencies? The 7.5% NOx reduction can be attributed mostly to a 12% reduction in the primary air (PA) consumption of the mill pulverizing the partially dried lignite. This reduction also lowered the pulverizer’s power consumption. Following the performance tests, all eight mills were modified so they can run on 30% less primary air and contribute to further reductions in NOx emissions. The 0.5% drop in unit CO2 emissions was caused by the 0.5% rise in boiler efficiency.

The 1.9% decrease in unit SO2 emissions can be explained as follows. Because Coal Creek’s existing wet-lime spray dryers have limited flow rates, some flue gas must bypass them. When the LFES is running, the lower moisture content of the lignite fed to the boiler increases the amount of flue gas that the spray dryers can handle, raising their overall SO2 removal efficiency. The full-scale dryer is expected to have a significantly higher SO 2 reduction rate than the prototype because the full-scale unit will segregate sulfur-rich components of lignite such as pyrites in its first stage for removal and separate handling.

The sulfur content of the dryer’s segregated stream is much higher than that of its product stream because pyrites are denser than lignite (see table and Figure 4). The full-scale dryer will process this segregated stream. After processing, the stream would not be returned to the boiler, reducing the overall sulfur input to the boiler by 7% to 12%. With the full-scale coal-drying system operating at the target moisture reduction level, the flue gas flow rate to the spray towers will be reduced by about 4%, further lowering SO2 emissions. 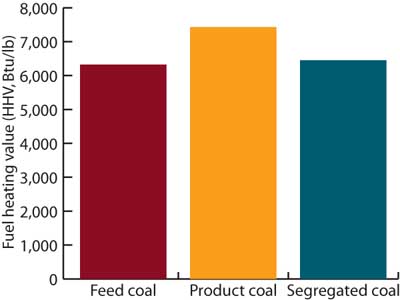 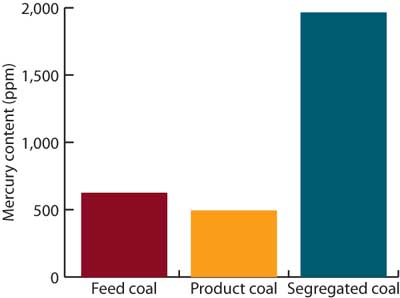 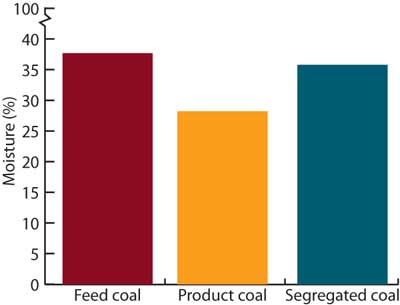 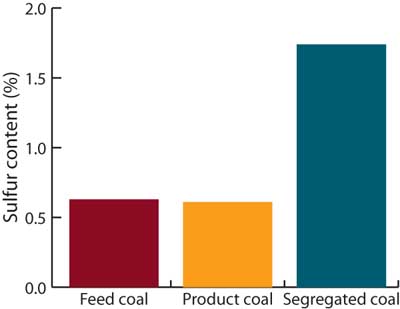 As with SO2, the 0.5% reduction in mercury emissions produced by operating the prototype dryer mirrors the 0.5% improvement in boiler efficiency. And, for reasons similar to those cited for SO2 reduction, it is expected that the full-scale dryer will capture much more mercury than the prototype.

As the table and Figure 4 also show, tests of the prototype dryer indicated that the nonfluidizable lignite entering it contained about three times more mercury than the feed coal stream. That’s because the nonfluidizable heavy materials in Falkirk lignite are rich in mercury. Segregating the streams reduces the mercury concentration of the fuel feed prior to combustion, in turn reducing the downstream mercury capture load.

The use of drier lignite also increases mercury oxidation during the combustion process. This oxidized mercury, which is water-soluble, is removed by the wet-lime spray towers.

Phase II of the project envisions designing and building a full-scale demonstration unit with four integrated dryers whose combined throughput of 3.75 million tons of lignite per year will be sufficient to fully fuel Unit 2. The design has already been completed, and fabrication of the dryer began this April.

The project schedule calls for finishing and installing the four-dryer system by March 2008 and testing it beginning the following month. The system then will be demonstrated through the end of 2008. If the demo produces the hoped-for results, the system will be commissioned as part of Coal Creek Unit 2.

What will constitute those hoped-for results? Based on the results of using the prototype dryer to process 14% of Coal Creek’s total fuel feed, engineers project that the full-scale integrated four-dryer system will be able to reduce by 8.5% the moisture content of all lignite burned at the plant. Such a reduction would:

These lower numbers will produce considerable savings. By themselves, the expected reductions in fuel and auxiliary power consumption, wear and tear on equipment, and desulfurization requirements from operating the full-scale dryer are expected to cut Unit 2’s production cost by $3/MWh. Other benefits whose economic value has yet to be evaluated include NOx and mercury reductions.

Having seen first-hand the benefits of lignite drying, GRE now is planning to install a separate drying system on Unit 1. This installation is outside the scope of the CCPI demonstration project and will be funded entirely by GRE.

In addition to the price of the full-capacity integrated dryer and associated coal-handling equipment, the demonstration project includes the one-time cost of developing the prototype dryer. So the cost of building another dryer and retrofitting it will be substantially lower.

The estimated installed cost of the four dryers for Unit 2 is about $8 million. That figure does not include the costs of associated coal-handling equipment and control systems because they are site-specific. The dryer technology is available for licensing by GRE.

Successful commercial application of the technology could produce striking benefits nationwide. In the U.S. today, more than 100,000 MW of generating capacity burn high-moisture fuels such as lignite and Powder River Basin subbituminous coal. The GRE dryer technology is potentially applicable to these units. Including the coal dryer in a new plant design could reduce the capital costs of auxiliary equipment and emission control systems. The dryer also may prove suitable for increasing the efficiency of gasifying high-moisture coals used as feedstocks.

The data reported in this article were produced with the support of the U.S. DOE’s National Energy Technology Laboratory under Award No. DE-FC26-04NT41763.