In the late 1980s, the U.S. Department of Energy (DOE), in conjunction with industry and state agencies, started the Clean Coal Technology (CCT) program. The aim of the CCT program was to develop technologies, increase efficiency, and reduce the environmental effects of burning coal in power plants. Today, pollution controls for new and existing plants include advanced combustion technologies and coal gasification – based systems These systems, developed under the CCT program in the 1980s and 1990s, are now successfully operating in many coal-fired power plants.

According to the Coal Based Generation Stakeholders Group (CBGS), a diverse group of CEOs of investor-owned utilities and rural electric cooperatives, all ultra-low emission coal-fired power plants that are expected to be commercially available between 2025 and 2035 would feature:

A major part of the Clean Coal Technology Roadmap (Roadmap) is the DOE’s plan is to develop technology needed for future coal-fired power plants and transportation fuels. The Roadmap was developed by the National Energy Technology Laboratory (NETL), the Coal Utilization Research Council (CURC), and the Electric Power Research Institute (EPRI). Table 1 shows the Roadmap’s goals.

The Roadmap does not include the cost and performance impacts of carbon and CO 2 sequestration. However, the long-term goal is to develop technology to mitigate CO 2 emissions. This could include geological, terrestrial, and biological sequestration. DOE’s FutureGen Project will accelerate the development of near-zero-emissions technology. FutureGen’s aim is to construct and operate a prototype gasification-based coal-fired power plant capable of capturing and storing one million tons/year of CO 2. In addition, the plant would have near-zero emissions of SO 2, NO X, and particulate matter.

Keeping Up with Demand

Currently, the U.S. has approximately 300 GW of coal-fired power plants in operation. To meet future demand, capacity additions will require not only new plants but also life-extension and replacement of existing plants. Figure 1 shows the capacity that would be needed if coal-fired power plants were required to be shut down and decommissioned once they reach 50, 60, or 70 years of operation. For example, if plants reaching an operating life of 60 years were to be shut down in 2020, the capacity needed to replace these plants would be approximately 50 GW. 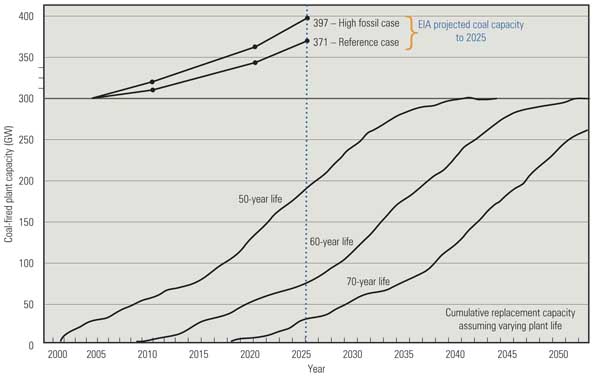 There are three areas where the operation of existing coal-fired power plants can be improved:

New coal-fired power plants that have advanced technologies are being developed for pulverized coal firing, fluidized-bed combustion (FBC) and IGCC. DOE’s Clean Coal Technology Demonstration Program is a government and industry co-funded endeavor to demonstrate a new generation of innovative coal utilization technologies. In order to prove their technical feasibility, and to provide information for future applications, all of the demonstration projects are carried out on commercial-scale plants.

According to the DOE, the demonstration program’s goal is to furnish the marketplace with a number of advanced and more-efficient coal-based technologies that are able to meet strict environmental standards. Successful demonstration programs are expected to minimize the economic and environmental barriers that limit the full utilization of coal for electric generation. Besides demonstrating the use of advanced pulverized coal, FBC, and IGCC technologies, other clean coal technologies being developed include multipollution reduction of flue gas emissions and mercury emission – reduction technologies.

Under DOE’s Clean Coal Technology Demonstration Program, advanced power systems will address the president’s Global Climate Change, Clear Skies, and Hydrogen Fuel Initiatives. This will be achieved by enhancing power generation efficiency, producing near-zero pollution emissions, the production of hydrogen, and CO 2 capture and sequestration. The advanced technologies will include IGCC, circulating fluidized bed (CFB) combustion systems, and advanced combustion techniques that will use oxygen in lieu of air. Chemicals will also be utilized to improve combustion.

One DOE-supported project is the Mesaba Energy Project, which will be located in northern Minnesota and begin generating power in 2011. This project was awarded in the second round of DOE’s Clean Coal Power Initiatives. However, contract details are still being negotiated.

Excelsior Energy Inc. will license, construct, own and operate the Mesaba Energy Project. According to Excelior, the Mesaba Energy Project’s integrated gasification combined cycle plant (Figure 2) is an example of the next generation of power generation facilities. It will be cleaner than existing coal plants and — because the plant will burn a variety of solid fuels, coal, petroleum coke, lignite, and other solid fuels that contain substantial amounts of carbon — the plant’s fuel costs will be more stable than if it used natural gas.

In addition, SO 2, NO X, Hg, and particulate matter emissions rates are to be equal to, or below, the current U.S. Environmental Protection Agency "lowest achievable emission rate" for coal-fired generation. The plant will have efficiencies that allow 15% to 20% less CO 2 than most coal-fired power plants.

A major element of the Mesaba project is to demonstrate ConocoPhillips’ next-generation E-Gas technology in an IGCC plant with a capacity of up to 600 MW. E-Gas’s gasifier features an oxygen-blown, continuous-slagging, two-stage entrained flow gasifier. When operational, the gasifier will convert a variety of carbonaceous feedstock (including coke, petroleum coke, and lignite) to a hydrogen-rich syngas and a vitrified inert slag. The solid fuels will be slurried and combined with 95% pure oxygen prior to it being injected into the first-stage gasifier. The gasifier will operate at 2,600F and 400 lb/in 2.

After removing any particulate matter and chlorides, the syngas will pass through a series of reactions to remove and convert sulfur into elemental sulfur. Elemental sulfur is a commercially marketable by-product. At this point, the syngas will be combusted in a gas turbine. Heat from the hot gas turbine exhaust will be extracted in a heat-recovery steam generator to produce steam for the plant’s steam turbine. When firing bituminous coal, the IGCC plant will have a thermal efficiency of approximately 8,600 Btu/kWh.

Because the Mesaba plant is expected to significantly outperform the efficiency and emissions of existing coal-fired power plants, its owners predict that it will be the cleanest coal-fueled power plant in the world.

Under DOE’s Clean Coal Technology Demonstration Program, Jacksonville Electric Authority’s (JEA’s) Northside Station, located in Jacksonville, Fla., repowered Unit 2 with a large-scale circulating fluidized bed. The unit was completed in December 2001 and final testing was completed in April 2005. According to the DOE, the overall objective of the project was to demonstrate the technical and economic viability of a coal-fired facility utilizing a Foster Wheeler CFB combustion boiler capable of producing 1.8 million lb/hr of 2,400 psig steam superheated to 1,000F. Other objectives included:

JEA’s major reason for participating in the project was to achieve a low-cost efficient and environmentally friendly coal-fired generating plant. Figure 3 shows a schematic of the JEA project. 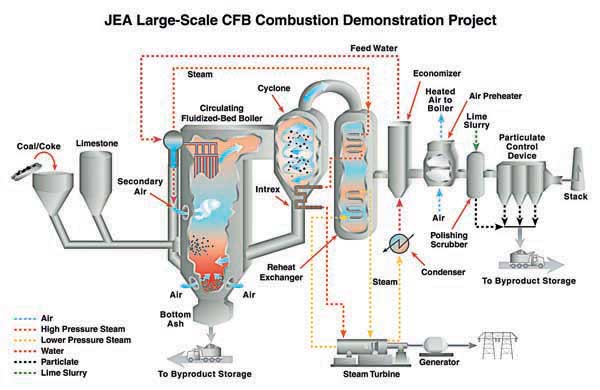 Originally, the fourth test was intended to be 100% petroleum coke, but the unit would not operate satisfactorily when firing it. When 100% petroleum coke was fired, there was an agglomeration of ash in the INTREX and cyclones. The INTREX of Foster Wheeler’s CFB contains the loop seal and the intermediate and finishing superheater surfaces. As a consequence, the test was modified to burn a blend of 80% petroleum coke and 20% Pittsburg No. 8 coal. Table 2 details the properties of fuels used in the performance tests.

Besides the ash buildup from 100% firing of petroleum coke, the project had other boiler problems during the testing program. These included drying and feeding problems with the limestone, stripper cooler plugging, expansion joint failure, and back sifting of dust into the primary air plenum. Density control and spray quality in the air quality control systems was also a problem. Most of these problems have been resolved with equipment modification and/or replacement and by changing operating procedures.

Although the average availability percentage in 2003 and in 2004 was not what was expected, the project has proved that a large-scale CFB boiler can be operated successfully. Once all of the problems experienced during testing have been rectified, the DOE believes that the unit’s availability should be significantly improved. During the testing phase of the project, the unit met or exceeded all of the design environmental criteria. NO X, SO 2, and particulate levels were very low, making this one of the cleanest coal-fired units in the U.S.

It is expected that the cost of electricity for a 300-MW CFB plant at a greenfield site would be 6 to 8 cents/kWh when burning bituminous coal costing $48/ton. However, if low-cost petroleum coke is available, the cost of producing electricity could be substantially reduced. In the DOE’s opinion, the low level of emissions and the ability to burn fuel blends containing a high percentage of petroleum coke should make CFB technology an attractive option for new units and the repowering of existing coal-fired units.