The 1990 amendments to the Clean Air Act require coal-fired power plants to reduce their emissions of the pollutant SO2. To do so, many have switched to, or are considering switching to, Powder River Basin (PRB) coal. Unfortunately, PRB coal has a tendency to leave excessive and tenacious deposits on boiler heat-exchange surfaces. Complicating the problem, the distribution of the deposits is far from uniform.

Unit outages and deratings caused by buildups of ash and slag plague the U.S. fleet of coal-fired power stations. The cost of buying replacement power amounts to billions of dollars per year.

Why do these problems occur? When a boiler is asked to burn PRB coal instead of its design fuel, the lower ash-softening temperature of the former tends to cause severe slagging problems. In turn, fouling and slagging of its heat-exchange surfaces reduce the efficiency and output of a boiler by overheating its banks of water and steam tubes. The consequences aren’t restricted to lower heat rate and production; if the clinkers on a boiler’s pendants become heavy enough, they can fall and damage bottom tubes.

All coal-fired power plants use a set of sootblowers to rid their boiler’s internals of ash and slag. The typical system is operated either once per set period of time or based on operator “intuition.” At some plants, sootblowing still is done once per day or once per shift, regardless of the unit’s operating regimen and history. Unfortunately, this “flying blind” approach often results in some areas being undercleaned, while others aren’t cleaned enough. Overcleaning has its own, economic drawbacks: excessive usage of steam, air, and/or water by the sootblower system.

A common strategy for removing tenacious deposits from the convection sections of a boiler is to increase the sootblowing pressure and frequency. But in many cases, doing so makes the cleaning system part of the problem rather than the solution, by increasing the risk of tube erosion caused by the sootblowing itself (Figure 1). 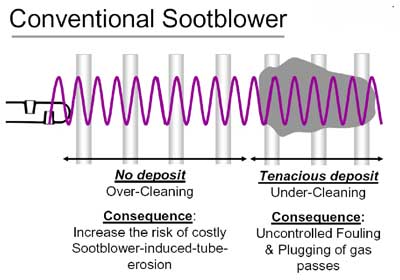 1.    Operating a conventional, “dumb” sootblower without regard for the location and amount of actual deposits has serious consequences. Source: Clyde Bergemann Inc.

To deal with these issues, many coal-fired plants are turning to automated, intelligent sootblowing systems that use sensors to detect the location and severity of actual slag and ash buildup. An algorithm converts the sensor readings to a set of operating parameters for individual sootblower lances. Some systems can even gauge the weight of buildup on boiler pendants and call for their cleaning when the buildup becomes excessive. The benefits of using an intelligent sootblowing system are significant: optimized cleaning (only where and as often as it is really needed), higher boiler and unit efficiency and availability, lower operating costs and emissions, and the ability to burn a wider range of coals.

Clyde Bergemann Inc.’s (www.clydebergemann.com) SmartSootblower system exemplifies the state of the art in the field. It is equipped not only with sensors of slag buildup, but also with motors that independently control the transverse and rotational motions of lances. Operators retain full control of the helical movement of each lance, and they are kept informed at all times of the exact position of the sootblower nozzles with respect to the banks of boiler tubes.

The cleaning effectiveness of the SmartSootblower system is optimized by adjusting its operating frequency and the pressure of its cleaning medium (steam or water). Doing so prevents, or at least minimizes, sootblower-induced tube erosion caused by overcleaning.

In the SmartSootblower system, the traverse and rotational motions of each lance are controlled by separate motors whose activating signals come from the plant’s sootblower control platform. Significantly, the speed of both motions is continuously variable. Varying the rotation speed of lances during a cleaning cycle minimizes imposition of unnecessary stress on already-stressed locations and concentrates cleaning where needed.

Guided by the system’s slag sensors, an operator can segregate boiler areas that require aggressive cleaning from those with little buildup. For each area, he or she can select the optimal traverse speed and rotational and helical motions of the lance aimed at it. This enables the operator to control precisely the aggressiveness of sootblowing across boiler zones and over the duration of the cleaning cycle.

Controlling the lances’ speed and aim also allows repeat cleaning of an area without having to retract the lances and begin another cycle. For example, the SmartSootblower system can be programmed to sequentially move to the fully inserted position, back out a few feet, and then return to full insertion. Such versatility maximizes the system’s ability to clean areas with lots of slag or ash buildup.

The system is as easy to retrofit and use as it is versatile. It has an open architecture and uses standard, leading-edge hardware and software. Troubleshooting is simple, and the system even can be monitored from a remote location—an important feature for utilities with a fleet of coal plants.

Coming Clean in the Midwest

For an example of the benefits of the SmartSootblower system, consider what its installation has done for a 700-MW coal-fired Babcock & Wilcox boiler powering a generating unit in a Midwest state. Two big problems arose immediately after the unit was converted to burn PRB coal: deposition and fouling. The ash deposits on secondary superheater inlet pendants were severe enough to cause “bridging.” The fouling was uneven; ash tended to accumulate more on the left side of the boiler.

Before the fuel switch, the unit had used a conventional sootblower with water lances to mitigate fouling in the boiler’s secondary superheater section. But use (and misuse) of the system had failed to eliminate, and possibly contributed to, frequent boiler tube failures that necessitated forced unit outages. Realizing the downsides of PRB coal, early last year plant management decided to buy and install a SmartSootblower.

For a while following commissioning of the system, its cleaning frequency had to be based on operators’ visual inspections of the boiler because the system had not been equipped with any sensors to monitor fouling. The subsequent installation of SmartGauges from Clyde Bergemann in stressed-out sections of the secondary superheater eliminated that shortcoming, allowing use of the system at its full potential. Feedback from the sensors also improved studies of the tendency for fouling in those sections.

SmartGauge, based a patented technology, uses a strain gauge to measure the stress on a pendant hanger rod. Tests have proven a strong correlation between the change in strain and an increase in deposit depth (Figure 2). 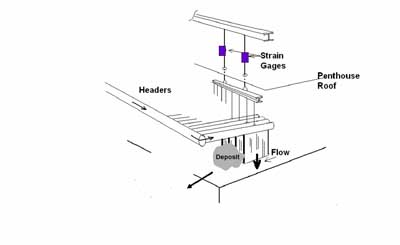 2.    SmartGauges monitor the growth of deposits by measuring the change in strain on hanger rods that it produces. Source: Clyde Bergemann Inc.

An intelligent sootblower can be run as a standalone system. But it also is possible to integrate one into an existing distributed control system (DCS) without having to drastically change either the DCS hardware or software. Coupling the two systems usually reduces the overall cost of retrofitting a coal-burning unit with advanced boiler cleaning technology.

—This item is based on a presentation by Danny S. Tandra, PhD and Sandeep Shah, PE of Clyde Bergemann at the 2007 ELECTRIC POWER Conference and Exhibition.

With four supercritical units, DTE Energy’s Monroe Power Plant (Figure 3) has a capacity of 3,100 MW, making it one of America’s largest coal-fired stations. To minimize fuel costs and plant emissions of SO2, Monroe blends PRB coal with Central Appalachian coals and mid- and low-sulfur eastern coal. The PRB coal represents about 60% to 70% of each unit’s feed. Three of the four units are equipped with selective catalytic control systems that remove almost all of the SO2 in their flue gas by converting it to SO3. 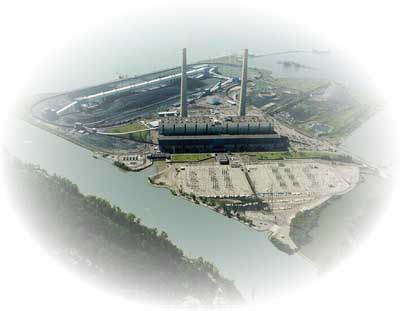 Several tools are used as part of a formal plant program to optimize the blending of fuels and the burning of the resulting feed. They include a digital fuel tracking system (DFTS), on-line analyzers of fuel quality, swirl-stabilized burners, and extensive pulverizer testing and combustion modeling.

In Monroe’s experience, when a unit is fed different fuels or fuel blends it is critical that its operators know what combustion parameters to adjust to compensate for the shift. Well-trained operators are essential to reducing slagging in the boiler. Accordingly, it’s also very important that the information on which they base operating decisions comes from well-maintained and calibrated instruments.

The System’s Eyes and Ears

The key adjuncts of Monroe’s DFTS are the on-line fuel quality analyzers. They monitor, in real time, the ash and moisture content, heating value, and base/acid and calcium/iron ratios of the four fuel feeds. A separate X-ray fluorescence analyzer and modeling program determines the optimal combustion parameters for each unit. Data is taken every 90 seconds and made available to shift supervisors, operators, and engineers. All have been trained to evaluate the complex outputs of the analyzer and modeling program.

Thanks to the DFTS, Monroe’s operators know exactly the quality of the fuel being burned. The system also tracks the quantity and quality of as-received coals stored in silos, and how much will be available for each of the next three hours of operation. The DFTS also monitors the following pulverizer parameters once a day:

Besides monitoring the pulverizers, the system also keeps track of the following combustion variables for each unit:

For each of these variables, plant management sets a limit and instructs operators not to exceed it. That’s because heat transfer within the boiler, its cleanliness, the position of the fireball within it, fuel quality, and the performance of the pulverizer and air heater all affect unit performance.

The formal fuel blending and combustion optimization program at Monroe Power Plant has enabled operators to maximize the percentage of PRB coal in fuel feeds and thereby minimize unit SO2 emissions. Another positive result of using the DFTS and other parts of the program has been fewer boiler upsets and unit derates caused by blending. Less slagging has meant fewer outages and a reduction in the need for sootblowing as well.

As mentioned earlier, the role of instrumentation in providing dependable, actionable information to control room operators cannot be overemphasized. For this reason, it’s critical that operators’ training on the proper use of the DFTS be ongoing, rather than a one-time event.

—This item is based on a presentation by Kerry R. Mclenon, a shift supervisor at DTE Energy’s Monroe Power Plant, at the 2007 ELECTRIC POWER Conference and Exhibition.