Synfuels’ political bubble has burst in Washington, but the market may step in where Congress fears to tread.

When coal industry interests, in the form of the CTL Coalition, got a bill with strong federal support for coal-to-liquids technology before the Senate this spring, it appeared that the political skids were greased for some kind of loan guarantee, price support, or like subsidies. The CTL Coalition includes mining companies, the United Mine Workers, local governments, and some big consumers.

The Senate measure had bipartisan support, including Republican Jim Bunning of Kentucky and Democrat Barack Obama of Illinois. In the House, a similar measure was sponsored by two coal state legislators: Reps. Nick Joe Rahall (D-W.Va.) and Rick Boucher (D-Va.), a force on the Energy and Commerce Committee.

Opposing the bill were some strange political bedfellows: environmentalists, who hate anything coal-related for their greenhouse gas emissions, and small-government conservatives. A Wall Street Journal editorial argued, "The coal-to-liquids subsidy rush is one more sign that taxpayers will be the biggest losers in our current energy panic. Our politicians will even subsidize carbon-emitting coal in the name of reducing dependence on carbon-emitting but unsubsidized oil. The ‘alternative’ fuels campaign is on its way to becoming the biggest corporate welfare scheme in U.S. history."

Significantly, the oil industry also lobbied against the coal-to-liquids bills, realizing that getting transportation fuels from coal means less demand for gasoline and diesel. Big oil, the greens, and the conservatives were enough to counter the considerable strength of coal and labor.

While rare, the alliance of greens and the "less government is better government" crowd has precedents. In the 1980s, they scuttled one of President Jimmy Carter’s major energy initiatives, the Energy Mobilization Board, designed to streamline federal permitting of energy projects. The same coalition worked successfully to defeat the Reagan administration’s push to develop the Clinch River Breeder Reactor.

Ironically, the Carter administration also sought to kill the Clinch River project because it considered the plant wasteful and unnecessary. Congress rescued it. A few years later, Reagan supported the project, which was meant to be built in Tennessee. Congress, specifically the Republican-controlled Senate, where Tennessee’s Howard Baker was majority leader, killed the project once and for all in 1984.

The last time Congress put the muscle of the federal government squarely behind synfuels development — the 1980 Energy Security Act, a signature of Carter’s presidency — the results were disastrous. No true coal-to-liquids projects emerged. The U.S. Synthetic Fuels Corp., a quasi-governmental organization formed to develop alternatives to imported oil, collapsed in 1985, just as world oil prices began a precipitous dive.

What did emerge from the 1980 law was a so-called "synfuels" tax dodge that allowed producers to pour oil over coal and claim a tax credit. That was a pernicious provision, sloppily written by Congress, which allowed legal, multi-billion-dollar gaming of the tax code in the name of bogus synthetic fuels projects.

To be fair, the 1980s and 1990s did produce some advanced coal technologies. For example, the Reagan administration had the U.S. Department of Energy (DOE) start a clean coal demonstration program to get Canada to stop complaining about acid rain crossing the border. Although the program had serious problems, it did manage to move some coal gasification technologies beyond the concept stage.

A Mere Drop in the Barrel

Earlier this year, coal interests, seeing skyrocketing gasoline pump prices (though still less than the peaks of the 1980s, in adjusted dollars), seized what they thought was an opening to revive coal-to-liquids subsidies. But they misread the politics, as they often have in the past.

Congress passed an "omnibus" energy bill in 2005 after "only" a decade of effort. But less than two years later it became so spooked by the rising price of gasoline that it attempted to ease pressures on gas supply by promoting synfuels as an alternative to Mideast oil.

Two proposals were deemed too costly to make sense. This June, when the Senate took up another comprehensive energy bill, the chamber first rejected an amendment to provide direct federal incentives for making liquid fuels from coal. Next, it tabled a scaled-down amendment that would have provided loans for coal-to-liquids projects.

Then the Senate passed the stripped-down energy bill, which ups efficiency standards for cars and trucks and also boosts the politically untouchable biofuels mandate, by a comfortable 65-27 margin. As a political response to the high gasoline prices of spring and summer 2007, the Senate’s coal-to-liquids bill is small beer. Few analysts believe that its passage will have a significant impact on pump prices or market dynamics.

Among the elements not in the Senate package was a federal renewable energy portfolio standard that would require utilities to get a specified percentage of their supply from renewables. The Senate also rejected an amendment from Sen. John Warner (R-Va.) that would have permitted oil and gas exploration off his state’s coast.

John Fialka, a savvy Wall Street Journal reporter who has covered the Washington energy scene for 30 years, wrote that the Senate debate "underscored the tension between global-warming concerns and attempts to reduce the nation’s reliance on imported oil. The vote results were a victory for environmental groups," which opposed the two CTL amendments and Warner’s offshore drilling rider.

Not All Politics Are Local

Meanwhile, the House energy package appears bogged down in a dispute between Speaker Nancy Pelosi of California and the so-called "Old Bulls," the chamber’s veterans, who think Pelosi lacks strategic leadership skills. Their complaint is that Pelosi is more interested in appearing "green" to her San Francisco constituents than in advancing a national agenda that recognizes traditional Democratic Party supporters, including labor.

Chief among Pelosi’s adversaries is Rep. John Dingell (D-Mich.), chairman of the crucial House Energy and Commerce Committee. Dingell has served in the House since 1955, when he succeeded his father in a seat that serves a large portion of automaking Detroit. Dingell has so far stymied Pelosi’s attempts to put the finishing touches on a House energy bill, in order to set up a House-Senate conference committee to iron out differences on the two measures.

This spring, Pelosi vowed passage a House bill by July 4. That didn’t happen. Now she’s talking about bringing something to the floor before the August recess, but insiders deem that unlikely. So when the House and Senate return in September, the Democratic leaders will have to thread an energy bill through a legislative maze just as they and the White House begin to knock boots in a steel-cage death-match over Iraq policy.

Pelosi and Dingell have been circling each other carefully, looking for openings. So far, Dingell seems to be winning, because the official House bill under consideration has no mandate for higher vehicle gasoline mileage standards, in line with Detroit’s desires. Pelosi backs the Senate’s 35-mpg plan but has been unable to insert it into House legislation. "Dingell has Pelosi hog-tied and hornswoggled," said one veteran observer of Washington energy politics.

Dingell also has stymied Pelosi on global warming legislation. Pelosi created a special committee — the Select Committee on Energy Independence and Global Warming — to address the climate-change issue. To mollify Dingell, she didn’t give the select committee authority to write legislation. Score another for Dingell.

The new select committee is chaired by Rep. Ed Markey (D-Mass.). He’s a long-time Dingell ally (although simultaneously an Al Gore acolyte on warming). Markey owes much of his success climbing the House hierarchy to Dingell, who advanced the younger Massachusetts liberal throughout his career. Under the terms of the creation of the select committee, Markey can’t bark until Dingell says, "Speak."

When Pelosi created the committee, Dingell snorted that it would be "as useful as feathers on a fish." So far, he’s right. The betting is that the 110th Congress won’t get to global warming legislation in this first session of its two-year run. Congress likely will publicize the issue with fanfares, trumpets, and 21-gun salutes in 2008, for an obvious reason: It’s an election year. But the chances of passing anything will be quite slim, for the same reason.

As Washington again trips over itself on energy policy (as it has for the past seven years, starting with Vice President Cheney’s stupidly surreptitious crafting of an energy policy plan in 2001), the market may come to the rescue. The solution may not be coal-to-liquids, but coal-to-gas.

The coal giant Peabody Energy and the Houston-based oil and gas major ConocoPhillips in late July announced a deal to explore a mine-mouth project to turn coal into synthetic natural gas (SNG). In a press release, the two companies said the project "would be designed to annually produce 50 billion to 70 billion cubic feet of pipeline-quality SNG from more than 3.5 million tons of Midwest sourced coal."

The project would be at an as-yet unspecified site where, according to the press release, "Peabody has access to large reserves and existing infrastructure." The release added that "presuming there is a supportive regulatory framework in place, the project scope will provide for carbon capture and storage."

The companies said they hope to complete a preliminary design and economic assessment for the project in "early 2008." ConocoPhillips and Peabody added that they are willing to share ownership of the project with "other potential equity partners." According to Peabody CEO Gregory Boyce, his company’s vast coal reserves offer "strategic advantages for coal-to-gas projects and other Btu conversion projects."

In a 2006 report, the National Coal Council called for using 350 million tons of coal to provide at least 15% of U.S. natural gas supply, or 4 trillion cubic feet, in the future. Conoco CEO Jim Mulva said the project with Peabody "would be designed to deliver over 1.5 trillion cubic feet of SNG in its first 30 years of operation from proven, domestic coal reserves."

The project would use Conoco’s E-Gas gasification technology that it bought from Global Energy Inc. in 2003. That technology originated at Dow Chemical, where it was known as the "Destec Gasification Process." It is at the heart of the successful 262-MW Wabash River integrated gasification combined-cycle plant in Indiana.

Wabash River was one of the DOE’s Clean Coal Technology round IV projects selected for federal support in 1991 (Figure 1). Construction started in 1993, and the plant began operating in 1995. The successful federal demonstration ended in January 2000. The plant has continued in baseload operation since then. 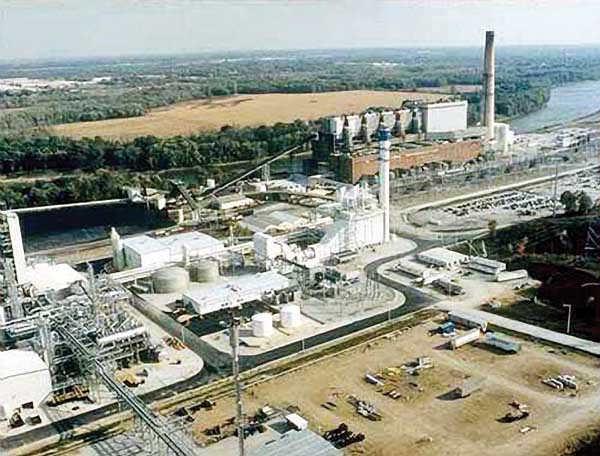 Whether Conoco and Peabody can make a go of their ambitious coal gasification plan depends on a lot of moving parts moving in the right direction. But, unlike those in Congress, the companies’ parts are moving.