A £4.4 million grant by the UK’s Department of Energy and Climate Change (DECC) this September to Clipper Windpower’s Britannia project kicked up a whirlwind of interest in the supersized wind turbine—and others being developed around the world.

The California-based company has been developing a monster 10-MW prototype turbine for eventual installation at a new 4,000-square-meter (43,056-square-foot) facility on the River Tyne in northeast England by 2011. Once constructed, Clipper claims that each turbine blade will be more than 70 meters long and weigh more than 30 metric tons. The turbine itself will rise 175 meters high, making it one of the largest in the world. The massive turbine is built on the architecture and technology of Clipper’s Liberty 2.5-MW turbine, containing a gearbox with multiple high-efficiency permanent magnet generators. 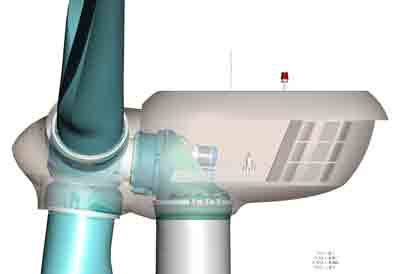 Mighty big wind. Clipper Windpower is developing a 10-MW offshore wind turbine prototype. When deployed in late 2011, as expected, in at a facility on the River Tyne in northeast England, the turbine may be one of the world’s largest. Courtesy: Clipper Windpower

The grant follows an April 2008 purchase of the Britannia prototype by The Crown Estate—a property portfolio owned by the Crown—to allow the body overseen by the UK parliament to “gain firsthand knowledge of the challenges facing the development of wind turbines for deep water marine deployment.” Its vested interest is anchored in development of its vast territory—which includes almost the entire UK territorial seabed of about 12 nautical miles. Recently, it has been leasing the seabed on the continental shelf within the Renewable Energy Zone (which extends out to about 200 nautical miles) for renewable generation projects.

Installing a wind turbine of this size poses logistical problems, Clipper admits. These include locating manufacturing operations on the UK coast for proximity, floating blades and other turbines to the site, and then hoisting them onto the tower.

But these issues may not necessarily delay deployment of the prototype, as Enercon has shown with its giant 6-MW Enercon E-126—a land-based turbine that towers 198 meters high and features a rotor diameter of 126 meters. As of May 2009, the German turbine maker had erected eight turbines, including the 2007 prototype. Currently, 11 turbines are being erected at a wind farm north of Estinnes-au-Mont municipality, in Belgium. The erection of each supersized turbine at the facility owned by Belgian developer WindVision requires almost double the personnel required to install a 2-MW turbine—between 100 and 120 people. 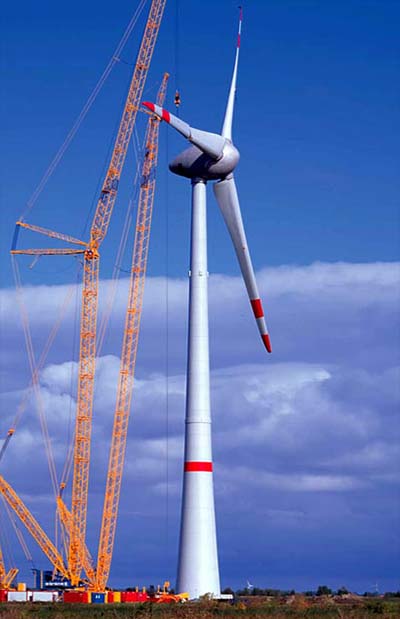 Nose in the air. Development of several supersized turbines is under way all over the world. The land-based Enercon E-126 wind turbine, developed by German company Enercon currently holds the record for being the world’s largest. Courtesy: Enercon