GE Renewable Energy has made major gains in orders for its 5.3-MW Cypress onshore wind turbine and the 12-MW Haliade-X offshore wind turbine. Prototypes of both are still being tested in the Netherlands.

The GE business division introduced the first turbine in the Cypress platform, a 4.8-MW machine, in September 2017, and it launched the 5.3-MW turbine (and officially named the mega-turbine platform) in September 2018. A 5.3-MW prototype, which was installed in Wieringermeer, Netherlands, in late 2018, produced its first kilowatt this February, and GE says testing in support its Type Certificate will wrap up soon.

The onshore wind platform is notable because it is powered by an innovative two-piece carbon blade design from GE subsidiary LM Power that enables blades to be manufactured at longer lengths. GE is marketing the turbines with multiple ratings and varying hub heights to lower costs of power by “by matching each wind turbine solution to specific site needs.” That, it says, is critical “as wind power increasingly competes on price with other sources of power generation.” The newly launched 5.3-MW turbine—which can produce more than 20 GWh a year—promises a 50% increase in annual energy production (AEP) over GE’s 3.X platform life, and a 4% increase in AEP over the 4.8-MW turbine, it claims.

Interest in the Cypress platform appears to have ramped up. The first order for the Cypress platform came from German firm Prowind GmbH, which ordered three 4.8-MW units for the Elfershausen project in Germany in April. That project is slated to come online at the end of 2019. In August, GE secured its first order for the 5.3-MW machine from Australian investors Partners Group and CWP. The firms ordered 46 units to be installed at the 244-MW Bango wind farm in Australia, a project that will come online by 2021.

Early in September, GE also bagged an order for 33 5.3-MW Cypress turbines for the 175-MW Björkvattnet wind farm in Sweden. On Sept. 30, GE inked a contract with Turkish power company Sanko Enerji to supply 4.8-MW units for the 51-MW Gazi 9 Wind Farm in Turkey. On Oct. 8, it signed onshore wind contracts for 25 Cypress turbines with EDF Renewables for the Ventos da Bahia wind farm in Brazil.

Race for the Most Powerful Onshore Turbine

According to the U.S. Department of Energy’s (DOE’s) August 2019–released “2018 Wind Technologies Market Report,” the average rated nameplate capacity of newly installed wind turbines in the U.S last year was 2.43 MW—up 5% from the previous year, and 239% since 1998. In Europe, according to WindEurope, the most powerful onshore wind turbines are installed in Norway with an average rating of 3.6 MW.

As the DOE noted, average wind turbine capacity, rotor diameter, and hub height have consistently increased. “In 2008, no turbines employed rotors that were 100 meters in diameter or larger; in contrast, by 2018, 99% of newly installed turbines featured rotors of at least that diameter. In fact, 87% of newly installed turbines in 2018 featured rotor diameters of greater than or equal to 110 meters, with 30% of turbines having rotors greater than or equal to 120 meters,” it noted.

GE Renewable Energy, meanwhile, wants to accelerate commercial launch of its mammoth 12-MW Haliade-X  turbine in 2021. Over the past few weeks, it secured two customers in the U.S. and the UK with major clout in the offshore wind business.

The contract is a significant triumph for GE because the two wind farms will mark the world’s first commercial deployment of the Haliade-X. This is especially notable because GE pioneered a 6-MW Haliade turbine at the 30-MW Block Island Wind Farm (a 2017 POWER Top Plant), which came online in 2016 as the U.S.’s first offshore wind farm. 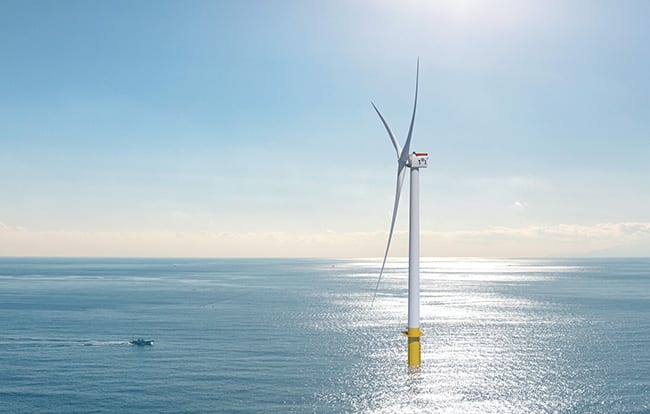 On Oct. 1, GE revealed another lucrative deal to become the preferred supplier for Dogger Bank Wind Farms, which is a 50:50 joint venture between Equinor and SSE Renewables. The joint venture has proposed three 1.2-GW projects located in the North Sea, about 130 kilometers from the UK’s Yorkshire Coast. All three are qualified for the latest Contracts for Difference (CfDs) Allocation Round, the UK government’s auction for renewable power.

GE said the final number of turbines to be installed at Dogger Bank will “be confirmed in due course,” but it expressed excitement at securing a customer for the massive turbine in the European market. “We have an important role to play in the UK’s offshore wind ambitions and in delivering further carbon emission reductions. Our Haliade-X technology is helping our customers to make offshore wind a more competitive source of clean and renewable energy by reducing the levelized cost of energy (LCOE),” said John Lavelle, president and CEO of GE Renewable Energy’s Offshore Wind division.

As Dogger Bank Wind Farms Project Director Bjørn Ivar Bergemo noted, if completed as envisioned, the Dogger Bank project will have a combined capacity of up to 3.6 GW—making it the largest wind farm in the world. Though the Haliade-X “represents a step change in turbine technology,” the joint venture’s success in the CfD auction was “due in large part to the relationships we have built with our supply chain, which enabled the lowest ever strike prices,” he said.

For now, however, project developers must make a financial investment decision by the end of 2020. That decision will officially confirm GE’s role in the project as turbine supplier. If all goes well, onshore construction of Dogger Bank could begin in early 2020 and be completed by 2023.