A fiberglass-reinforced plastic FRP/Halar stack liner was installed at Vattenfall’s 300-MW Unit 2 at the Nordjylland Power Station in 1995. The 112-meter-high (367-ft) stack, protected from corrosion by the ECTFE liner, is still in excellent condition and has not required any repairs during more than 13 years of service. (ECTFE is short for ethylene chlorotrifluoroethlyene polymer, marketed under the brand name Halar ECTFE [Halar] by Solvay Solexis.)

The original power station was built in 1977 and was designed to supply energy to Denmark’s North Jutland region. During 1991 the plant was upgraded with a SNOX-exhaust (sulfur and NOx abatement) gas treatment system by Haldor Topsoe Engineering.

In addition, a new 112-m-high concrete stack (with an inside diameter of 4.6 m), internally protected with 100-mm-thick (3.9-inch), state-of-the-art acid-resistant brick, was erected (Figure 5). 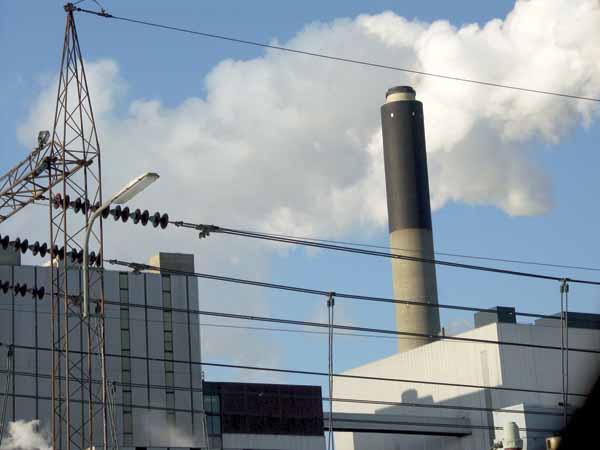 5.    No longer a problem. Vattenfall’s 300-MW Nordjylland Power Station Unit 2 experienced significant deterioration in its brick liner caused by extremely corrosive exhaust gases. In 1995 the 112-meter-high stack was relined with an FRP/Halar liner that remains in as-new condition to this day.  Courtesy: Solvay Solexis

The power plant was originally designed to burn crude refinery residue with high sulphur content — a very difficult range of operating conditions for the stack liner (Table 1). In fact, the condensation formed on the stack liner is sulfuric acid with a concentration of 70% to 80%. 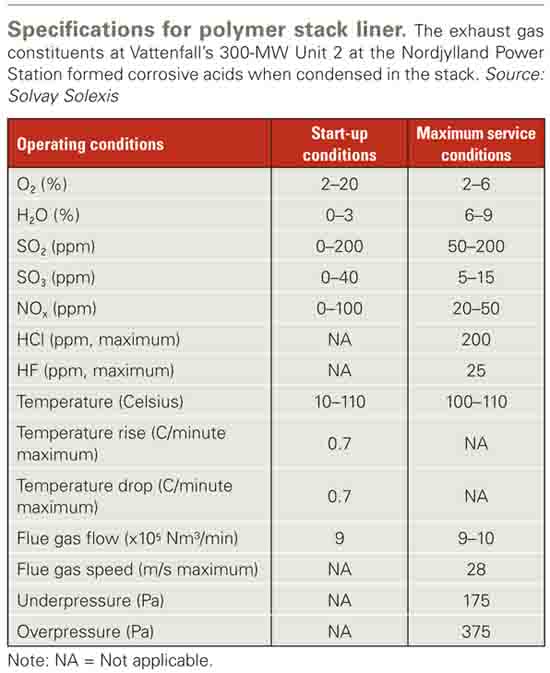 Shortly after the SNOX-exhaust treatment was installed, operators discovered that the acidic condensation was attacking the "acid resistant" inner brick lining and forming large quantities of aerosol particles that detached from that lining. In addition, acidic droplets were carried up the stack by the high-speed flue gas. Those airborne solid particles, together with acidic droplets, settled over a wide rural area around the plant.

Selection of the Brick Liner Replacement

During 1995, Nordjylland decided to install additional de-misters and provide the chimney with a new trouble-free acid-resistant inner liner. Based on the maximum operating conditions of the flue gas, 110C (230F), and the presence of sulphuric acid, a high-performance thermoplastic fluoropolymer was needed to resist the extremely corrosive conditions inside the stack.

The plant owner selected Halar as the best option. Its choice as a corrosion protection liner was primarily based on its good chemical resistance and excellent permeation resistance to chemical compounds produced during the burning of crude oil. Other factors considered were the outstanding abrasion resistance and the exceptional surface smoothness of the ECTFE polymer.

The available chemical resistance data show that the ECTFE resin performs very well when exposed to concentrated inorganic acids. The Halar resin retains most of its mechanical properties and is not chemically attacked when exposed to 98% sulfuric acid at 140C or to 65% nitric acid, 49% hydrofluoric acid, and 37% hydrochloric acid at 100C after 30 days of immersion tests.

The good chemical resistance of the resin does not guarantee that the liner can provide sufficient corrosion protection. If the permeation rate is high, a substantial amount of chemicals passed through the liner will chemically attack the fabric backing and the substrate to which the liner is attached, causing failure of the structure.

The ECTFE resin was selected because on its excellent permeation resistance to water and acids, one of the best of all fluoropolymers, at temperatures as high as 100C.

Installation of the Halar/FRP Liner

Tunetanken, the Danish FRP fabricator, was selected to do the fabrication of the Halar inner liner. The 4.3-m-diameter/112-m-high stack was relined with seven modular sections, each about 14 m high. The Halar/FPR sections were prefabricated using 2.3-mm-thick Halar fiber-backed sheets from Quadrant (formerly Symalit), which were assembled to a total height of 92 m. The individual prefabricated sections were introduced and lowered into the chimney from the top by a crane capable of operating at heights of 120 m or higher (Figure 6). 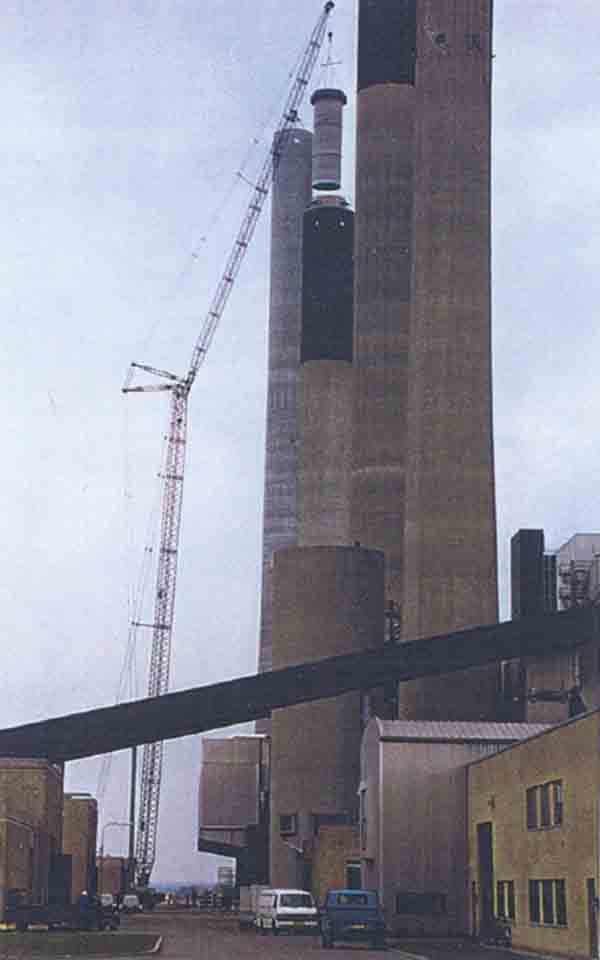 Each Halar module was constructed with a male socket sleeve at the bottom, which fit the female top of the section below. These sockets were then bonded in place with high-temperature adhesive, and the various modules were welded together by experienced PRP welders, operating from scaffolding platforms mounted inside the stack. (In 1995, Tunetanken was relatively new to Halar lining and welding; consequently, Halar expertise was provided by subcontractor PRP from Finland.) The total weight of Halar ECTFE resin used to produce the fiber-backed sheet of 2.3-mm nominal thickness for this project was estimated to be 5 metric tons.

Initial work started at the end of August 1995, and by October 1995 the stack was ready to enter service.

Start-up of the power station with its new stack liner took place in November 1995. Since then, the plant has operated between 80% and 90% of the time. No maintenance or repairs have been performed since the liner was installed. Inspection of the chimney stack performed by Tunetanken personnel in September 2006 confirmed that the Halar liner was in excellent condition and looks practically new (Figures 7 and 8). 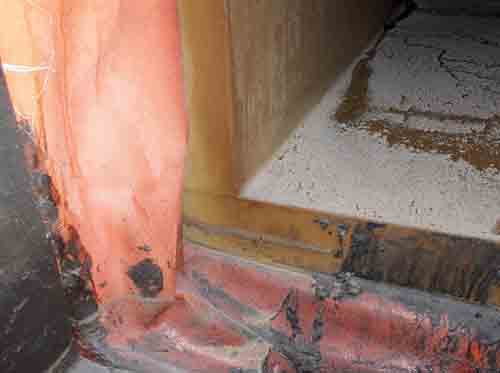 7.    Just like new. The light brown discoloration of the Halar polymer at the inlet of the chimney and on part of the flexible joint was caused by exposure to the high-temperature gases exiting the furnace. However, this discoloration did not affect the polymer properties, and the liner maintained its excellent corrosion protection properties. The black stain visible on the edge of the inlet is a paint used for other parts of the chimney. The white residue present on the bottom of the inlet was easily wiped off. Courtesy: Solvay Solexis 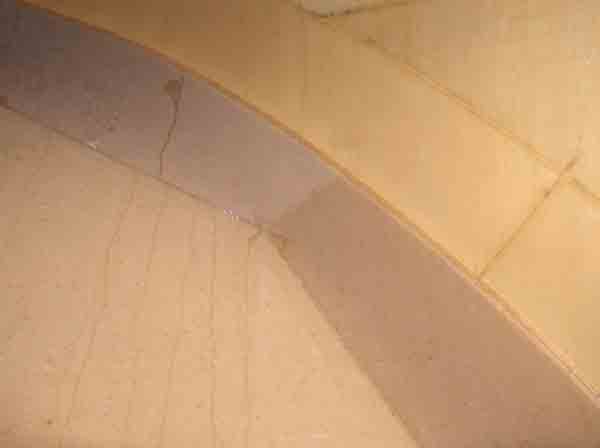 8.    Smooth sailing. Inspections of the manhole and the bottom part of the chimney during a September 2006 inspection confirmed that all parts of the liner showed no signs of chemical attack on the ECTFE resin by the chemically aggressive exhaust gas and that no cracking was present on the surface of the liner. Courtesy: Solvay Solexis

The liner was further evaluated by the Danish Technological Institute (DTI) in 2008. Results of the DTI evaluation showed that the liner was in excellent condition after approximately 13 years of service. The DTI’s conclusions were summarized in the May 2009 letter from Mr. Torben Martens Knudsen, project manager of DTI’s Plastics Technology: "Samples taken from the ECTFE lining of the stack at Nordjyllandsvaerket Power Plant have been tested last year. Two drilled out samples were taken at level 24 and analyzed using infrared-spectroscopy at test samples taken from inside surface and from the middle part of the lining. There were no signs of degradation of the polymer. Polished cross-sections of the samples were examined in microscope; a darker color was observed in a depth of 0.1 mm from inside surface. The joint between lining and glass fiber-polyester layer was fully intact. It was concluded that the ECTFE-lining was not influenced by the service conditions after approx. 13 years of service."

[Editors’ note: Minor corrections in product naming were made to the online version of this article 12/10/09.]