CPS Energy’s J.K. Spruce Power Plant, Unit 1 was recently recognized by the EUCG Fossil Productivity Committee as the best performer in the large coal plant category over the 2002-2006 evaluation period. The competition was tough, with more than 80 plants in the running, but Unit 1 emerged as the clear winner by earning top points for high plant reliability and very low nonfuel O&M costs.

The selection criteria for the best performer are simple and equitable in concept but require a rather lengthy statistical exercise. All the coal-fired power plants from EUCG member utilities submit cost and reliability data for the sample years, in this case 2002 through 2006. The cost data cover operations and maintenance (O&M) costs on a $/MWh basis, and reliability data are calculated from an agreed-upon definition of equivalent forced outage factor: forced outage hours, plus equivalent forced derated hours divided by the sum of service hours, plus forced outage hours, plus equivalent forced derated hours during reserve shutdown. The data are then corrected to factor out variables such as plant rating, capacity factor, and number of units on the plant site to create a level playing field. Each plant is then ranked in both of the categories, and those rankings are then combined to determine the overall winner. 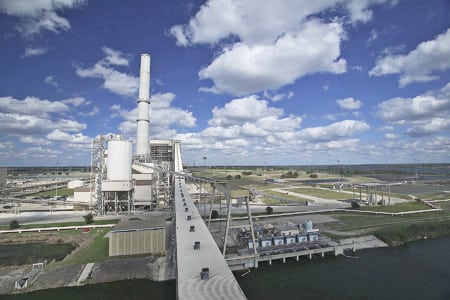 1. Top of its game. J.K. Spruce Power Plant, Unit 1 has the distinction of being the last coal-fired power plant built in Texas. It entered commercial service in December 1992. The EUCG Fossil Productivity Committee recently recognized the plant as its large coal best performer over a five-year period. Courtesy: CPS Energy

With more than 5,400 MW of net generating capacity, CPS Energy is the nation’s largest municipally owned energy company. Its Spruce plant entered commercial service in December 1992 and enjoys the distinction of being the last coal plant built in Texas (Figure 1). It’s also a single-unit plant, at least for the next couple of years. Construction began on a 750-MW Unit 2 in 2006. That unit will join the CPS Energy fleet in 2010 to help keep pace with Greater San Antonio’s fast-growing demand for electricity (see sidebar). The new unit will be larger than the three existing CPS Energy coal-fired units located at Calaveras Lake (the other two units are at the nearby J.T. Deely plant) and is being constructed adjacent to Unit 1. Approximately 41% of CPS Energy’s electricity needs is generated by these three units.

CPS Energy has commenced construction on a new coal-fired plant at Calaveras Lake. It will be the first new coal plant built in Texas since 1992, when J.K. Spruce Power Plant, Unit 1 entered service. When completed in 2010, Unit 2 of the Spruce plant will be capable of generating 750 MW.

The last hurdle to build the plant was overcome when the Texas Commission on Environmental Quality approved the plant’s permit in 2006. Environmental groups fighting the plant dropped their opposition after CPS agreed to step up its conservation and renewable energy goals. CPS Energy has agreed to raise its target for energy efficiency and conservation to 771 MW by 2020 and for renewable energy capacity to equal 20% of peak demand, also by 2020.

“Spruce 2 is going to have the best available emissions control technology in the United States,” said Mayor Phil Hardberger, who also serves on the CPS Energy Board of Trustees. Spruce 2 is being built by Calaveras Power Partners, a consortium led by Zachry Construction Corp. that also includes Black & Veatch, TIC, and Utility Engineering.

Spruce 1 is a youngster compared to the more than 30-year average age of U.S. coal plants. Its tangentially fired steam generator, operating at 1,005F/1,005F and 2,400 psi, was supplied by Combustion Engineering (now Alstom Power) and features six levels of tilting burners with five required for full-load operation. The burners were subsequently retrofitted with low-NOx burners in 1999, and in 2007 a separated overfire air system was added for additional NOx reduction. 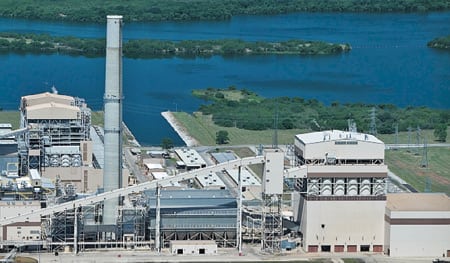 Perhaps the most comprehensive upgrade was the plant’s migration to Emerson’s Ovation distributed control system (DCS) and turbine control system retrofit to optimize boiler and turbine control operations. Spruce 1 was originally configured with Emerson’s WDPF, a modern system when it was purchased more than 15 years ago but long in the tooth by today’s standards, especially if your goal, like CPS Energy’s, is to extract every possible megawatt-hour from your generating assets.

Fortunately, Emerson’s upgrade process is reasonably straightforward and allows users to keep their existing I/O cards, cables, field terminations, and cabinets. Advantages also flow to the operations staff, as their investment in control logic, graphic screens, and database design is preserved. The upgrade replaced the original boiler, balance-of-plant, and scrubber controls; the data acquisition functions of the DCS; and the GE steam turbine controls. Controls for the solid fuel-handling system, boiler feed pump turbines, and coal-handling systems were added to the new Ovation system’s work load. The upgrade installation was fully implemented by April 2007.

CPS Energy purposefully keeps its plant O&M staffing levels lean to optimize the balance between work requirements and keeping costs low. If you ask Senior Manager Jeff Kruse, it’s all about having the right people in just the right numbers. Kruse leads the plant’s 68-person staff, which includes five salaried managers plus 37 operators who work 12-hour shifts on a 35-day rotation schedule. The 26-member maintenance staff has the many diverse skills needed in a power plant environment and includes welders, machinists, electricians, I&C techs, and utility workers. The maintenance staff works four 10-hour days with a skeleton crew on Fridays and Saturdays for six-day coverage (Figure 3). 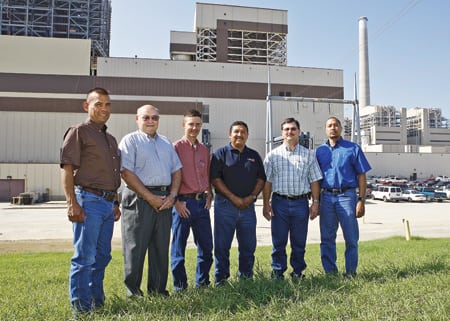 When asked about what specific actions the plant staff have taken to maintain their plant’s high availability and reliability numbers, Kruse points to the quality of his staff and their willingness to do whatever it takes to keep the electrons flowing. Kruse also noted that he is fortunate to have many employees who have been with the plant since start-up, and most average more than 20 years of utility experience.

Kruse highlighted several advantages Spruce 1 has over other power plants. For one, his staff isn’t alone when problems strike. For example, if Spruce 1 experiences a forced outage, then overhaul and maintenance staff at other CPS Energy locations are within a 25-mile radius and can be called in 24-7 to assist his staff in restoring service. The typical call-in worker response time is two hours. Also, CPS Energy’s Engineering Technical Services staff is located on site to provide essential technical support. In essence, Kruse is able to draw on the accumulated expertise and experience of all the CPS Energy facilities to rectify any unexpected problems.

The other implicit advantage Spruce 1 has is its young age and the fact that it was originally designed for cycling duty rather than for the baseload service it provides today. Also, Spruce 1 was originally designed with redundancy in many of its major systems to avoid single component failure-caused forced outages. A good example is the wet flue gas desulphurization system: Three absorber towers were specified, yet only two towers are needed to meet permitted SO2 removal rates.

The plant is at the top of CPS Energy’s list of least-cost of production plants, which explains the utility’s continuing investment in improving the plant’s reliability and efficiency.

Kruse cites additional examples, such as variable frequency drive updates to the condensate pumps as well as the plant’s forced- and induced-draft fans to improve the operating efficiency and responsiveness of boiler controls. Additionally, the plant is in the process of upgrading components on its submerged scraper conveyor to improve bottom ash handling. A plant simulator also is under development that will offer new operators the opportunity to exercise a virtual plant before actually touching a switch in the control room. The simulator also will allow experienced operators to hone their skills under more complex emergency conditions.

Kruse is committed to involving employees in finding and reporting problems in the plant. There is a culture of taking ownership of the plant’s problems and developing solutions rather than just dropping a maintenance request form in a “suggestion box,” as is so common in other plants. Kruse believes a highly disciplined and respected plant staff is vital to bringing solutions to the table rather than problems seeking answers.

Spruce 1 has adopted a computerized lockout/tagout (LOTO) system, even though such systems are controversial in the industry. Many from the plant O&M staff were involved in the difficult decision to move to a computerized LOTO system and carefully considered its many pros and cons. After much discussion the staff selected a particular software program that has the potential to reduce the complexities of the LOTO process, and therefore labor costs, without compromising worker or equipment safety.

Kruse emphasized that workplace safety is his highest priority as a plant manager, but responsibility for safety must be a shared. The plant has a Safety Advisory Team composed of members from the O&M organizations who identify and address plant safety issues. The plant also uses a “People Based Safety Program” that encourages direct peer feedback. After all, safety is the common responsibility of every plant employee.