Coal-fired plant owners were caught between the metaphorical rock and hard place in 2012. The “rock” was new regulations promulgated by the U.S. Environmental Protection Agency during the year, such as the Utility MACT rule, that will require additional capital investment and will make efficient and economic plant operations more difficult in the future. The “hard place” was the relatively low price of natural gas that has pushed coal-fired generation out of the resource mix in some regions. Stretching the metaphor further, coal plants and their owners may be dented, but many of the plants continue to perform like new. Today, coal still fuels about 42% of the nation’s annual production of electricity.

Beginning in 2010, Navigant introduced an annual Operational Excellence Award for coal-fired generation plants in North America based on data collected from Navigant’s proprietary Generation Knowledge Service (GKS) fossil database. The award program is designed to recognize excellence in cost-efficient and reliable plant performance over a five-year period. The program methodology, award recipients, and many of the factors noted by the recipients as being key to their success are discussed below.

To be eligible for consideration, a plant must have continuous data submitted to GKS for the entire five-year period. To ensure an apples-to-apples comparison, the data is screened to identify any unusual circumstances that could skew the evaluation, such as plants that have significantly altered their financial and/or operational status due to announced unit retirements. For evaluation purposes, non-fuel operation and maintenance (NFOM) costs include replacement capital to eliminate the effect of company capital accounting practices.

The objective of the evaluation criteria is to recognize plants that demonstrate the following characteristics:

Efficient NFOM Cost Management. This attribute is measured using Navigant’s proprietary normalized cost index. NCI is a ratio of a plant’s actual NFOM cost to the predicted cost for the five-year period. The predicted cost is based on a unit-level NFOM multivariate regression model, which includes more than 450 coal units. The cost model utilizes anywhere from 8 to 10 statistically significant independent variables, including such factors as:

The model is very well-behaved, exhibiting an adjusted R-square value of anywhere between 88% and 92%. To determine the NCI value for a given plant, the actual NFOM plant level spend is divided by the sum of the individual unit-level predicted NFOM values. NCI values greater than one suggest the actual NFOM spend is greater than the predicted value, while values less than one suggest the actual NFOM spend is less than the predicted value. For each plant size category, the plant-level NCI values are ordered from lowest to highest to determine the plant rankings in efficient NFOM cost management.

High Availability. A plant-level EAF is calculated for the five-year period according to the NERC/GADS weighted (capacity-based) performance index pooling unit calculations. The plant-level EAF values are ordered from high to low within each plant size category to determine the rankings for the availability component.

Improving Reliability Trend. This component of the evaluation seeks to reward plants that have demonstrated improvement in their reliability over the five-year evaluation period. EUOR was chosen because it incorporates both forced and maintenance outages and derates and is based on actual demand similar to the equivalent forced outage rate (EFOR) calculation. A quarterly plant-level EUOR value is calculated and plotted over the five-year period. The slope of the simple regression line is used to quantify the rate of improvement or degradation in plant reliability. Negative slopes indicate an improving trend in reliability, and positive slopes indicate a degrading trend in reliability. The regression slopes are ordered from low to high to determine the plant rankings in the improving reliability category.

Predictable Reliability Performance. This feature was included to capture the negative impact that high-impact/low-probability (HILP) events have on overall performance. It is a subtle measure and is not weighted heavily relative to the other three components in the overall ranking. It is determined by measuring the amount of variability that exists in the quarterly EUOR data mentioned above. Higher measures of variability are usually associated with HILP-type events. The variability measure is ordered from low to high to determine the plant rankings for this category.

Safety. Following discussion with our GKS Steering Committee members, it was decided to include safety as one of the criteria for selecting the award winners. The safety component is based on the plant nonhearing-related OSHA recordable incident rate. In evaluating this measure, Navigant had previously gathered safety performance data for each station and ranked them from best performance down. The selection criterion applied was that the station must fall within the top 50% of plant safety performance to be considered further for the award. Note that there were some top-performing plants, based on the other evaluation criteria, that failed to make the cut on safety, though most were marginally below the cut line.

Each of the five measures listed above is weighted according to overall importance as determined by the GK client-based steering committee, and it varies slightly among the three size groups. For example, the availability/reliability measures are weighted somewhat higher for the large plant category in recognition of the fact that these units typically have higher margins and are more strategically significant than units in the small plant category. Once the weighting factors are assigned, an overall combined ranking index is computed within each plant size category. The plants are then ordered from best to worst, and the top two plants in each category are selected for recognition.

Operational Excellence Award recipients for the 2007–2011 evaluation period were recently announced (Figure 1). The six plants averaged over 90% EAF, 2.1% EFOR, and a NFOM spending efficiency of 30% less than the NFOM cost model predicted value for the five-year evaluation period. The winners are: 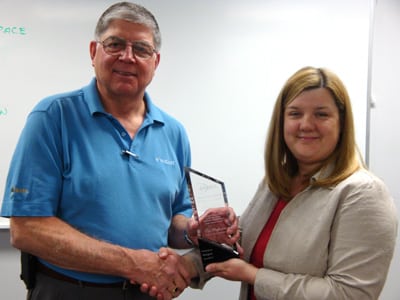 As part of the Operational Excellence Award program, Navigant invites several of the award recipients to give presentations in our annual GKS User meetings to describe some of the key factors that have made them successful. While each plant demonstrated a slightly different approach, some common themes and principles were mentioned, many of which are included in Navigant’s Best Practice Plant Assessment Guide. Although the Operational Excellence Award is based on hard data, each plant exhibits high human performance standards and expectations; is process-oriented, data-driven, and proactive; and is willing to take calculated risks and challenge the status quo. Most importantly, each exemplifies a very high regard and recognition for individual workers and their contribution to the overall success of the plant.
Here are some of the key success factors presented at the meeting:

—Dale Probasco is a managing director and Bob Ruhlman is an associate director in Navigant’s Energy Practice.