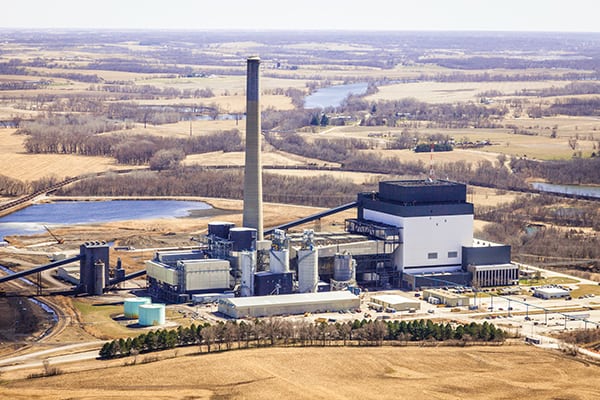 Alliant Energy recently completed a major renovation of the Ottumwa Generating Station to improve air quality, plant reliability, and efficiency. By doing so it also reduced its carbon footprint by ~5.6%.

On August 3, 2015, the U.S. Environmental Protection Agency finalized its proposed Carbon Pollution Standards for Existing Power Plants (known as the Clean Power Plan, CPP). The stated purpose of the CPP is to reduce CO2 emissions in the power sector by establishing unique state target emission rates to be met by 2030. The targets are based on the “best system of emission reduction,” which uses three “building blocks” designed to “cost effectively” and “efficiently” reduce CO2 emissions.

In 2010, Alliant Energy began the arduous process of developing a new long-term energy resource strategy that would rebalance its power generation portfolio to ensure its ability to provide reliable, cost-effective service for the next 30 years. Alliant Energy’s Iowa utility announced in August 2012 its strategy, which included, in part, retiring older, less-efficient coal-fired generating stations; burning more natural gas instead of coal; and renovating strategically important coal-fired stations to reduce emissions and increase efficiency. A key milestone was reached on January 12, 2012, when the Iowa Department of Natural Resources issued the Ottumwa Generating Station (OGS) a PSD Construction Permit to allow construction of the air quality control system (AQCS) and other efficiency improvements.

OGS is an important electricity resource for Alliant Energy, and will remain one, well into the future. Located about 100 miles southeast of Des Moines, the unit was previously rated at 675 MW nominal output and features a single unit that burned Wyoming Powder River Basin coal in a Combustion Engineering (now Alstom Power) tangentially fired boiler, installed in 1981. The boiler, operating at 2,400 psig, 1,005F/1,005F superheat and reheat steam temperatures, was equipped with low-NOx burners and was originally installed with a hot-side electrostatic precipitator (ESP) for particulate control. Seven mills supply fuel to seven levels of burners in the boiler. The boiler also features two levels of separated overfire air to stage combustion to reduce NOx. An Emerson Ovation distributed control system handles the plant’s automation tasks, and a NeuCo neural net and historian provide real-time combustion and boiler cleaning optimization.

The OGS project is a model for simultaneous emissions reduction, capacity increase, and plant efficiency improvements.

The required upgrades at OGS were substantial. First, the emissions reduction portion, detailed below, was significant. Second, Alliant’s Comprehensive Asset Management Program (CAMP) was created to improve plant safety, optimize plant heat rate, and improve plant reliability. A key portion of the project was to modernize the existing steam turbine, which included replacement of all four of the turbine rotors and associated steam path components. Alliant Energy completed additional efficiency and reliability improvements that were identified and completed as part of CAMP.

Burns & McDonnell (B&M) was retained by Alliant Energy to assist in the overall development of CAMP. Over a period of eight months, a comprehensive cost/benefit analysis review of more than 50 potential projects was conducted. Sixteen of those were selected for implementation based on net present value and individual contribution to project goals.

The AQCS and nine CAMP projects were awarded to a joint venture corporation (BWM) formed by B&M and Babcock & Wilcox (B&W) under a $400 million fixed price engineering, procurement, and construction contract. B&M handled engineering, procurement, and startup services, while B&W was responsible for construction execution. However, BWM was not parochial in its selection of supervision, as it used the “best athlete” approach to staffing the project—the best person, regardless of organization, was given the job. Alliant Energy self-performed seven of the CAMP projects. HDR served as the owner’s engineer.

The AQCS project included the addition of spray dryer absorbers (SDAs) for SO2 reduction, an activated carbon injection (ACI) system to reduce mercury (Hg) emissions by 90%, and a pulse jet fabric filter (PJFF) for improved particulate removal, which were designed, engineered, and supplied by B&W. The SDA was added downstream of the air preheater so that flue gases would flow first through the existing hot-side ESP, then the air preheater, the SDA’s two absorber modules, the new PJFF, and up through the stack. Fly ash collected in the ESP continues to be sold for beneficial use.

Detailed engineering, fabrication, and construction of the SDA scrubbers began in 2012 and was completed in November 2014. Startup and commissioning began following the 76-day tie-in outage. Since startup, Alliant Energy has conducted preliminary testing that demonstrates the ability of the SDA to reduce SO2 to prescribed levels (>90% removal) and the ACI system and baghouse to remove Hg (>90%) and particulate material to the levels required by its operating permit and federal Mercury and Air Toxics Standards. Additional NOx emission control equipment is scheduled to be constructed and in operation by the end of 2019.

Myriad boiler improvements, designed and supplied by B&W, were also completed during the outage in order to restore steam generation performance and improve reliability (Figure 1). For example, the economizer, finishing reheater, superheater division panels, lower waterwall slope, and select sootblowers were replaced so that design steam conditions could be reliably maintained. Also, the reheater outlet headers, header tee, header guides, and terminal tubes were replaced for improved reliability. Air preheater baskets were replaced with a two-layer design for improved thermal performance by reducing exit gas temperature by 30F. Overall, there was no change in the boiler nameplate performance.

The most significant CAMP project was the Toshiba International Corp. steam turbine and generator upgrades to improve turbine heat rate and turbine generator reliability. The increase in plant capacity was the result of the increased efficiency of the upgraded steam path. In sum, the high-pressure, intermediate-pressure, and low-pressure A and B rotors and inner shells were replaced and the generator stator was rewound. The turbine generator was upgraded from its original nameplate 675 MW rating to 790 MW gross. Turbine supervisory instrumentation was also upgraded to allow for improved data collection for monitoring and trending. Installation was completed during the same 76-day outage.

Other balance-of-plant improvement projects were also completed as part of the CAMP. For example, additional instrumentation was added to the condenser for performance-monitoring purposes, which produced the data necessary to justify a condenser upgrade to improve noncondensable air removal. Also, a Taprogge condenser tube cleaning system was added to provide an improved, more consistent condenser heat transfer surface—even on hot summer days—thus reducing steam turbine backpressure.

Startup of the boiler and upgraded steam turbine were completed without complication, and the plant was released for dispatch on November 12, 2014, eight hours ahead of a very aggressive project schedule. Performance testing of the new and improved OGS demonstrated that the $491 million investment would continue to pay dividends to Iowa customers for many years. While plant output increased from 675 MW (net) to 705 MW (net), net plant heat rate decreased from 10,675 Btu/kWh to 10,081 Btu/kWh—a stellar 5.6% decrease, which also equates to an ~5.6% decrease in CO2 emissions. Emissions permit requirements were also met during the testing period.

Many owners of coal-fired power plants are wondering how the Clean Power Plan will affect future operations. OGS is an exemplar of how a coal plant can reinvent itself in the face of increased environmental regulation while reducing CO2 emissions in advance of CPP compliance deadlines. OGS will remain a reliable source of cleaner, low-cost power for decades to come. ■