Today’s economic realities have forced many owners of combined cycle plants to transition from baseload to cycling operation—perhaps cycling the plant every day to catch emerging power sale opportunities. Many manufacturers have responded with equipment upgrades to meet this demanding service. In the case of heat-recovery steam generators (HRSGs), some manufacturers have raised their startup ramp rates to as high as 50 psi/min—but just because you can push them that far doesn’t mean you always should. HRSGs subjected to high cycling operating profiles are affected by thermal stress, water chemistry (notably dissolved oxygen), other operational considerations, or all of the above.

If the approach temperature is low—less than 10F—there is potential for economizer steaming. Since most HRSG economizers are either panels or serpentine style, steaming can create major problems. It may cause water hammer and vapor lock in some economizer circuits, causing high local velocities in some tubes and performance degradation of the entire economizer section. If the approach temperature is high—more than 10F above its “as-designed” value—the diagnosis may be economizer underperformance, one of today’s burning HRSG operational issues.

How Startups, Bad Designs Cause Stress

The steady-state thermal stresses in HRSG economizer tubes are normally quite low because the temperature differences between connected parts of the economizer are small. However, some HRSGs’ operating modes could produce very high stresses in the economizer—stresses that will ultimately lead to tube fatigue failure. It shouldn’t be a surprise that these stresses reach their maximum magnitude during startup.

In addition to material stresses and fatigue failure, there are other stresses related to HRSG designs and operating constraints:

Of the various cycling-related problems bedeviling economizers, pass-to-pass stress—which results when a hot economizer gets “quenched” by a slug of cold water—is the most common, best understood, and most readily corrected (see the sidebar “Preventing and Managing Cold Surges”). This type of stress can be damaging even at differential temperatures as low as 150F. Tube wall thickness is not a major factor, but tube bank geometry is, because poor geometry can produce inadequate flexibility and points of stress concentration.

HRSG designers employ a number of techniques to prevent cold surges or to minimize their effects. One of the simplest and most effective methods is to maintain a small flow of water through the economizer section during startup by opening the intermittent blowdown drains on the steam drum. Even a small flow should be sufficient to prevent the section from rising to a damagingly high temperature. Although this method consumes water, it is has the advantage of having a low hardware cost. And it can even be implemented in existing plants without making any equipment modifications.
Designing and building a forced recirculation system for the economizer is another way to keep its temperature from spiking during startup. Although such systems have a higher capital cost because they need pumps and valves, they save water, compared to the approach of maintaining a small flow through the economizer.
In multi-pressure HRSGs, the overall temperature rise in the economizer section can be reduced by placing lower-pressure sections between higher-pressure sections. For example, a designer might place an IP superheater section just downstream of the HP evaporator and just upstream of the HP economizer.
This technique lowers the gas temperature entering the economizer section, in turn reducing the temperature difference between the feedwater and the hot tubes during no-flow conditions at startup. A lower temperature difference reduces the stress impact of a cold surge. Because there are many performance and efficiency tradeoffs involved in the application of this method, it is only possible to employ it in a new design.

During the early stages of an HRSG startup, there is no steam being produced in the HP evaporator and hence no demand for makeup water. With no demand for water, the feedwater control valve supplying the economizer is closed; hence, there is no water flow in the economizer. Under these conditions, the temperature of the gas entering economizer sections immediately downstream of the boiler/evaporator sections will be higher than the evaporator’s saturation temperature.

The economizers of all types of HRSGs are vulnerable to the stresses of economizer quenching. The maximum stresses occur in different places (see the sidebar “Fatigue Damage to HRSG Tube-to-Header Joints”), depending on the style of HRSG construction and the means used to restrain the part’s thermal growth, some of which are illustrated in Figures 2 through 5. The transient events that cause the thermal growth that creates the stresses may be short-lived, but they nonetheless shorten the economizer’s available fatigue life each time they occur. 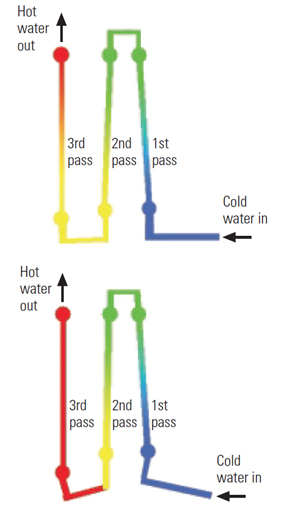 2. Single-row, panel-style construction. This schematic shows shrinkage of the first two passes as the cold surge reaches the end of the second pass. This motion puts stress on the incoming line and the panel-to-panel jumper pipes. Source: Deltak LLC 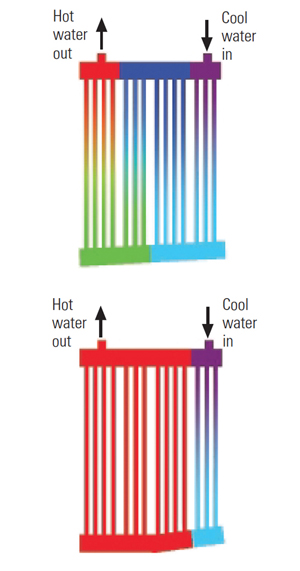 3. Multi-lateral pass style of construction. Shrinkage of the first pass as the cold surge reaches the end of the pass creates loads in the tubes in the first and second pass. 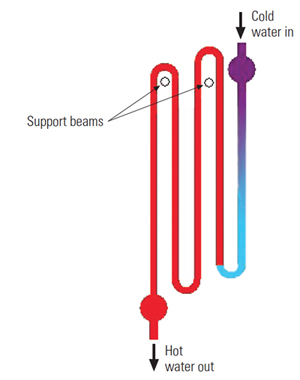 4. Return-bend style. This style of economizer is supported by hanger beams under the upper return bends. When the first-pass tubes shrink, they try to lift the remaining passes off their hanger beam, inducing stresses. Source: Deltak LLC

5.Vertical flow. A vertical gas flow HRSG with a horizontal water flow serpentine circuit will experience shrinkage of its first-pass tube when the cold surge reaches the end. When the first-pass tube shrinks, it will try to pull the entire array toward itself. Source: Deltak LLC

Fatigue Damage to HRSG Tube-to-Header Joints
The greatest stress in an economizer generally occurs when a cold surge passes through it. Cold surges create temperature differences between adjacent tubes. The cooler tubes go into tension as they contract more than their warmer neighbors. This tension is increased or intensified at points where the tube geometry changes, for example at the toe of the fillet weld. The intensified stress is what drives fatigue damage.
A typical fatigue failure in a tube-to-header joint is illustrated in Figure 6. This fracture was produced in a fatigue-testing machine that replicates HRSG loads on full-scale tube-to-header joints. This one has been opened up to illustrate its location and features of the fracture surface. However, the typical crack is so narrow that is invisible to the naked eye (Figure 7). 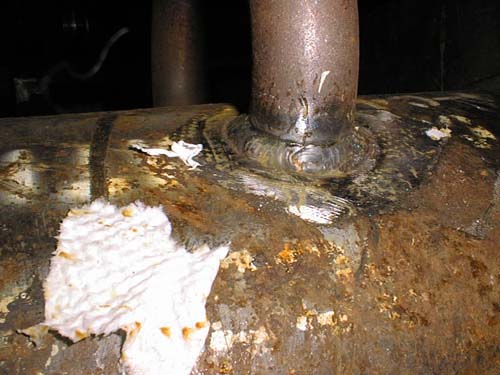 6. Fatigue failure in tube-to-header joints can be almost invisible to the naked eye. Courtesy: Deltak LLC 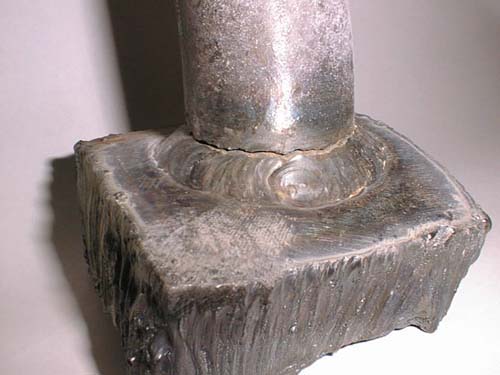 7. An Inside view. The same fatigue failure with the joint opened up to illustrate its location and surface features. Courtesy: Deltak LLC 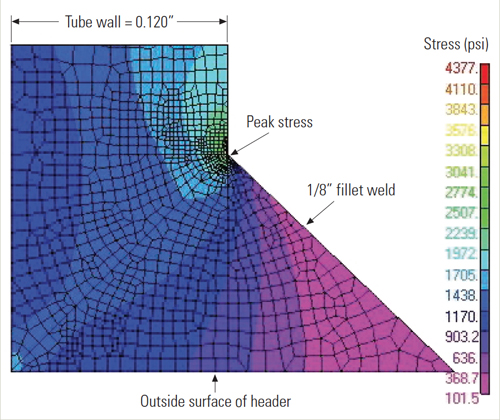 8. Where the failures are. Finite element analysis indicates that the fatigue failures of tube-to-header weld joints are always at the top of the filet—where the peak stresses are. Courtesy: Deltak LLC

Very little information about stress intensification factors for tube-to-header joints can be found in the published scientific literature. To fill this void and allow accurate estimates of HRSG fatigue life, Minneapolis-based Deltak LLC built a machine for full-scale fatigue testing of typical HRSG tube-to-header connections. During the past two years, this machine has been used to evaluate five different tube-to-header weld configurations:
Testing on the machine is continuing with the objective of establishing a reliable database on joint performance under fatigue conditions.

Once an HRSG in startup begins to generate steam in its HP drum, demand for cool makeup water will be created and the economizer feedwater valve will open. But because feedwater temperatures for typical HRSG HP economizers are in the range of 250F to 300F, the incoming front of cool water could be several hundred degrees colder than the warm economizer tubes. Regardless of the economizer’s style of construction, when this cold surge of water contacts the hot tubes, it will cause high thermal stresses. The good news is that these stresses don’t last for long because economizers are designed to reach steady-state conditions quickly.

In a system that is operating properly, there will be only one cold surge event during each startup. So even if a plant is started up 300 times a year, it would experience no more than 300 of these extreme thermal events annually. It is indeed possible to design an economizer to withstand cold surges of this number and frequency.

However, if the system is not operating properly, all bets are off. For example, should the economizer’s feedwater control system malfunction, the feedwater control valve might oscillate between fully open and fully closed many times per hour. Under these conditions, if the HRSG economizer was designed for 300 cold surge cycles per year, it would see a year’s worth of fatigue cycles in just 30 hours if there are just 10 full swings in control valve position per hour.

Discussions with the operators revealed that the control valve for the bypass cooling water had been operating erratically for some time. It would drive itself to either the full-open or full-closed position, at which point manual intervention by the operator was required. When the valve was returned to automatic operation, its control response would eventually degrade again to the full-open/full-closed behavior.

The staff of the Louisiana plant immediately made a short-term fix until they could resolve the bypass control valve problem. What they did was limit the valve no more than 12% open—more than enough to meet the cooling demand for the economizer bypass circuit but at the same time closed enough that cold surges would be able to mix with the warmer flow and avoid excessive tube cooling. Since implementing this fix, the HRSG has run for three years without another economizer tube failure.

Note that in a case such as this, where excessive cycles have been inflicted on a piece of equipment, eliminating the source of excessive cycling does not immediately result in fewer failures. The affected tubes may have already suffered a high number of cycles, and although the rate of cycling is reduced by the corrective action, the tubes may have already lost a large portion of their fatigue life.

Experience with other HRSGs and discussions with plant operators have revealed that excessive feedwater valve cycling and associated tube failures due to malfunctioning controls happen more often than would be expected. If your HRSG is having failures in its economizer tubes, one of the factors that should be investigated is the functioning of the feedwater flow control. If the control valve cycles between open and closed more than once during a startup or is cycling open and closed during steady-state operation, it will create excessive thermal cycles and accelerate the rate of fatigue damage in the economizer.