The name "Alaska" comes from the Aleut word "alaxsxaq," meaning "an object toward which the action of the sea is directed," in this case the Alaska Peninsula. But alaxsxaq is also sometimes loosely translated as "the great land."

The Anchorage, Alaska–based Chugach Electric Association (CEA), incorporated in 1948, operates and maintains a combined-cycle plant in one of North America’s coldest climates. The company began with its post-WWII purchase of a shipwrecked tanker whose boiler and generator were adapted to bring reliable electricity service to nearly half of the city of Anchorage. Since then, Chugach Electric has grown into the largest electric utility and power generator in the state. Its service territory now extends from Anchorage to the northern Kenai Peninsula and from Whittier on Prince William Sound to Tyonek on the west side of Cook Inlet. Chugach Electric also provides power to Alaskans from Homer to Fairbanks through sales to wholesale and economy energy customers.

Chugach Electric owns and operates three thermal power plants, and operates and is part owner of two hydro stations. The utility’s total installed capacity is about 530 MW. Load swings are 60 to 80 MW during the course of a typical day. Following are the five plants, by name and capacity:

The Beluga plant (Figures 1 and 2) is remotely located across Cook Inlet, 40 miles due west of Anchorage. To the northwest, 30 miles away, is the Alaska Range, home to an active volcano that continues to make its presence felt. So have the wildlife. Operators have long become accustomed to the occasional visit from a moose or a black or brown bear. 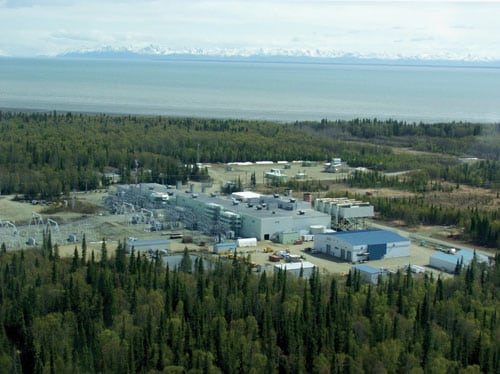 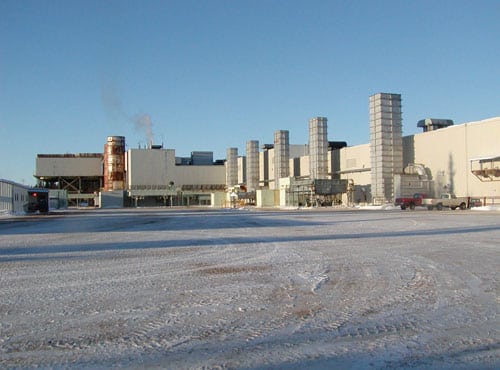 No roads connect Beluga to any part of Alaska’s major highway system, making the plant accessible only by barge or aircraft. Its gravel road parallels an airstrip on which all personnel, equipment, and supplies arrive. The privately owned airport accommodates single- and twin-engine aircraft on a regular basis as well as larger aircraft such as the Hercules C-130. Barges ship larger heavier equipment and cargo across Cook Inlet (Figure 3). With normal bay tides in excess of 30 feet, tidal damage to the barge landing must be repaired after every winter/spring thaw. 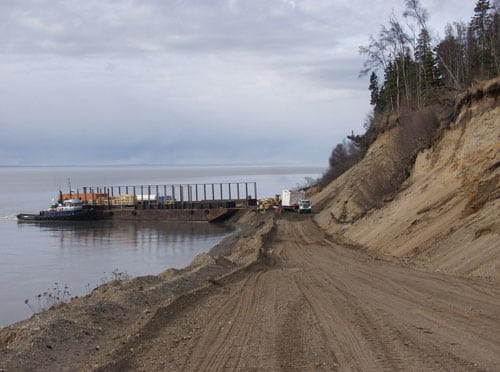 3. One if by sea. A new rotor for one of Beluga’s ABB-11DM gas turbines arrives at the site’s barge landing. The landing must be rebuilt each summer after the spring thaw erodes most of the roadwork. Courtesy: Chugach Electric Association Inc.

Data have been compiled from dozens of combined-cycle plants on all continents. As of December 2005, Tetra’s HRSG reliability database contains data from more than 50 plants, including failure data on more than 100 HRSGs.

The first reports on the project were issued in December 2005; the next reports will be published in June 2006. The 2005 reports identified important trends in failures of tubes in high-pressure superheaters, reheaters, boilers, and economizers.

In 2006 the HRSG Reliability Project will update the database and address the failure experiences of other important components, including drums and headers, piping, supplemental firing systems, desuperheater attemperator systems, and structures such as ducts, supports, and stacks.

A typical December 2005 report is available at www.tetra-eng.com/ service_crs.php. For more information, contact Peter S. Jackson at pjackson@tetra-eng.com or 860-651-4622.

The newest, indoor ABB-11DM units (Figure 4) at Beluga were installed in the late 1970s, just as utilities began to deploy the first combined-cycle plants in search of higher efficiencies and lower heat rates. Remarkably, the units incorporate some design features common in today’s modern HRSGs. Among them: 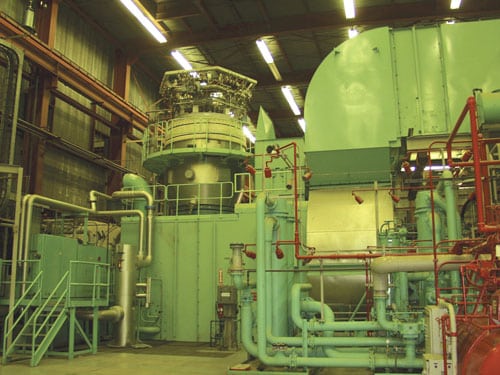 4. An oldie but goodie. The gas turbine powering Beluga Unit 6 is an ABB-11DM installed in the late 1970s. Courtesy: Chugach Electric Association Inc.

The two GE Frame 5s at Beluga are capable of black starts, thanks to the diesel engines with which they were equipped. This makes the other units black-start-capable, but only indirectly.

Other challenges are provided by Mother Nature. Mount Spurr, an 11,000-foot volcano about 30 miles to the west of the plant, last erupted in September 1992. The event threw enough ash into the air to force the closing of Anchorage International Airport. As a consequence, Beluga was completely isolated for a while and had to dip into its inventory for the plant’s necessities: food for the operators and inlet air filters for the gas turbines.

Not to be outdone, Mount Augustine, about 200 miles to the south, erupted in January of this year. This event has not yet produced any ash fallout at the plant, but it has diverted commercial and local air traffic from their normal routes. Two other volcanoes are situated between Spurr and Augustine: Mount Redoubt, which last erupted in 1990, and Mount Iliamna, which has remained dormant over the past century. Because of these and other natural hazards Chugach Electric keeps Beluga well-stocked with supplies at all times.

Chugach does use OEMs and/or independent contractors to repair some of the equipment at its plants as well as to refurbish certain gas turbine components. At Beluga, many of the repairs to gas turbine components are done on-site. For example, plant maintenance personnel use an on-site machine from IRD Balancing (Worthington, Ohio) to check for blade imbalances prior to installation of a new rotor on an ABB-11DM (Figure 5). The same technicians also repair gas turbine components such as combustion liners, transition pieces, turbine blades, vanes, and nozzles. Rotor and vane carrier rebuilds are completed on-site with refurbished or new parts, and Chugach maintenance crews have even coated compressors and restacked rotors at Beluga. Aiding the cause is a well-equipped on-site machine shop. Gas turbine disassembly and assembly during major overhauls is performed by plant maintenance personnel. 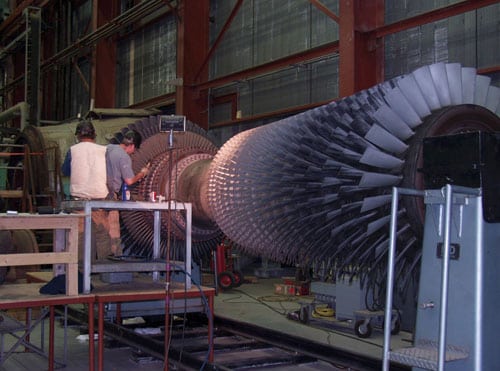 After more than 25 years of service, the combined-cycle unit at Beluga—like many elsewhere (see box)—continues to present challenges to efficient O&M. Mechanical wear has caused HRSG tube leaks that have required weld repairs (Figure 6). Because cracking of the high-pressure-steam attemperator liner in each HRSG has been endemic, technicians recently installed inspection ports to facilitate borescope inspections (Figure 7). Highly stressed structural components—particularly in the high-temperature region near the gas turbines’ outlets—require annual inspections and repairs. Since they were upgraded, both combined-cycle turbines now must be operated with their bypass stacks partly open to maintain the temperature of steam piping below its design value. This practice has increased stresses and cracking damage. 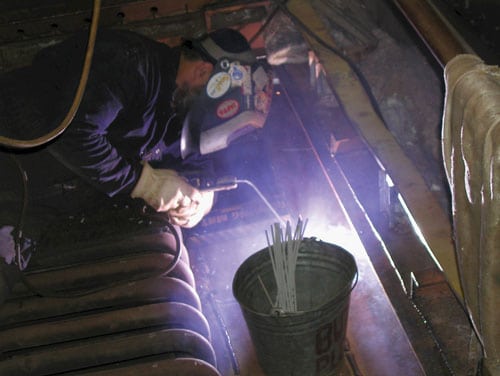 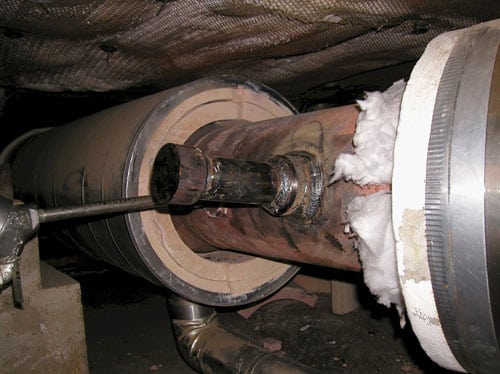 Water chemistry is maintained and monitored entirely by Beluga’s on-site staff. The bronze impellers originally specified for boiler feedpumps have led to copper deposits in the steam system. The presence of copper suggests that the carbon steel components of the plant’s steam systems have corroded. However, the contents of the steam turbine condenser have remained copper-free. Boiler and steam plant water chemistry is maintained by a conventional program based on the use of phosphate and amines.

At Beluga, corrosion damage required the low-pressure deaerator to be removed from service in 2004. A modification was made to provide low-pressure deaeration using the remaining high-pressure (HP) deaerator/storage tank. This was made possible only by a previous upgrade to the makeup water demineralizer system. The remaining HP deaerator components are subjected to thorough annual inspections that comply with NACE guidelines.

Flow-accelerated corrosion (FAC) wear is a common long-term problem at any combined-cycle power plant, and Beluga is no exception. Indeed, the plant’s HRSGs include some carbon steel components that operate near the peak temperature for FAC wear damage (Figure 8). Difficulties with maintaining pH above recommended minimums, and years of operation with carbohydrazide (eliminated in the 1990s), have fostered long-term wear. More-recent operation has been at higher oxygen levels, and that has been beneficial, from an FAC perspective. 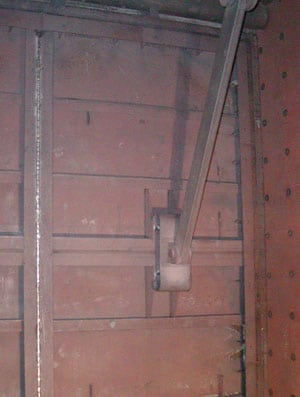 Annual inspections of the HRSGs and related boiler piping components suggest changes in component wall thickness. In addition, a "guided-wave" inspection performed in 2004 provided a general screening of the thickness of main steam piping and helped in the assessment of the condition of other large-bore piping components. As a contingency, spare HRSG tubes were ordered and kept on-site should Beluga suffer a forced outage during the winter, when weather hampers or prevents cargo delivery.

Between two shifts, the Beluga plant has a staff of 50 craft and six management personnel. These two shifts rotate on a week-on, week-off schedule. The O&M crew comprises well-trained mechanics, machinists, instrumentation and control technicians, electricians, operators, and warehousemen. The crew and most supplies are brought to the plant by air.

Work orders are handled by the Cascade utility work management system from Digital Inspections (Corvallis, Ore.). A recent arrival at Beluga, the software suite also is used to input and record timesheet entries. Chugach orders, receives, and processes freight, and stocks and issues inventory using plant resources; these goods are stored in the plant warehouse.

Chugach also uses its own resources to operate and maintain camp facilities for housing employees and contractors on-site. The camp is staffed by a culinary crew, which serves well-prepared meals three times a day.

—The authors can be reached at pjackson@tetra-eng.com or 860-651-4622 and John_Kotrotsios@chugachelectric.com.