Economic growth! Energy independence! Climate change! There are countless arguments for moving beyond fossil fuels for world energy needs. Unfortunately, many hurdles must be overcome before we can feasibly count on other sources of energy to replace coal, oil, and possibly natural gas, which all together provide the lion’s share of the world’s electricity generation and transportation fuels.

Even if there were no greenhouse effect, all of the fossil fuels we rely on will probably be depleted within a few hundred years. If humankind is going to have a future on this planet, at least a high-technology future, it is absolutely inevitable that we’ll have to find an alternate energy pathway.

Figure 1 shows the flow of energy and resource utilization, measured in petajoules (PJ, 1,015 joules; 1 kilojoule = 0.948 Btu) across the energy system of 136 countries for 2007 (the most recent year that such data could be located). 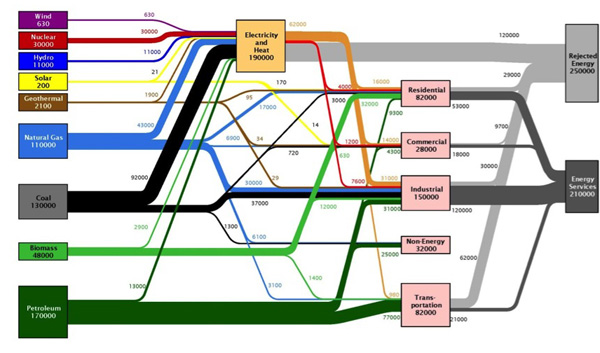 Electricity and heat (E&H) generation is listed midway between the primary sources of energy and the final demand centers. The reason for this is E&H’s role as a secondary source of energy—consuming primary energy sources and supplying energy to end-use sectors. Also in the end-use sector is non-energy, located between the industrial and transportation categories on the right hand side of the chart. Non-energy is the conversion of primary energy sources to durable products such as derived fuels. The grey boxes on the far right quantify “Rejected Energy” and “Energy Services,” referring to energy that’s lost and not used (such as waste heat) energy that is used to perform work, respectively. The size of each box and the thickness of each line is a relative measure of the amount of energy delivered or received.

The total world energy capacity in 2007 was 490,000 PJ. To better understand what all this means, we will follow the flow of energy into and out of electricity and heat generation, which has a total energy capacity of 190,000 PJ. Starting from the top, the primary energy sources flowing into and consumed by E&H are:

The energy from each fuel source not consumed by E&H flows to other demand sectors. For example, only 92,000 PJ, or 70% of coal’s total capacity, is consumed by E&H, with the remaining energy supplied to the Industrial and Non-Energy sectors.

Almost immediately it becomes apparent that every fuel source is used to generate electricity, with coal and natural gas comprising two-thirds of E&H’s energy portfolio. Nuclear, hydro, and biomass are low mid-tier suppliers. The remaining fuels—geothermal, wind, and solar—are all renewable resources that constitue only a small fraction of E&H’s energy supply.

Looking at the output side of E&H, the one aspect of the chart that is blatantly obvious is that most of E&H’s energy output is rejected. That is 120,000 PJ—more than 60% of all energy produced by E&H—is lost and wasted as heat. Quite remarkable!

Only the remaining 75,000 PJ, less than 40%, is supplied to several demand sectors as useful energy to provide work, which in turn rejects some of this supplied energy as wasted heat.

The energy flow diagram can be summarized accordingly:

This suggests that sustainable practices aimed at improving the efficiency of the world energy mix should be targeted to vehicles and electricity generation.

If successful, this would have a tremendous impact on reducing energy usage throughout the economy, eliminate the need to build more power stations, and reduce consumption of petroleum by the transportation industry. The chart also suggests that investing in sustainable solutions to make residential homes and commercial building more energy efficient will have a minor impact on reducing world energy supplies.

To determine the most economical technology for the type of demand for which new capacity is needed, we need to look at levelized costs. Key inputs to calculating the levelized cost of energy (LCOE) include overnight capital costs, fuel costs, fixed and variable operations and maintenance (O&M) costs, financing costs, and an assumed utilization rate for each type of plant (Figure 2). 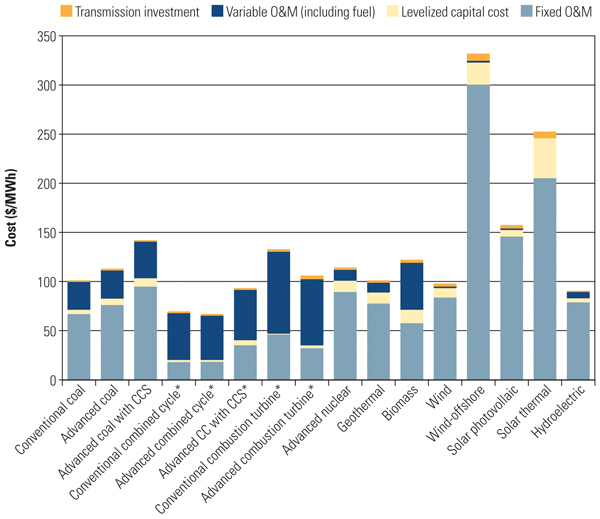 Clearly, the lowest plant costs are for natural gas–fired power. For plants entering service in 2017, the U.S. Energy Information Administration (EIA) recently projected that combined cycle plants would be by far the least expensive, at around $65/MWh. At the other extreme are solar photovoltaic, solar thermal, and offshore wind, at more than $150/MWh, $240/MWh, and $325/MWh respectively.

Traditionally, natural gas had trouble competing on the variable cost portion but was much more capital-efficient to build. Today, coal-fired plants have skyrocketed in cost due to uncertain future fuel prices and environmental compliance. The EIA and others have projected that the spread between coal and natural gas will continue to increase, making gas-fired plants more attractive. This has made it very difficult for other energy sources to compete with gas.

The demands on coal-fired plants have made biomass power stations a competitive option. The levelized costs steadily increase from biomass and geothermal to nuclear and hydro, before skyrocketing to wind and solar power.

Without question, the most important barrier to a larger-scale implementation of all of these low-carbon technologies comes down to one factor: the cost of the technology, and in particular, the private cost born by the organization implementing the technology.

The Bridge to the Future

Any projections on the future of the world’s energy production, consumption, and trends are marked with many uncertainties. World economics, politics, environmental concerns, and new technological advances can alter any projection.

Like it or not, renewable energy has a long way to go to make an impact on any one country’s energy inventory.

Every year more and more power is generated by natural gas and less by coal. Natural gas is a more efficient source of electricity, since it takes 60% more coal to produce 1 kWh of electricity. Fuel-switching power generation to natural gas makes economic and practical sense.

Just about every internal combustion engine could run on natural gas. Natural gas–fueled vehicles could make the impact on reducing petroleum consumption that electric vehicles (EVs) hoped to achieve.

Countries that have capitalized on their shale gas resources have found it to have a profound impact on job growth, consumer costs of gas and electricity, tax revenue, economic growth, and reducing greenhouse gas emissions. Under a scenario that envisions a worldwide momentum towards policies aimed at cutting greenhouse gas emissions, electric utilities and other sectors of the economy will have no other choice but to adopt natural gas as a logical alternative.

Natural gas will buy time to further develop cleaner fuels. Hopefully, on the other side of the bridge there will be a viable renewable energy industry, whether it’s 50 years or the end of the century. But it’s not here today.

—Dr. Barry Stevens is the founder of TBD America Inc., a global technology business development group. A longer version of this article was originally published on his blog. Minor edits for style have been made for this publication.