The term “logical” in the title may not be strong enough. “Only” may be more appropriate. The story however remains the same. We are finding more reserves of natural gas, drilling more, watching prices decline, and yet using only slightly more.

It is clear that the U.S. is between the proverbial “rock and a hard place” with respect to its dependency on fossil fuels. We are indeed a carbon-based economy, and with low prices and abundant availability one would think the demand for natural gas would be sky-high. So then why is the consumption of natural gas stuck in the mud?

A look at the energy industry from source to demand sectors may shed some light on this anomaly. The figure below from the Energy Information Administration shows the big picture: U.S. primary energy consumption by energy source from 1980 to 2010, with projection to 2035.

1. Though renewables will grow substantially in percentage terms through 2035, they will remain only a small part of the U.S. energy mix. Source: EIA

A snapshot of the energy mix shows only a slight shift towards less carbon-intensive fuels over this 55-year period:

Understanding these statistics also requires that we clarify what exactly constitutes renewables. In this analysis, renewable fuels are an aggregate of wood, municipal waste, biomass, and hydroelectricity in the end-use sectors; hydroelectricity, geothermal, municipal solid waste, biomass, solar, and wind for generation in the electric power sector; and ethanol for gasoline blending and biomass-based diesel in the transportation sector.

Not everyone agrees on whether hydropower should be classified as a renewable source of energy. There are many schools of thought, and qualification varies state-by-state. One argument against qualification is that most hydroelectric facilities were built long before the adoption of renewable portfolio standards. Another argument points out that traditional hydroelectric plants interrupt the flow of rivers and can harm local ecosystems, and that building large dams and reservoirs involves displacing people and wildlife. However, unconventional hydropower using currents, waves, and tidal energy to produce electricity is less disruptive and qualifies as renewable.

U.S. energy consumption in 2011 by energy source is shown below. As opposed to the previous figure, this chart breaks out the various energy sources that make up renewable energy.

A closer look at the renewable energy component shows that solar, geothermal, and wind constitute less than 2% of the total energy mix. Whatever their future potential, these renewables are not substantially reducing our thirst for fossil fuels. Reasons for the lack of foothold of renewables include high costs, remote locations and consequent added transmission expenses, and intermittency of generation.

There’s more to this, but it requires a close look in how we use energy, not just generate it. Figure 3 shows the U.S.’s primary energy consumption by source and sector for 2010. The electric power sector sits between source and sector because it holds a dual role of being both a consumer and a generator, and by definition it is not a primary source of energy. 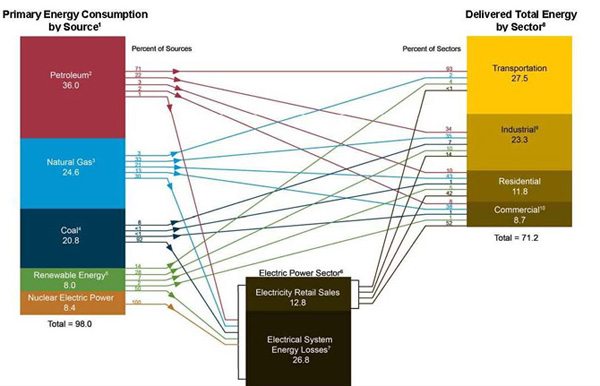 3. Absent a major shift in how the U.S. uses energy, only the electrical generation sector is poised to make significant gains in renewable energy. Source: EIA

On the demand side, electric power generation is the major consumer of fuels (39.6%), followed by transportation (27.5%), industrial (23.3%), residential (11.8%), and commercial (8.7%). Electrical generation is primarily fueled by coal and natural gas and to a smaller degree by nuclear energy. Transportation is fueled almost exclusively by petroleum. Industry is a mixed bag of petroleum, coal, and electricity. Here renewables are ranked fourth and only slightly below electrical consumption. Residential and commercial are somewhat similar in that they run by electricity and natural gas. The takeaway from this figure is that it’s difficult to see a sector other than electrical generation that can truly benefit from and increase the usage of renewable energy absent some paradigm shift in the way the U.S. consumes fuels. 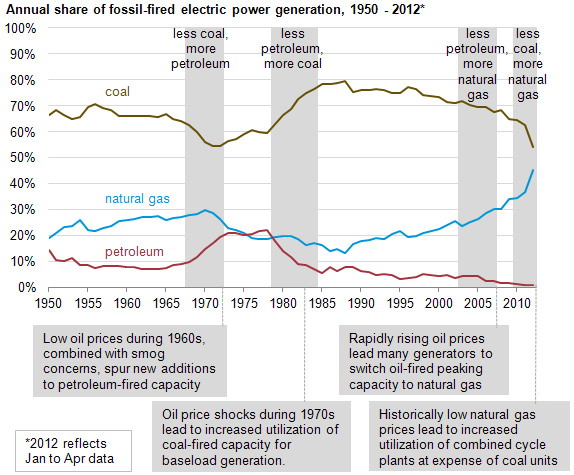 4. Coal’s share of electrical generation has been in decline since the 1980s and has fallen precipitously since the mid-2000s as gas production rebounded and prices fell, while oil’s share has all but disappeared. Source: EIA

The increased consumption of natural gas for electrical generation is due to the combined effect of increased natural gas production, declining gas prices, and an increased use of efficient and low-cost combined cycle technology. Also, due to regulatory pressure to reduce greenhouse gas emissions and pollution from coal-fired power plants, electric utilities have had no choice but to adopt natural gas as a logical alternative.

It’s a fact that natural gas is the cleanest of all fossil fuels. Since gas is an organic compound, it does have a carbon footprint; however, emissions levels of CO2, CO, NOx, SO2, particulates, and mercury are anywhere from 40% to 100% cleaner than coal and 28% cleaner than petroleum.

The point is that while coal will most likely continue its decline in fueling electrical generation facilities, natural gas needs another sector to increase demand and further replace dirty fossil fuels from our energy inventory. The sluggish U.S. economy has reduced expectations for new construction in the industrial, commercial, and residential market, all potential users of natural gas.

This leaves the transportation industry as the only other sector that can make a significant impact on the energy mix by fuel-switching. While there are reports of U.S. hybrid and electric vehicle sales jumping in March, the overall penetration of EV is still far less than many in the industry would have you believe. A March 2012 report in the New York Times stated: “[T]he state of the electric car is dismal, the victim of hyped expectations, technological flops, high costs and a hostile political climate. General Motors has temporarily suspended production of the plug-in electric Chevy Volt because of low sales. Nissan’s all-electric Leaf is struggling in the market. A number of start-up electric vehicle and battery companies have folded. And the federal government has slowed its multibillion-dollar program of support for advanced technology vehicles in the face of market setbacks and heavy political criticism.”

Almost any conventional gasoline and diesel internal combustion engine can be converted to run on compressed natural gas (CNG). No innovations or technological advancements are needed to power vehicles on CNG. Furthermore, natural gas is an abundant resource base that complements U.S. national energy security initiatives. The only barrier is cost, as CNG vehicles currently cost substantially more than conventionally fueled alternatives.

Not that incentives are a good thing, but to play on a level playing field with petroleum, either oil subsides should be reduced or incentives should be given to end users of CNG-powered vehicles. Past federal CNG incentives have expired, and right now there is rhetoric, and little else, on Capitol Hill to do something to stimulate usage of natural gas in the transportation sector.

Taking these factors into consideration, some forward-thinking states such as Oklahoma offer a one-time income tax credit up to 50% of the incremental cost of purchasing a new CNG vehicle from an original equipment manufacturer or to cover the cost of converting a vehicle to operate on an alternative fuel such as natural gas.

There are a few disadvantages of using CNG. These include the limited number of models offered for sale or that can be retrofitted for CNG. A good part of this limitation is due to Environmental Protection Agency regulations that make the CNG certification process rather lengthy and expensive. Also, there are few certified conversion shops and CNG kit suppliers. CNG is less readily available than gasoline and diesel. Conversion is not cheap; converting a passenger vehicle can cost $10,000 for parts and labor.

In closing, like it or not, renewable energy has a long way to go to make an impact on the U.S.’s energy inventory. Natural gas, being the least disruptive fossil fuel, could serve as a “bridge” to a low-carbon future. Natural gas will buy time to further develop cleaner fuels; hopefully, there will be something at the end of the day, whether it takes 25 years or the end of the century. So why are our lawmakers asleep to the needs of the country?

—Barry Stevens, PhD is the founder of TBD America, a global technology business development group. A longer version of this article was originally published on his blog. Minor style edits were made for this publication.